House Ways and Means Committee Chairman Dave Camp will hold a hearing next week to examine the itemized deduction for charitable contributions as part of his committee’s work on comprehensive tax reform. In announcing next week’s hearing, Chairman Camp said, “Because of the critical role that charities play, the committee must hear directly from the charitable community before considering any proposals as part of comprehensive tax reform that might impact their ability to obtain the resources they need to fulfill their missions.”

The charitable contribution deduction is one of the largest tax expenditures in the current tax code, which could make it the target of scrutiny during the process of reforming the tax code as lawmakers look for ways to lower tax rates by broadening the base. By comparison, the low-income housing tax credit (LIHTC), historic tax credit (HTC) and new markets tax credit (NMTC) are relatively inexpensive tax expenditures.

The list below provides some context to show how the LIHTC, HTC and NMTC stack up against the largest tax expenditures in terms of cost. These figures are based on the most recent estimates published by the Joint Committee on Taxation on Feb. 1. Of note, the home mortgage interest tax expenditure is more than 10 times that for affordable rental housing.

Tune in to the Tax Credit Tuesday podcast on February 12 to hear more. 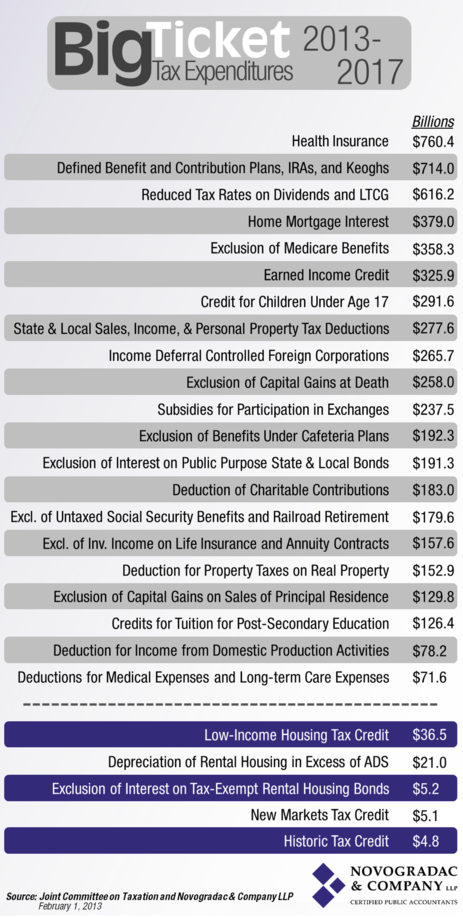