The House Appropriations Transportation, Housing and Urban Development (THUD) Subcommittee approved its $90.9 billion fiscal year (FY) 2023 spending bill June 23, followed by the full committee June 30. According to the committee release, the proposed funding level for the full bill represents $9.9 billion (more than 12%) more than FY 2022. The Committee report accompanying bill text was also released. The full House is expected to consider the committee-reported bill next week.

It bears reiterating that the “regular” annual HUD appropriations in the bill will be considered separately from the proposed one-time supplemental $156 billion in HUD and related housing funding proposed as part of the House-passed Build Back Better reconciliation bill. While negotiations between Senate Majority Leader Chuck Schumer, D-New York, and Sen. Joe Manchin, D-West Virginia on the pending reconciliation bill appear to be gaining momentum recently, the fate of spending in the pending reconciliation is very uncertain and will likely be significantly reduced from the House-passed bill. It is not clear how much, if any, of the $156 billion in one-time housing and community development spending will be retained in a revised reconciliation bill.

Like the FY 2022 THUD bill, the bill includes nearly $2 billion of economic development initiatives, otherwise known housing and community development “earmarks,” an increase of $458 million (30.2%) from FY 2022. While earmarks were controversial, congressional leadership brought them back in FY 2022 with reforms to help facilitate the passage of large spending bills. When members of Congress can cite specific funding for their district they secured, it makes it easier for them to vote for the bill. 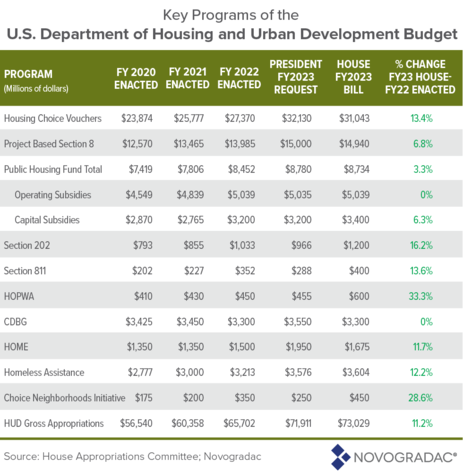 The bill provides $450 million for the Choice Neighborhoods Initiative, which is designed to comprehensively revitalize distressed public and assisted housing communities and is a successor program to the HOPE VI revitalization program, $100 million (28.6%) more than FY 2022 and $200 million (80%) more than the request.

The bill provides $1.68 billion for HOME Investment Partnerships Program (HOME), a $175 million (11.7%) increase from FY 2022 but $275 million (14.1%) the request. For the community development fund (the account funding Community Development Block Grants or CDBG), the bill provides $5.30 billion for an increase of $458 million (9.5%) from FY 2022 and $1.53 billion (40.6%) more than the request. However, as mentioned above, $1.97 billion of this funding is specified via earmarks, so the amount available for CDBG formula funding is $3.3 billion, the same as FY 2022 and $250 million (7.0%) decrease from the request. Because funding for these programs isn’t directly tied to assistance for specific families, but represents funding for future housing and community development activities, it is much more vulnerable than rental assistance funding.

McKinney-Vento Homeless Assistance Grants are proposed to be funded at $3.6 billion, $391 million (12.2%) more than FY 2022 and $28 million (0.8%) more than the request. This amount includes a $3.2 billion set-aside for the continuum of care and rural housing stability assistance programs, and $290 million for Emergency Solutions Grants.

The bill provides $1.2 billion for the Housing for the Elderly (Section 202) program, a $167 million (16.2%) increase from FY 2022 and $234 million (24.2%) more than the request. Within this account, the bill provides $323 million for new capital advances, which the committee estimates will finance about 3,500 new affordable rental homes for seniors. The bill also provides $125 million in renewal funding for service coordinators, which the committee estimates will fully fund 1,600 existing service coordinators.

The bill would provide $600 million for the Housing Opportunities for Persons with AIDS (HOPWA) program to provide housing and supportive services, $150 million (33.3%) more than FY 2022 and $145 million (31.9%) more than the request.

The bill does not include the $40 billion proposed in mandatory spending in the request for new Housing Supply Funds, one to be administered by HUD and the other by the Treasury’s Community Development Financial Institutions (CDFI) Fund. (A related $10 billion proposal, later refined to $7.9 billion, to fund a basis boost proposal for low income housing tax credit properties financed by tax-exempt private activity bonds that finance new construction or substantial rehabilitation that result in a net increase of affordable rental homes is not in the jurisdiction of the House Appropriations Committee.)

Timeline and Factors that May Affect Spending Negotiations

The House and Senate leadership have conducted preliminary negotiations on a top-line FY 2023 discretionary spending amount, as well as allocations for defense and nondefense, but they are not expected to strike a deal after the midterm election. The results of the midterm election are likely to affect those negotiations. It should also be noted that both the House and Senate Armed Services Committees are proposing defense spending authorizations much more than the administration requests and the House Appropriations Committee has approved, likely leading to less non-defense spending and more defense spending in a final FY 2023 spending bill.

Given the limited time in September to pass the Senate and final versions of the FY 2022 spending bills (the House doesn’t plan to hold floor votes until Sept. 13), as well as the desire of many members of Congress to campaign for reelection in their home districts and states, most policy insiders expect Congress to consider a short-term continuing resolution to fund the government starting at the beginning of FY 2023 Oct. 1 and lasting through mid-November or early December after the midterm elections.

Before the end of the 2022 calendar year and during a postelection lame-duck session, Congress may consider a FY 2023 omnibus spending bill containing the annual spending bills. Such a bill could also serve as a vehicle for tax legislation, including tax extenders that expired at the end of 2021, such as the 12.5% increase in 9% LIHTC allocations originally enacted in 2018, and those scheduled to expire at the end of this year.

The midterm election results will likely influence the productivity of a lame-duck session. As of the time of this writing, Republicans are predicted to win a majority in the House and possibly the Senate as well. If Republicans exceed expectations, with a robust majority in the House and several seat margin in the Senate, it may lead to a less productive lame-duck session, with another continuing resolution funding the federal government into the new Congress next year and no tax legislation, as Republicans would want to wait until they are in a position of greater power to negotiate with President Biden on spending and tax legislation.

If Democrats exceed expectations with a lower-than-expected loss of seats in the House and holding onto the Senate, then such results may lead to the passage of an omnibus spending bill that includes a robust tax title in the lame duck. Such tax legislation would be affected by whether the pending reconciliation bill is passed, as the reconciliation bill is likely to include at least some extension of expiring tax provisions, such as the renewable energy production and investment tax credits.