The House Appropriations Transportation-HUD (THUD) Subcommittee released its $56.5 billion fiscal year (FY) 2018 spending bill July 10, which is expected to be approved July 11. According to the committee press release, that funding level represents $1.1 billion (2 percent) less than FY 2017 but $8.6 billion (18 percent) more than the FY 2018 request by President Donald Trump’s administration. For the U.S. Department of Housing and Urban Development (HUD), the bill provides net appropriations of $38.3 billion, a $6.9 billion (22 percent) increase from the FY 2018 request, but $487 million (1.3 percent) less than FY 2017. The level represents about $1.5 billion less than what’s needed to renew HUD rental assistance funding needs during FY 2018. 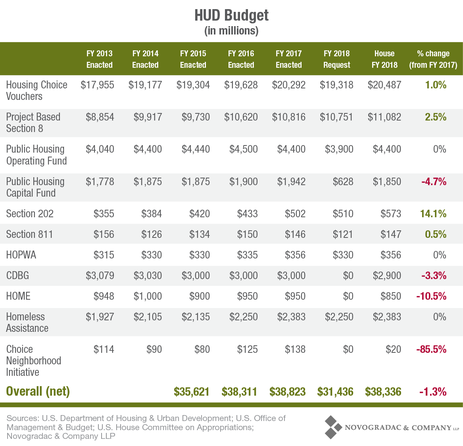 The request provides $11.1 billion for Project-Based Rental Assistance, which is $266 million (2.5 percent) more than FY 2017 and $313 million (3.1 percent) more than the FY 2018 request. While the proposed increase is certainly welcome, the funding level is about $320 million less than needed to renew contracts, according to the National Housing Trust (based on HUD data), and thus could result in short-funding contracts. The bill rejects the budget request’s proposals to establish $50 minimum rents, require increased tenant contributions toward rent–reportedly from 30 to 35 percent of adjusted family income–and institute other proposals to achieve savings from HUD’s rental assistance programs.

Tenant-Based Rental Assistance is proposed to be funded at $20.5 billion, a $195 million (1.0 percent) increase from FY 2017 and a $1.17 billion (6.1 percent) increase from the FY 2018 request. Of that amount, $18.7 billion is for Section 8 Housing Choice Voucher contract renewals, which is $355 million (1.9 percent) more from FY 2017 and $1.13 billion (6.4 percent) more than the request. The subcommittee asserts that this funding level should be sufficient to renew funding for all vouchers in use, however the National Low Income Housing Coalition claims such a funding level will result in a loss of funding for 140,000 vouchers.

As noted for project-based rental assistance, the bill does not adopt the rental assistance reforms from the budget request. For the HUD-Veteran Affairs Supportive Housing (HUD-VASH) program, the bill provides $7 million, which is $40 million (85 percent) less than FY 2017 and equal to the request, and such funding is reserved entirely for Native American veterans, the same amount as in FY 2017. The request also provides $60 million for Tenant Protection Vouchers, a $50 million (46 percent) decrease from FY 2017 and the request. It is unclear whether this level of funding would be sufficient to provide voucher assistance for all tenants in properties whose owners have terminated property-based assistance.

As per House THUD annual spending bills in the past, the bill does not include the request to eliminate the cap on the Rental Assistance Demonstration (RAD) program, nor does it authorize it as a permanent program, as proposed by the request. The FY 2017 omnibus bill increased authorization from 185,000 public housing units to 225,000 public housing units and extended program authorization for public housing conversions to 2020. Nor does the bill allow RAD conversions of Section 202 properties and incremental funding to facilitate such conversions, as proposed by the Senate in its FY 2017 HUD spending bill.

The bill does not eliminate Community Development Block Grant (CDBG) formula grants and the HOME Investment Partnerships Program (HOME), as proposed by the request. However, it cuts $100 million from each program, providing $2.9 billion for CDBG and $850 million for HOME, representing cuts of 3.3 percent and 10.5 percent respectively. Given that funding for these programs aren’t directly tied to specific families (indeed, they represent funding for future housing and community development activities), they are much more vulnerable than rental assistance funding.

McKinney-Vento Homeless Assistance Grants are proposed to be funded at $2.38 billion, level with FY 2017 and $133 million (5.9 percent) more than the request. This amount includes a $2.106 billion set-aside for the continuum of care and rural housing stability assistance programs, and $270 million for Emergency Solutions Grants.

While the bill does not agree to eliminate the Choice Neighborhoods Initiative, which is designed to comprehensively revitalize high-poverty public and assisted housing communities, as proposed by the request, it provides only $20 million, $118 million cut from FY 2017.

The bill does not include the budget’s proposal to eliminate the Housing Trust and Capital Magnet Funds, and the Fannie Mae and Freddie Mac assessments that fund them. HUD announced June 14 $219.1 million for the Housing Trust Fund and the U.S. Treasury’s Community Development Financial Institutions (CDFI) Fund announced June 29 $119.5 million for the Capital Magnet Fund. Fannie Mae and Freddie Mac assessments are not discretionary appropriations, and housing finance reform legislation is expected to address whether Congress wants to continue them. Given the strong support of Senate Democrats for both funds, it is unlikely Congress will eliminate them.

The House Financial Services and General Government Appropriations Subcommittee approved its FY 2018 bill June 29, which rejected the budget’s proposal to eliminate all discretionary grant funding for the CDFI Fund. Instead, the bill provides $190 million, $58 million (23.4 percent) decrease from FY 2017, but $176 million more than the request. The bill also approves a $500 million authorization level for the CDFI Bond Guarantee program, as with FY 2017 and the request.

The full House Appropriations Committee is expected to consider the subcommittee bill before the August recess, but it has not yet scheduled such consideration. The House is anticipated to recess on July 28, but Senate Majority Leader Mitch McConnell, R-Ky., announced that the Senate will remain in session for the first two weeks of August. The Senate THUD Appropriations Subcommittee may also consider its FY 2018 bill before recess, but it is uncertain if and when the full House would consider any annual spending bill.

Even with the extra two weeks for the Senate to meet, given the limited legislative calendar for the rest of July and September and the competing priorities of health care legislation, the debt limit, and tax reform, it is highly unlikely Congress will draft and pass all 12 annual spending bills, including those providing funding for HUD and Treasury before the end of the fiscal year on Sept. 30. Furthermore, there is not yet agreement between the House, Senate and the administration on overall budget levels that would be necessary before spending bills could be enacted.

Senior House Appropriations Committee member Tom Graves, R-Ga., has suggested that the full House consider an omnibus spending bill before the end of the fiscal year, but leadership has not yet agreed with the idea. Most policy insiders expect Congress to consider a continuing resolution (CR) to fund the government in October and November. Presumably before the end of the 2017 calendar year, once overall budget levels have been agreed to, Congress would pass a FY 2018 omnibus spending bill. Such a bill could serve as a “vehicle” for tax reform and/or tax extender legislation.

However, it is also possible, especially if there is difficulty in getting agreement on overall budget levels, that Congress will consider a CR to fund the government for the full 2018 fiscal year.