On Jan. 3, the first day of the 116th Congress, the House of Representatives passed H.R. 21, the Consolidated Appropriations Act including funding for the Agriculture; Commerce, Justice, and Science; Financial Services and General Government, Interior and Environment; State and Foreign Operations; and Transportation-HUD (THUD) annual spending bills, enabling the federal agencies the bills fund to reopen during the partial government shutdown that began Dec. 21.

According the House Appropriations Committee press release, the bill essentially matches the funding levels in the Senate-passed versions of the FY 2019 spending bills. Furthermore, the House passed H.J. Res. 1, a continuing resolution (CR) to provide funding to the U.S. Department of Homeland Security and related agencies through Feb. 8.  Notably, this CR did not provide any funding for a wall on the U.S.-Mexico border.

However, the Senate Majority Leader Mitch McConnell, R-Ky., has indicated that the Senate will not consider any FY 2019 spending bills unless the president has indicated he will sign them, and President Trump has threatened to veto spending bills that do not include at least $5 billion for a wall and other border security funding.

In the meantime, HUD and Treasury operations are extremely limited during the government shutdown, and the programs they operate as well as the people and places those programs serve are at risk.  Absent a new authorization of funding, it is unclear how long those programs can operate, and the pressure will continue to grow.

If the wall funding impasse is solved and H.R. 21 is enacted, the omnibus bill would provide gross appropriations for the U.S. Department of Housing and Urban Development (HUD) of slightly more than $54 billion, a $1.3 billion (2.5 percent) increase from FY 2018, but a $12.8 billion (31.1 percent) more than the FY 2019 request, $860 million (1.6 percent) more than the FY 2019 Republican-led House THUD bill, and equal to the Senate FY 2019 THUD bill. In general, the omnibus bill’s funding level sustains the major HUD funding increases enacted in FY 2018, and provides a few programs with increases.

This overall funding allocation was made possible by the Bipartisan Budget Act of 2018, which set a cap of $597 billion for FY 2019 nondefense spending, which is $18 billion (3.1 percent) more than the FY 2018 cap, but $57 billion (10.6 percent) more than the FY 2019 request. However, given the return of tight defense and nondefense spending caps with sequestration for FY 2020, Congress will need to enact a new budget deal to enable the FY 2020 appropriations process to move forward. 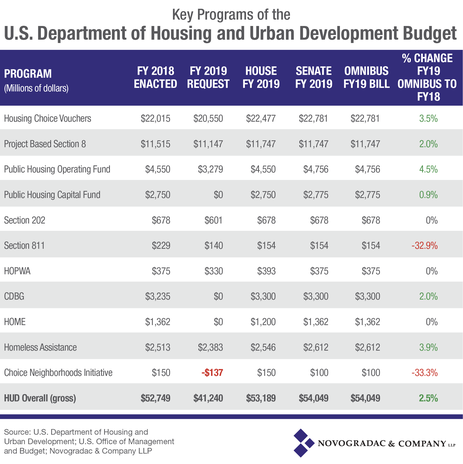 The omnibus bill provides $11.7 billion for Project-Based Rental Assistance, which is $232 million (2 percent) more than FY 2018, $600 million (5.4 percent) more than the FY 2019 request and the same as the GOP-led House and Senate bills. While the proposed increase is certainly welcome, the funding level is about may be less than needed to renew contracts, according to the National Housing Trust (based on HUD data). The bill rejects the budget request’s proposals to establish $150 minimum rents; require increased tenant contributions toward rent from 30 percent of adjusted family income to 35 percent of gross family income; and institute other proposals to achieve savings from HUD’s rental assistance programs.

The omnibus bill does not eliminate Community Development Block Grant (CDBG) formula grants and the HOME Investment Partnerships Program (HOME), as proposed by the request. Furthermore, it provides $3.3 billion for CDBG (which is $65 million or 2 percent more than FY 2018 and equal to the GOP-led House bill) and $1.362 billion for HOME (which is equal to FY 2018 and $162 million or 13.5 percent more than the Republican-led House bill).

The bill provides $678 million for the Housing for the Elderly (Section 202) program, equal to FY 2018 and the Republican-led House bill, but $77 million (12.8 percent) more than the request. The bill also provides $51 million for new capital advances or senior preservation rental assistance contracts (SPRACs), which is $54 million less than FY 2018, but still only the second time Congress has provided such funding since 2011.  The Housing for Persons with Disabilities (Section 811) program is funded at $154 million, equal to the GOP-led House bill and $14 million (10 percent) more than the request, but a $75.6 million (32.9 percent) cut from FY 2018. The budget would provide $375 million for the Housing Opportunities for Persons with AIDS (HOPWA) program to provide housing and supportive services, equal to FY 2018 $45 million (13.6 percent) more than the request, but $18 million (4.6 percent) less than the Republican-led House bill.

The bill does not agree to eliminate the Choice Neighborhoods Initiative, which is designed to comprehensively revitalize high-poverty public and assisted housing communities, as proposed by the administration’s request, which also called for rescinding $137 million in FY 2017 funding.  Instead, the bill provides $100 million, $50 million less than FY 2018 and the GOP-led House bill.

The bill does not include the budget’s proposal to eliminate the Housing Trust and Capital Magnet Funds, and the Fannie Mae and Freddie Mac assessments that fund them. HUD announced May 1 $266.8 million for the 2018 Housing Trust Fund allocations. The U.S. Treasury’s Community Development Financial Institutions (CDFI) Fund has not made funding awards for the 2018 round of the Capital Magnet Fund yet, and cannot do so during the shutdown.  Indeed, the administration had proposed to rescind the $142 million expected to be available, but the Senate rejected the rescission. Housing government sponsored enterprises (GSEs)—Fannie Mae and Freddie Mac—assessments to fund both programs are not discretionary appropriations, and housing finance reform legislation is expected to address whether Congress wants to continue them. Given the strong support of House and Senate Democrats for both funds, it is unlikely Congress will eliminate them.  However Acting Federal Housing Finance Agency (FHFA) Director Joseph Otting, who is also the Comptroller of the Currency, could choose to block the transfer of 2018 allocations and/or suspend the 2019 assessments.  Mark Calabria, currently the chief economist for Vice President Pence, has been nominated to be the permanent FHFA director, but the Senate Banking Committee has not yet scheduled a hearing on his nomination.  It is unclear whether Otting or Calabria will support continuing the GSE allocations.

The omnibus bill includes $250 million for the CDFI Fund, level with FY 2018 and the Senate bill, but a $236 million (94.4 percent) increase from the FY 2018 (and FY 2019) request and $24 million (15.7 percent) increase from the Republican-led House bill.  Congress rejected the administration’s proposals to eliminate all grant funding and only provide $14 million in administrative funding for the new markets tax credit and CDFI Bond Guarantee programs.  Within this amount, the bill provides $160 million for financial awards and technical assistance.  The omnibus also provided $500 million in guarantee authorization level for the CDFI Bond Guarantee program level with FY 2018.

It is unclear at this point how Congress and the administration will end the impasse, and the president has threatened that the shutdown may continue for “weeks.” It is also possible that if the impasse drags on, the House will choose to revise the omnibus to reflect more House Democrat priorities instead of largely adopting the Senate funding priorities. However, such revisions are meaningless unless a solution addressing the border wall dispute is found.

The dispute also scuttled efforts to address tax extenders, tax corrections and disaster tax relief at the end of the last Congress, some of which had been planned to be addressed in the legislation on funding the government.  House Ways and Means Committee Chairman Richard Neal, D-Mass., has expressed his intent to consider tax extenders early this year, but unless the shutdown is addressed, it appears unlikely that such tax legislation can be advanced quickly.