The House released March 9 a $1.5 trillion omnibus fiscal year (FY) 2022 spending bill, providing discretionary funding for all federal agencies, including the U.S. Department of the Treasury and the U.S. Department of Housing and Urban Development (HUD), as authorized by the 12 appropriations subcommittees, as well as two supplemental funding bills providing $13.6 billion to support Ukraine and $15.6 billion to manage coronavirus at home and abroad.

Given the limited time before the existing continuing resolution (CR) funding the federal government expires March 11, the House also plans to consider another short-term CR through March 15 to prevent a federal government shutdown in case Congress is unable to pass the omnibus before the March 11 deadline. The House is expected to pass both pieces of legislation March 9 before House Democrats depart for their annual retreat in Philadelphia. After the House acts, the Senate is expected to consider and pass the FY 2022 omnibus bill, but timing is uncertain. Whenever it reaches his desk, President Joe Biden is expected to sign it.

Unlike the FY 2021 omnibus, the FY 2022 bill does not include a tax title, so there are no provisions to extend the 12.5% increase in low-income housing tax credit (LIHTC) allocations, nor to extend the renewable energy production tax credit (PTC), nor the Internal Revenue Code Section 45L new energy-efficient home tax credit, which were among the roughly three dozen tax provisions that expired at the end of 2021. 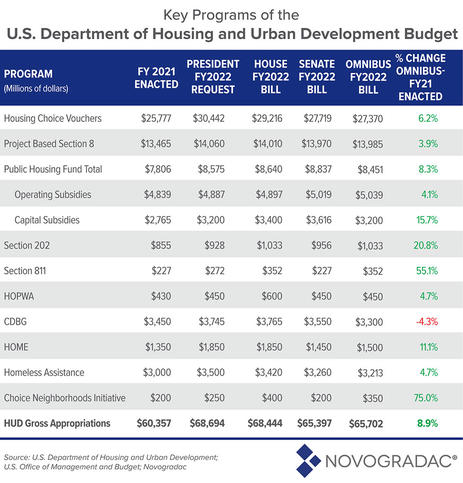 For the HUD-Veteran Affairs Supportive Housing program, the omnibus provides $55 million, with $5 million of such funding reserved for Native American veterans. The total is $10 million more than FY 2021, $50 million (10 times) more than the request, $30 million (120%) more than the House and equal to the Senate bill. The legislation also provides $100 million for Tenant Protection Vouchers, $16 million less than FY 2021, but equal to the request, House and Senate bills.

The final bill does not include the request to eliminate the September 2024 sunset on the RAD program, nor does it authorize an increase in the public housing conversion cap. The FY 2018 omnibus increased authorization from 225,000 to 455,000 public housing apartments. As expected, the final FY 2022 bill does not provide incremental funding to facilitate such conversions, as proposed by the request ($50 million). However, the bill does extend eligibility of RAD conversions to Section 202 senior preservation rental assistance contracts and Section 811 Supportive Housing for People with Disability properties, exempts Section 202 conversions from the fair market rent cap to accommodate service provision and coordination and allows public housing conversions to continue participating in the Jobs Plus Initiative.

McKinney-Vento Homeless Assistance Grants are funded at $3.21 billion, $213 million (7.1%) more than FY 2021, but $287 million (8.2%) less than the request, $207 million (6.1%) less than the House bill and $47 million (1.4%) less than the Senate bill. This amount includes a $2.81 billion set-aside for the continuum of care and rural housing stability assistance programs and $290 million for Emergency Solutions Grants. It also provides $107 million to continue implementation of comprehensive approaches to preventing and ending youth homelessness.

The final legislation would provide $450 million for the Housing Opportunities for Persons with AIDS program to provide housing and supportive services, $20 million (4.7%) more than FY 2021, equal to the request and Senate bill, but $150 million (25%) less than the House bill.

The final appropriations bill includes $295 million for the CDFI Fund, $25 million (9.3%) more than FY 2021, $35 million (10.6%) less than the request and House bill, and $65 million (18.1%) less than the Senate bill. Within this amount, the bill provides $173 million for financial awards and technical assistance. The omnibus also provided $500 million in guarantee authorization level for the CDFI Bond Guarantee program level with FY 2021 and prior fiscal years.

Despite the best efforts of LIHTC advocates, the omnibus did not include a legislative fix the American Rescue Plan Act’s (ARPA’s) $350 billion for the Coronavirus State and Local Fiscal Recovery Fund to facilitate the use of such funding as gap financing loans for LIHTC properties. While there are potential work-around solutions to the obstacles in the ARPA statute for such loans, the legislative fix would have made it much easier. Although there isn’t a substantial federal cost for such a proposal, the fact that ARPA was passed on a partisan basis presented a political challenge to including a fix to it in a bipartisan bill. It is unclear what future legislation could carry such a fix.

Despite the timing uncertainty mentioned above, Congress is poised to pass and then President Biden to sign the legislation. With the end of the FY 2022 appropriations in sight without a tax title, that means there is one less legislative vehicle to address the tax provisions that expired at the end of 2021, such as the 12.5% LIHTC allocation increase, PTC and 45L.

Many of the 2021 expiring tax provisions were expected to be addressed in the Build Back Better Act (BBBA), the reconciliation bill stalled due to concerns from Sen. Joe Manchin, D-West Virginia. It also should be noted that the latest iteration of BBBA included more than $150 billion in supplemental housing and community development funding that would be provided to HUD and CDFI Fund in addition to the FY 2022 appropriations. However, the status of such supplemental funding is very uncertain.

After President Biden’s March 1 State of the Union Address, Manchin signaled that he is willing to negotiate a smaller reconciliation bill, which the Senate may begin to consider some time after the Supreme Court nomination process starting March 21 and the Senate returns from the Easter recess April 25. Such a smaller reconciliation bill appears likely to include much of the $325 billion of the green energy tax incentives, including extensions and expansions of the PTC and the renewable energy investment tax credit, but the fate of the LIHTC proposals (including the 12.5% LIHTC allocation increase extension), the neighborhood homes tax credit and the more than $150 billion in spending is less clear.

If the efforts to resurrect the reconciliation bill falter, Congress is expected to consider a traditional tax extenders bill at some point, although timing for it is uncertain and may be delayed as late as a post-midterm election lame duck session.

Also, with the conclusion of the FY 2022 process, attention will turn to the FY 2023 budget request. Despite the fact that the typical deadline for the annual budget request is the first Monday in February, the administration has not yet announced when it plans to release its FY 2023 request, but it could be as early as the week of March 21. When it does, however, the administration is expected to include a “Greenbook” of tax proposals. Novogradac will summarize the budget request and Greenbook when it is available.