The release of Fannie Mae’s and Freddie Mac’s Securities and Exchange Commission 10-K filings for 2017 show that while single family volume decreased over 2016, multifamily volume increased. Still, the Housing Trust Fund (HTF) and Capital Magnet Fund (CMF) both should receive larger contributions over 2016.

The housing government sponsored entities (GSEs) Fannie Mae and Freddie Mac are required by the Housing and Economic Recovery Act (HERA) of 2008 to contribute to the HTF and the CMF. Contributions to the HTF and the CMF are based on 4.2 basis points of annual new business purchases, and allocations from 2017 are expected to be transferred to the U.S. Department of Housing and Urban Development (HUD) for HTF and Treasury Department for CMF in the coming weeks.  Shortly thereafter, HUD will distribute the funding according to the HTF formula to the 50 states, Washington, D.C., and U.S. territories. In 2017, HUD distributed $219 million in HTF funding to states and territories.

Once funding is distributed to states, each will allocate its HTF funding based on its HUD-approved HTF allocation plan.

The U.S. Treasury Department’s Community Development Financial Institutions (CDFI) Fund holds a national competition among nonprofit housing developers and CDFIs for the CMF funding.  In 2016, the CDFI Fund awarded $91 million in CMF funding to 32 CDFIs and nonprofit developers. During the summer of 2017, the CDFI Fund published a notice of funding availability (NOFA) for the CMF. Awards for the 2017 round of funding are expected to be announced soon.

Based on the GSEs’ most recent SEC filings, Novogradac & Company estimates that the HTF will receive about $266 million and the CMF will receive about $143 million. Of note, HERA mandated 25 percent contribution to the HOPE Reserve Fund, which last year was $106 million, is no longer required of the GSEs.

Each state is due to receive at least $3 million, the small state funding minimum. The minimum funding level accounts for $153 million in HTF funding, or about 58 percent of Novogradac’s estimate. The remaining $113 million in estimated HTF funding is distributed to those states that are eligible for more than the small state minimum, based on the HTF formula.

The table below details Novogradac & Company LLP’s rough estimates of the HTF allocation to each state, using the same HTF formula factors from 2017 (which will be updated for 2018): 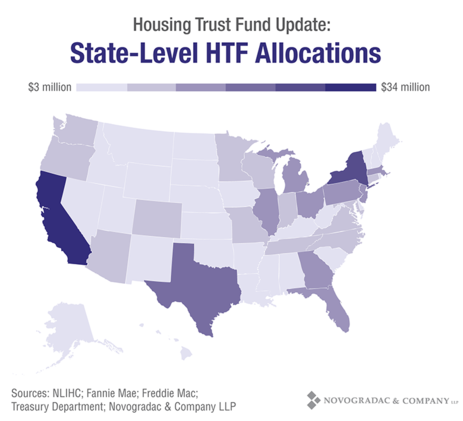 The Future of the HTF and CMF

Recently there had been questions as to whether the Federal Housing Finance Agency (FHFA) would continue the GSEs’ contributions to the HTF and CMF in 2018, prompted at least in part by the Treasury draw triggered by the deferred tax asset write-down resulting from the enactment of the new tax law. On February 14, FHFA announced it would not suspend the allocations. FHFA concluded that the draw from Treasury was not a result of underlying financial instability of the GSEs, but rather the effects of the reduction of the corporate tax rate from 35 percent to 21 percent on GSE deferred tax assets. House Financial Services Committee Chairman Jeb Hensarling, R-Texas, questioned FHFA Director Watt on the authority of this decision, but it is unclear whether Watt will reconsider.

It is important to note that whatever happens to the 2018 allocations, the fate of the 2019 allocations is still uncertain.  The Trump administration’s fiscal year 2019 budget request calls for eliminating the HTF and CMF.  And although Congress may not agree – just as it ignored the administration’s similar request for FY 2018 – Watt’s term as director ends in January, giving President Trump an opportunity to nominate a new director who could decide to suspend contributions to the programs.