The Housing Trust Fund (HTF)–created by the Housing and Economic Recovery Act of 2008–will be funded by contributions based on 4.2 basis points of Fannie Mae’s and Freddie Mac’s annual new business purchases. The 2015 allocation will be transferred to the U. S. Department of Housing and Urban Development (HUD) within the first 60 days of 2016. HUD is expected to distribute HTF allocations to states in the first half of 2016. Each state is expected to draft and approve an HTF allocation plan, similar to the low income housing tax credit (LIHTC) qualified allocation plan (QAP), which will determine how HTF funding will be distributed to particular developments in the second half of 2016.

It will be the first such funding of the HTF, because the Federal Housing Finance Agency (FHFA) suspended contributions in December 2008 due to concerns about the fiscal solvency of Fannie and Freddie. On Dec. 11, 2014, FHFA Director Mel Watt instructed Fannie Mae and Freddie Mac to set aside HTF and Capital Magnet Fund (CMF) allocations throughout 2015. HUD published interim HTF regulations on Jan. 30, 2015. 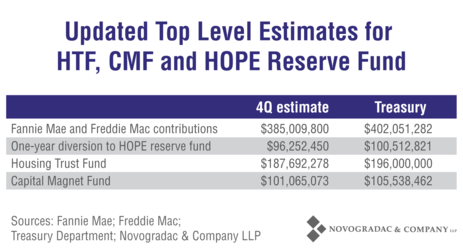 Following are Novogradac & Company LLP’s estimates of the HTF allocation to each state.

In the tables above and below, the first column is based on Fannie Mae’s and Freddie Mac’s quarterly 10-Q filings for the past four quarters and the second is based on the Treasury Department’s projections from earlier in 2015:

Meanwhile, new developments are pending for the CMF. Reports indicate updated CMF guidance and a NOFA will be released soon. Estimates suggest the next funding round will provide between $101 million and $105 million, a substantial increase over the $80 million appropriated in 2010. CMF funding will be transferred to the Community Development Financial Institutions (CDFI) Fund within the first 60 days of 2016 and an award announcement could be made in the first half of 2016.