Some states fail to use and then subsequently abandon some of their private activity bond (PAB) volume cap.  When evaluating the cost of proposals affecting private activity bond cap utilization, the Congressional Joint Committee on Taxation (JCT) assumes that a certain amount of bond cap will continue to be abandoned annually.  If the amount of abandoned bond cap increases, the cost of proposals such as the minimum 4 percent rate for tax-exempt bond financed low-income housing tax credit (LIHTC) developments that facilitate the usage of bond cap will in turn likely increase.

Fortunately, in 2016, the Council of Development Finance Agencies (CDFA) reported that the amount of bond cap abandoned was reduced from $10.5 billion in 2015 to $9.6 billion in 2016.  While still historically significant, the trend in bond cap utilization is a positive one, and that should help lower the cost of proposals affecting bonds.

An example of this effect can be seen in the proposal to allow states to convert up to 18 percent of a state’s unused PAB cap to be used instead for 9 percent LIHTC allocations.

The table below illustrates how bond conversion proposals and bond use have changed over the years, as well as how bond use changes have affected the estimated cost of bond conversion proposals. The table compares the various versions of the Obama administration’s bond conversion proposal from the FY 2013-2017 proposed budgets with the maximum PAB cap eligible to be converted into 9 percent LIHTC allocations, the resulting maximum nine percent LIHTC allocations, the Joint Committee on Taxation (JCT) revenue score for each version, and the calendar year amounts of PAB cap abandoned, as reported by the Council of Development Finance Agencies (CDFA). 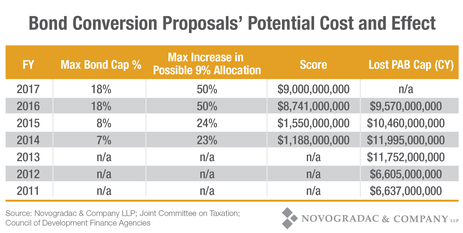 Skeptics argue that as the economy recovers, the current upward trend in bond cap utilization will reduce the amount of carry-forward available for conversion, reducing the potential effectiveness of the bond cap conversion. They also argue that because the amount of carry-forward abandoned varies widely by state, the bond conversion proposal would not increase the amount of LIHTC in each state fairly or consistently. For example, New York, Washington and Utah consistently use their entire PAB cap, and thus don’t regularly have unused PAB cap that could be converted.

Advocates of the bond conversion proposal argue that the prevalence of abandoned PAB cap means that the proposal would be utilizing mostly, if not entirely, unused cap to address pressing affordable rental housing needs.