Community development tax incentives have tangible positive impacts on the states and individuals they serve. The presidential caucuses and primaries are a useful time to highlight those impacts, as it raises awareness and provides support for advocates who specialize in these community development tax incentives. This look at Nevada (the third in the series) follows a profile on New Hampshire.

Census Bureau data shows a number of Nevada’s demographic characteristics are similar to those of the United States as a whole. The unemployment rate in Nevada (3.8 percent) is only slightly higher than the unemployment rate of the U.S. (3.6 percent). The poverty rate is also similar – Nevada’s rate is 14.2 percent, while the nation’s is 14.6 percent. However, there is a bigger discrepancy in median household income. Nevada’s is lower, at $58,003 per year, while the nation’s median household income is $63,179 per year. Despite this lower household income, housing statistics are similar: Median rent for a two-bedroom home in Nevada is $946 per month compared to the nation’s median of $964 per month. And, according to the Joint Center of Housing Studies, nationwide, 47.5 percent of all renter households are cost-burdened, which is similar to the Nevada rate of 46.9 percent. There is a total of 90,292 renter households in Nevada that are extremely low-income, and out of those 90,292 households, 79 percent are severely cost-burdened.

According to the National Low-Income Housing Coalition, Nevada has a shortage of 73,158 affordable and available rental homes. The LIHTC is an important tool used in Nevada to build affordable rental homes. According to the National Council of State Housing Finance Agencies, the LIHTC has produced 31,998 affordable rental homes (including those financed by both 9 percent and 4 percent LIHTC) in Nevada since its inception in 1987. In 2018, 1,984 affordable homes were produced using both 9 percent and 4 percent credits. Out of these homes, 1,056 were new construction, and 928 were acquisition/rehabilitation.

The affordable homes LIHTCs helped finance in 2018 were targeted towards the elderly (50 percent of homes), people with disabilities (5 percent), rural populations (15 percent), families (35 percent), and veterans (10 percent). The special efforts made to house the elderly is important, because according to the Census, Nevada’s population is growing larger and older. Additionally, the veteran population in Nevada stands slightly higher (9.5 percent of the civilian population 18 years and over) than the U.S. average (7.7 percent). The map below illustrates the geographical dispersion of LIHTC properties in Nevada. 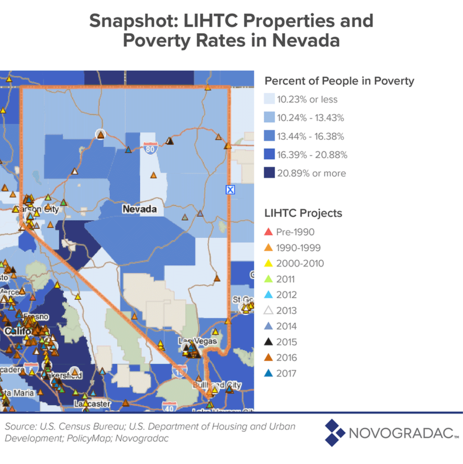 According to the New Markets Tax Credit Coalition, between 2003 and 2019, qualified low-income community investments totaled $366.7 million in Nevada. This capital has been used to create 1,400 jobs (from 2003-2015). From 2013 to 2019, NMTCs helped fund 27 projects  including healthcare facilities, centers for homeless children, and affordable homes.

According to the National Trust for Historic Preservation, Nevada has had five federal historic tax credit projects between fiscal year (FY) 2002 through 2018. According to the Annual Economic Report, completed by the National Park Services in collaboration with Rutgers University, the HTC has brought an increase in employment, gross domestic product (GDP) and income between FY 2014 and 2018. The HTC has increased Nevada’s GDP by $1.3 million, and has increased Nevada’s income by almost $1 million dollars. HTCs have been used in Nevada to fund school buildings and fire stations. One example of a federally funded HTC property is the Tyson House, which is historic because of its architecture. The nomination application submitted by Paula Bogosian describes it as an increasingly rarer representation of the early 1900’s in Reno’s past.

Finance Committee member Sen. Catherine Cortez Masto, D-Nev., has been a strong supporter of the investment tax credit and has paved the way for extension. In mid-2019, she introduced S. 2289, the Renewable Energy Extension Act of 2019, which would extend the credit for five more years. Former Sens. Dean Heller, R-Nev., and Harry Reid, D-Nev., were also big proponents of renewable energy. Nevada ranks 6th nationally for most solar energy produced and as of 2016, the top in the nation for solar capacity per capita, according to the Solar Energy Industries Association. Out of the state’s electricity, 13.3 percent of it comes from solar, and that electricity has powered approximately 587,546 homes. As of 2019, the solar industry has created a total of 6,680 jobs in Nevada. The table below lists some of the positive impacts that these community development tax credits have had on the state of Nevada. According to the American Wind Energy Association, as of 2019, Nevada has an installed wind capacity of 152 MW. This wind capacity powered approximately 35,400 homes in 2018, and the wind industry has created more than 500 jobs in Nevada. 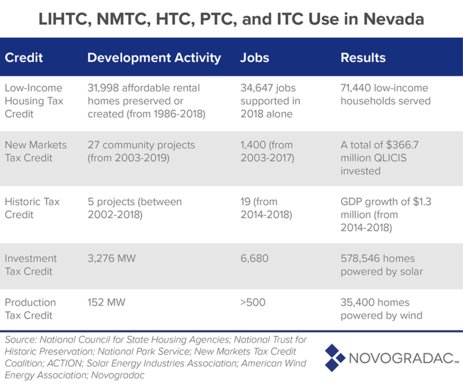 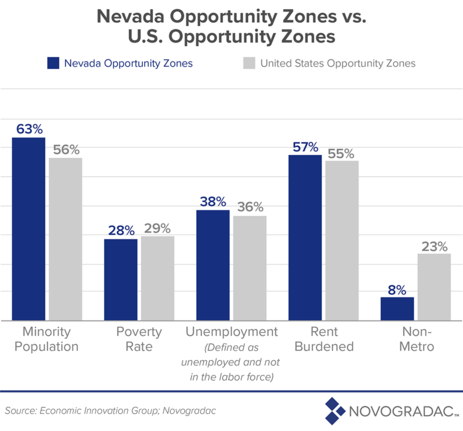 NPS Report: HTC Contributed $8 Billion in Investments in 2021, the Most in Any Given Year in the History of the Incentive
Tuesday, October 4, 2022
Experts Weigh In on the State of the Nation’s Housing Market, Provide Data Driven Policy Solutions
Friday, September 30, 2022
Novogradac LIHTC Working Group Comments on NCSHA’s Recommended Practices
Thursday, September 22, 2022
END_OF_DOCUMENT_TOKEN_TO_BE_REPLACED