Previously a discussion in this space illustrated the adverse effects of a reduced corporate tax rate and the House tax reform blueprint on low-income housing tax credit (LIHTC) equity pricing.  Depending on how tax reform is written and if it were to be enacted, the amount of LIHTC equity raised annually could be reduced by as much as 17 percent or more, a loss of as much as $2.2 billion and 16,000 affordable homes per year or more.  Given the existing shortfall of more than 3 million affordable homes and more than 11 million families paying more than half their income on rent, that reduction would make a bad situation even worse.

Congress could take two steps to make up for this loss of LIHTC equity under a lowered corporate tax rate and enable, at a minimum, the same level of affordable rental housing production.

Investors in LIHTC properties receive tax benefits from both tax credits and tax losses.  The benefits from the tax losses generally equal 35 percent (corporate tax rate) of the amount invested.  If an investor contributes $1.00 in equity for every $1.00 in tax credits, then she receives tax loss savings of 35 cents over the 15+ year investment term.   If the corporate tax rate is reduced, for example, to 25 percent, investors would be still able to claim the $1 in tax credits, but the value of the tax losses are reduced to 25 cents.  If the loss of the 10 cents in the value of tax losses were to be reallocated as tax credits, then the amount of investment would generally be held harmless under a lowered corporate tax rate.  This observation leads us to our two step recommendation.

Step one is to increase the amount of allocable LIHTCs.  This increase is generally revenue neutral over the 15-year compliance period if the tax savings for losses at higher rates are re-allocated as tax credits. The chart below illustrates the needed allocation increase at various corporate tax rates to ensure affordable rental housing production is maintained.

Step two is to modernize the formula by which the annual LIHTC percentage is determined to ensure that all developments financially feasible today remain so.  While there are many developments that have excess basis and thus would not need a higher LIHTC percentage in order to qualify for more credits, there are also many developments that would not qualify and  would not be financially feasible.  The LIHTC percentage formula under current law already does not truly capture the cost of capital for private investors, as it is based on after-tax federal government borrowing rates.  Congress helped to address this problem when it made permanent the 9 percent floor in December 2015.  However, as interest rates rise from historical lows, the problem with the formula will once again manifest itself, as the flawed formula does not adequately respond to a rise in interest rates and associated investor yield hurdles.

With a lower corporate tax rate this problem is worsened.  To address both of these problems, the formula could be modernized.  Under current law, the annual tax credit percentage formula is based on the average of the mid-term and long-term applicable federal rates (AFR), reduced by 28 percent, and discounted on a present value basis over a 10-year period designed to cover either 70 or 30 percent of eligible costs.  The present value calculation assumes an investor receives the first year’s tax credit on the same day the investment is made.

Under a revised formula, the 28 percent discount would be eliminated and 150 basis points would be added to the average of the mid-term and long-term AFRs.  Also, the present value discount would be delayed by two years to reflect the fact that private investors generally invest a significant amount of capital well in advance of when they can start claiming LIHTC, and the first year LIHTC is generally less than a full year, given the lease-up rule.  Lastly, the resulting LIHTC rate would be adjusted based on the change in corporate tax rates.  For example, if the corporate rate is reduced from 35 percent to 25 percent, then on a straight percentage basis, the LIHTC rate would be increased by 10 percent.  See the chart below of how the LIHTC rates would be adjusted.

It is important to note that this proposal to address the loss of LIHTC equity through revising the discount formula is not mutually exclusive with the current law minimum 9 percent rate or the bipartisan, bicameral-supported proposal to establish a minimum 4 percent rate.

The chart below illustrates the effect of the proposal on annual LIHTC rates under various corporate tax rates. 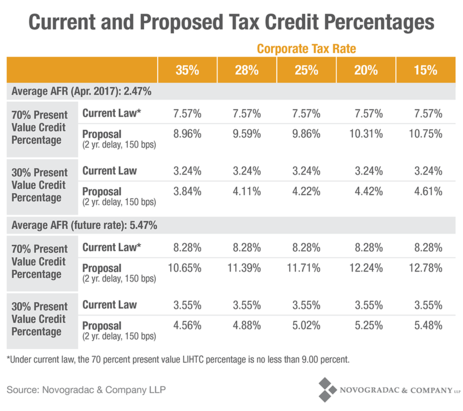 This proposal to modernize the LIHTC discount formula and reallocate tax savings from the LIHTC resulting from lowering the top corporate tax rate to increasing LIHTC allocations would ensure that, at a minimum, LIHTC investment and production is maintained under a lower corporate tax rate.  The proposal would also ensure financial feasibility of LIHTC developments through a higher annual credit percentage and create a formula that is more responsive to changing market interest rates and investor cost of capital.