On Nov. 8, Donald Trump was elected president, likely winning 306-232 in the projected Electoral College vote, according to the Associated Press (AP).  Michigan and Arizona have yet to be called, but are likely to go for Trump, and New Hampshire is also uncalled, but is expected to go for Secretary Hillary Clinton.  Clinton is ahead in the popular vote and appears likely to keep that lead when the votes are confirmed. Although the Electoral College vote is decisive, Clinton’s popular vote win will be one of the very few talking points for Democrats to push back on the Republican claims of a broad electoral mandate.

President
With Trump as president, it is uncertain what he will pursue with regard to affordable housing, community development and renewable energy.  Trump’s father developed a fair amount of affordable but unsubsidized rental housing, and Trump appeared at the National Association of Home Builders’ August board meeting in Florida to express his support for housing development in general.  Trump also has mentioned on the trail that he was “OK” with the renewable energy production tax credit.  Perhaps Trump’s most direct tie to community development tax credits is his Trump International Hotel in Washington, D.C., which was partially financed by historic tax credits.

Nevertheless, tax policy insiders believe that Trump will pursue comprehensive tax reform, using the House Republicans’ tax reform blueprint as a serious starting point for negotiations.  With the Congress in Republican hands, tax reform could be partisan; with budget reconciliation, Republicans would only need 51 votes to pass tax reform legislation in the Senate instead of the usual 60 votes for most legislation.  In that scenario, the community development tax credits would be at risk.

However, it should also be noted that tax legislation enacted under budget reconciliation rules is limited to 10 years.  President George W. Bush employed reconciliation to advance his tax reform priorities, but they were altered by President Barack Obama.

Senate
According to AP, Republicans retained control of the Senate with at least 51 and likely 52 seats in the next Congress, while there will likely be 46 Democrats and two Independents, Sens. Bernie Sanders of Vermont and Angus King of Maine, who generally vote with Democrats. The race in Louisiana to replace retiring Sen. David Vitter will go to a December run-off between Republican candidate, Louisiana state treasurer John Kennedy facing off against Democratic candidate Foster Campbell.  Kennedy will be heavily favored. 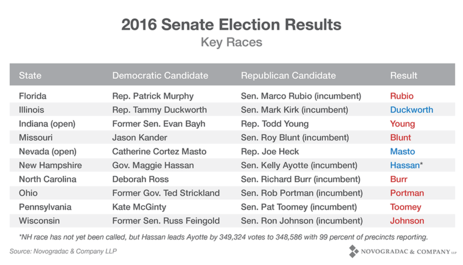 In this election there were 24 Republicans up for reelection—including seven in states where President Obama won twice and two in states which Obama won once—and only 10 Democrats, including none in states where President-elect Trump, Gov. Mitt Romney or Sen. John McCain won.  In 2018, the map flips, where 25 Democrats are up—including five states where Trump, Romney, and McCain won, as well as three states where Trump prevailed—and only eight Republicans are up, including just one—Nevada— in a state where Obama and Secretary Clinton won. Absent a dramatic change in the political environment, it appears likely that the Senate will remain in Republican hands over the course of the next four years of President-elect Trump’s administration.

Republicans must fill Coats’ seat.  Republicans under consideration for a seat are Sens. Roger Wicker, R-Miss., Jeff Flake, R-Ariz., and Deborah Fischer, D-Neb. For Democrats, there likely won’t be any changes on the committee.

House
All 435 seats in the House of Representatives were up for re-election. Currently, there are 246 Republicans, 186 Democrats, and three vacancies–two of which were previously held by Democrats and the other held by a Republican. Forty-six representatives will not return to the House in the next Congress because they are retiring, ran for higher office, or lost their primary election, of whom 27 are Republicans and 19 are Democrats.

According to the AP, Republicans have been declared the winner in 236 seats, Democrats in 191 seats, and eight seats are still uncalled.  Two of those races are in Louisiana, and will be heading for run-off elections in December. One of those run-off elections will be between two Republicans and thus will be retained by Republicans, and the Republican candidate will be heavily favored over the Democratic candidate in the other.  Assuming those races proceed as predicted, and the leading candidates in the remaining six races are eventually confirmed, Republicans will have 239 seats and Democrats will have 196.

Ways and Means Committee
With Republicans retaining control of the House, Rep. Kevin Brady, R-Texas, will remain chairman of the Ways & Means Committee.  Of the 39 current members of the Ways and Means Committee, two did not seek re-election and are retiring: Reps. Charlie Rangel, D-N.Y., and Jim McDermott, D-Wash. Another two are seeking higher office: Reps. Charles Boustany, R-La., and Todd Young, R-Ind. Boustany failed to advance to the run-off election, and Young was elected the Senate.  Most of the remaining 35 were re-elected; only Rep. Bob Dold, R-Ill., failed to win reelection.

There are likely five seats to be filled on the committee, three Republican and two Democrats. Among Republicans under consideration are Reps. Carlos Curbelo, R-Fla., Bradley Byrne, R-Ala., and Andy Barr, R-Ky. Among Democrats in the running are: Reps. Brian Higgins, D-N.Y.—who was on the committee before the Republicans took the House in 2010, and a female member of the Congressional Black Caucus, likely either Rep. Marcia Fudge, D-Ohio, or Rep. Terri Sewell, D-Ala.

More to Come
Look for the December issue of the Novogradac Journal of Tax Credits to read more about what these results mean for the low-income housing tax credit (LIHTC), new markets tax credit (NMTC), historic rehabilitation tax credit (HTC) and renewable energy communities. Elections are reminders of the importance of continued advocacy for affordable housing and community development programs.

Data Collection a Significant Challenge When Using Targeted Populations Approach to NMTC Financing
Tuesday, January 31, 2023
All But a Small Percentage of Congressional Districts have QLICI Projects through FY 2020
Friday, January 27, 2023
2023 Will be a Busy Year for the Renewable Energy Working Group, Energy Stakeholders
Wednesday, January 25, 2023
END_OF_DOCUMENT_TOKEN_TO_BE_REPLACED