How LIHTC Caps Have Grown Since 1987

As noted here earlier this month, the Internal Revenue Service (IRS) released population figures for 2016. Those figures are an important component of how a state’s amount of available low-income housing tax credits (LIHTCs) is calculated. Other key factors are the per capita amount and small state minimums set each year, also by the IRS.

The per capita amount was set in 1987 at $1.25 and remained at that level until 2000, when the per capita amount was raised to $1.75, phased in over the following two years. In 2000, an annual cost of living adjustment (COLA) was established. Since that time, the per capita credit has grown in fits and starts, generally at about $0.05 per year based on the COLA adjustment. If those were the only variables that went into the LIHTC program though, it would be pretty easy to forecast the total amounts of LIHTCs in a given year. But, along with the per capita increase in 2000, a small state minimum was introduced for states with populations alone didn’t allow them robust LIHTC investments. That small state minimum began at $2 million and, because of annual COLA increases has grown to $2.69 million for 2016.

In addition to the per capita amount and the small state minimum, Congress has taken more targeted steps to increase the amount of LIHTCs the federal government allocates to states in certain circumstances. The first of those was in 2006, when GO Zone legislationadded $18 per capita for residents of states hardest hit by Hurricane Katrina. That credit increase continued through 2008, adding more than $100 million per year over those three years.

While GO Zone LIHTCs would expire in 2008, three other targeted per capita increases were expanding the available allocation of LIHTCs: 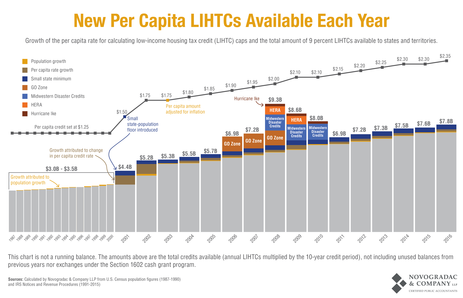 While the growth in new LIHTCs each year is fairly stable, based largely on state population growth and COLA changes in the per capita amount, certain one-time increases provided additional LIHTCs in times of economic trouble or natural disasters. We look forward in the coming months to sharing with you the results of our examination of units built with these additional credits provided to certain states and regions – specifically, what impact did the additional per capita spending have on LIHTC development, and what does that tell us about future per capita increases, perhaps nationwide?

May 4, 2021: What CDEs and Qualified Businesses Should Be Doing Now to Prepare for the Next NMTC Application Round
Posted on May 4, 2021
April 27, 2021: Maximizing the Benefit of State and Local Tax Incentives and Exclusions for Renewable Energy Properties
Posted on April 27, 2021
April 20: 2021: Understanding Provisions of the Affordable Housing Credit Improvement Act of 2021
Posted on April 20, 2021
END_OF_DOCUMENT_TOKEN_TO_BE_REPLACED