The prospect of comprehensive tax reform poses a number of questions for the historic preservation community, including how a reduction in corporate tax rates would affect the value of historic tax credits (HTCs).

The House tax reform blueprint proposes a corporate tax rate of 20 percent, but also provides full expensing of assets (excluding land) and limits the deductibility of interest expense.  Novogradac’s analysis found that as a rule–under both current law and the House Republican blueprint–the HTC provides significant financial assistance to help offset the cost of historic rehabilitations, but generally doesn’t cover the entire cost.  Interestingly, this analysis found that while the House blueprint provides a significant benefit, the benefit is slightly less than under current law. 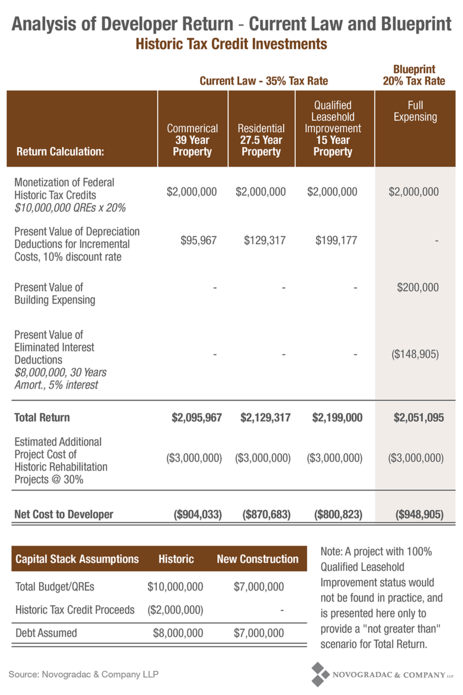 In all cases, part of the additional sources for a historic rehabilitation project (compared to the sources for a non-historic project) is the value of the HTCs.  This analysis assumes the same investor equity contribution rate of $1 per tax credit ($2 million total equity) for both current law and blueprint scenarios.

Under the House GOP blueprint, asset recovery would switch from depreciation over the asset’s life to full expensing. Novogradac & Company evaluated the potential effects of the House blueprint’s proposal to allow developers to expense 100 percent of development costs.  This analysis calculated the value of the deduction using the 20 percent blueprint tax rate and $1 million of incremental basis, net of the basis adjustment, of a historic rehabilitation, resulting in an incremental benefit of $200,000.

The House blueprint also proposes eliminating the deductibility of interest payments, so Novogradac considered the incremental cost of lost interest deductions for these investments compared to current tax law.  The analysis shows–assuming a 30-year loan, 5 percent interest rate and $1 million in incremental borrowing – eliminating the deductibility of interest payments would result in $148,905 additional cost to the HTC building owner.

The calculations show that under the House blueprint proposals, the HTC provides significant financial assistance to help offset the cost of historic rehabilitations, but generally doesn’t cover the entire costs.  However, the separate analysis of the effect of lower corporate tax rates on tax credit equity suggests that some additional HTC equity may be generated in some HTC financing structures.

These calculations generally confirm the ongoing need in a post-tax -reform world for the HTC to assist in leveling the playing field for HTC developments and non-historic developments.

ESG Investing: Where it is Now; Where it’s Headed; What to Do
Historic Tax Credit Direct and Lease Pass-Through Transaction Structures
Transactional Structural Challenges Faced While Pairing HTCs and OZ Incentive
END_OF_DOCUMENT_TOKEN_TO_BE_REPLACED