In the affordable housing community, the concept of opportunity areas has drawn increasing interest and consideration, particularly in recent research. For housing advocates, understanding what constitutes a high opportunity area and how living there can benefit low-income residents will inform decisions on where to locate affordable rental housing so that the best possible outcomes are realized by residents.

As part of its underserved markets research series, Freddie Mac has released eight reports highlighting what we know about hard to serve markets, the opportunities and obstacles they face, and how their affordable rental housing needs can be addressed.  As housing government sponsored entities (GSEs), Freddie Mac and Fannie Mae are mandated by duty to serve (DTS) provisions implemented by the Housing and Economic Recovery Act (HERA) of 2008, to support three major areas: rural housing; manufactured housing; and, affordable housing preservation.  The research presented in the series specifically looked at rural and Indian areas, manufactured housing, green initiatives and single family rentals. Two of the series’ reports, “Affordable Housing in High Opportunity Areas” and “Opportunity Incentives in LIHTC Qualified Allocation Plans,” describe what are known as high opportunity areas, the amount of affordable rental housing located there and how the low-income housing tax credit (LIHTC) program can be used to ensure lower-income households have the ability to live in these areas. As evidenced by research conducted by Opportunity Insights, where a child lives was found to have a “significant causal effects on her prospects for upward mobility.”

What is an Area of Opportunity?

What are the Characteristics of High Opportunity Areas?

With an idea of what is meant by an area of opportunity, the question becomes how to ensure low- and moderate-income households have the ability to reside there. Freddie Mac and NHT examined the QAPs of the 50 states and the District of Columbia to ascertain whether HFAs are using these plans to ensure the LIHTC is used to create affordable rental housing in areas of opportunities. Though HFAs had varying definitions of what it meant to be an area of opportunity, the five indicators mentioned above (access to education; economic growth/jobs; high income levels and/or low poverty rates; access to health care; and access to transportation) were the common characteristics the researchers found when examining the QAPs. These indicators are defined as follows: 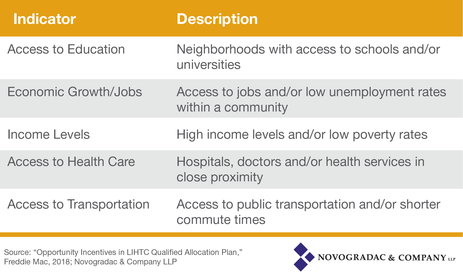 It should be noted that while no one indicator was found in all 51 QAPs, some indicators were found in the majority of plans, such as access to education, which was found in 39 plans, making it the most common indicator. The table below summarizes the QAP review. 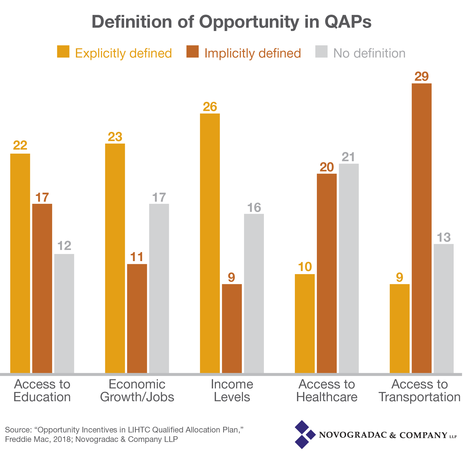 How Were QAPs Used to Promote Development?

Just as there are varying definitions as to what qualifies as an area of opportunity, so too is there variety in the ways in which states incentivize developers.  Directions provided by states may be explicit, where the QAP directly references and defines opportunity, or implicit in which case incentives do not directly mention opportunity or require housing be built in certain areas.  For instance, the Illinois Housing Development Authority (IHDA) defines opportunity areas as having low poverty and high access to jobs—explicit factors—among other things. Locating a LIHTC development within these areas is a scoring factor in the 2018-2019 QAP. On the other hand, Alabama’s QAP does not include any explicit references to opportunity but does provide points for locating a LIHTC development in proximity to services such as grocery stores, hospitals, banks and the like, thus an implicit reference to opportunity (Alabama’s plan was marked as implicitly defining opportunity by income levels and access to health care). The table above details the ways in which the various characteristics were cited in the QAPs. Of the 51 QAPs studied, North Dakota was the only state that neither explicitly nor implicitly identified opportunity areas in its QAP.

In addition to detailing what an opportunity area is, a number of states make it easier for developers to know where to locate their developments to receive tax credits by providing some degree of mapping of areas of opportunity.  In the competitive 9 percent LIHTC equity market, arming developers with as much knowledge about what the state expects in terms of development siting provides them with a better chance of being awarded tax credits all the while ensuring households in need of affordable homes are better served by housing built in areas of opportunity. In all, 59 percent of the QAPs were found to have some type of opportunity mapping feature, which includes 31 percent of states that currently map opportunity across the state.

Creating and maintaining affordable rental housing in areas of opportunity can be challenging. QAPs can be used to aid and direct the creation of affordable housing but there are numerous impediments to be overcome. As identified in the report, obstacles include: zoning issues; local preference for affordable housing; how to measure opportunity in rural versus urban areas; high land, acquisition, development and construction costs; and the lack of buildable land. Local preferences refers whether localities have a say in the approval process.  Lack of approval can mean an affordable housing development may be cancelled or delayed.  Rural areas present a special issue as incomes may be lower there and population less concentrated, making it difficult to come to an agreement on what “opportunity” means there. In addition to dealing with these challenges, it will take time to determine if incentivizing development in areas of opportunity actually has the desired effect—improving prospects for lower-income households by locating them in areas of opportunity—as one is looking at least several years from credit allocation to property development to full occupancy.

In addition to promoting newly constructed affordable rental housing, policymakers should also ensure that the long-term preservation of existing affordable rental homes located in areas of opportunity is a priority reflected in QAPs. Research shows that these homes are at higher risk of being lost from the affordable housing stock than other existing affordable rental housing. One way of ensuring the long-term affordability of these existing affordable homes and supporting the use of QAPs to direct investment to areas of opportunity would be to enact the Affordable Housing Credit Improvement Act (AHCIA). Introduced in 2017 by Sens. Maria Cantwell, D-Wash., Orrin Hatch, R-Utah, and Reps. Carlos Curbelo, R-Fla., and Richard Neal, D-Mass, and expected to be reintroduced early this year, specific measures that would aid in the preservation of affordable homes included: increasing the population cap for difficult development areas; making permanent a minimum 4 percent LIHTC rate; allowing states to award a basis boost to housing bond-financed developments; modifying the 10 year rule; and the inclusion of relocation expenses in rehabilitation expenditures; . There are also the measures of the bill that would strengthen and expand the LIHTC such as a 50 percent increase in allocation authority, enabling states to access more LIHTC authority for developments in high opportunity areas.

In terms of currently available resources, the importance of the GSEs in the affordable rental housing landscape, particularly in the current political climate, can also not be stressed enough. Freddie Mac recently announced that it has set a new record in multifamily loan purchase and guarantee volume in 2018 of $77.5 billion. Freddie Mac also invested $500 million in LIHTC equity last year. It should be noted that this was Freddie Mac’s first investment in LIHTC since 2008. To date, Freddie Mac has financed more than 860,000 rental homes.  Fannie Mae was also active in 2018, announcing several new LIHTC funds: in the fall of 2018 it pledged to invest as much as $145 million with Cinnaire, Ohio Capital Corporation for Housing and Midwest Housing Equity Group; in June 2018 a $26 million investment with The Richman Group was announced; and, in February 2018 an $100 million commitment was made to a fund with Raymond James. Enacting new measures, in addition to supporting currently available means of providing and preserving affordable rental housing would go a long way to improving the life outcomes of low-and moderate-income households.

Though more research will be needed on the effects of living in high opportunity areas, by incentivizing developers to build there, states are hoping to improve the economic mobility of very low- and low-income households. Because QAPs are generally updated each year, they provide the perfect vehicle for addressing states’ changing demographics and affordable housing needs. As evidenced by past research, QAPs can be a powerful tool states can wield as the country faces a severe shortage of affordable housing, particularly in those areas where better services and opportunities can make a difference to households that would benefit most.

May 11, 2021: State of HTC Market, Including Equity Pricing, Regulation and Legislation
Posted on May 11, 2021
May 4, 2021: What CDEs and Qualified Businesses Should Be Doing Now to Prepare for the Next NMTC Application Round
Posted on May 4, 2021
April 27, 2021: Maximizing the Benefit of State and Local Tax Incentives and Exclusions for Renewable Energy Properties
Posted on April 27, 2021
END_OF_DOCUMENT_TOKEN_TO_BE_REPLACED