In 2015, 13 states didn’t allocate any private activity tax-exempt bond (PAB) cap to affordable rental housing, according to the Council of Development Finance Agencies (CDFA). Meanwhile, also in 2015 $65 billion in available PAB cap went unused, $54.5 billion of which was carried forward to 2016. And from about 30 states according to the CDFA, an aggregate $10.5 billion could not be carried forward and was abandoned last year. A rough estimate indicates this lost resource just in one year could have made possible 80,000 more affordable apartments. At a time when affordable housing needs throughout the United States are so great, now is the time to review how to unleash this bond cap so more affordable rental housing can be built. 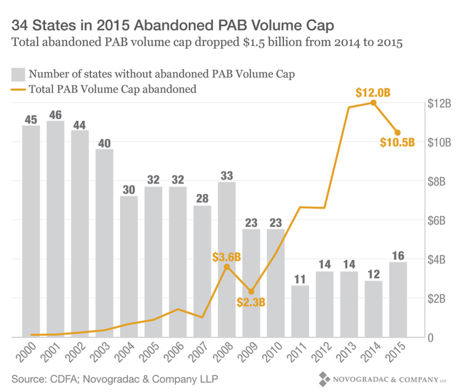 Like the broader category of municipal bonds, interest income from PABs is generally exempt from federal and often state income tax. Historically, this income tax exclusion allowed housing bond issuing agencies to sell bonds to investors at lower interest rates, which in turn led to housing bond-financed mortgages, both single family and multifamily, to be at a lower rate than comparable market-rate mortgages. However in recent years this has become less common, because of the low interest rate environment, the fallout from the mortgage crisis, and a variety of other factors.

For 2016, states are allocated the greater of $100 per capita or $302 million for multiple PAB-eligible purposes (known as the PAB volume cap). State bond agencies issue bonds themselves or allocate PAB cap to other bond issuing agencies. Bond issuing agencies have up to three years to use PAB cap before the cap authority expires. Eligible uses include transportation infrastructure, industrial development activities, student loans, and housing.

The good news for those in need of affordable housing is that in 2015 $6.6 billion of bond cap was used for the production and renovation of affordable rental housing.

With interest rates at all-time lows, existing property cash flow can generally support more PAB debt financing. Similarly, the amount of equity investment per dollar of tax credit, or equity pricing, is higher than before the 2008-2009 recession. As such, investment equity generated from tax credits is at all-time highs. The combination of higher supportable bond debt and tax credit equity means less financing is needed from other sources and PAB deals are more feasible now than in recent memory.

This greater feasibility of PAB financed rental housing comes at a time when, by any measure, there is a tremendous need both for new affordable rental housing and rehabilitation of the existing stock. More than 11 million households pay more than half of their income toward rent, and there are only 31 affordable apartments for every 100 extremely low-income households. Many of the 1.5 million federally assisted, privately owned apartments are decades old and in need of repair, yet also are at risk of no longer being affordable. The 1.1 million units public housing also are aging and have tens of millions of dollars of unmet need for repairs.

The first step in unleashing PABs for affordable rental housing is simply for states to allocate more of their PABs to rental housing. The second step is to ensure no PAB authority is allowed to expire and to increase utilization so less bond cap is carried forward. The third step is to get more residential rental housing built per dollar of PAB bond cap.

In 2015 a total of 15 states reported not losing any PAB volume cap. At a minimum, these states should allocate more PABs for rental housing. Responding to the affordability crisis is the highest and best among the eligible uses. While the other purposes have merit, creating and rehabilitating apartments meets an essential need for low-income households. Second, rental housing is the only PAB activity which produces substantial additional federal resources, and as such, each dollar of PAB cap allocated to rental housing provides the most federal tax subsidy of all PAB-eligible activities. The 4 percent LIHTC is a unique benefit forgone by allocating PABs to any of the other activities. The value of the tax credit can double to quintuple the present value benefit of the precious PAB resource.

At a minimum, recycled bonds should be used for other uses, so every state harvests the benefits of the tax credits for affordable rental housing in their state.

The second step in unleashing PABs for affordable rental housing is to ensure no PAB authority is allowed to expire and increase utilization so less bond cap is carried forward. The policies below could help increase the utilization of PABs. Some are within state housing agencies’ control; the rest depend on other state decision-makers.

These are among what are many proposals to increase utilization.

Allocating agencies should seek to generate more rental housing from existing resources.  One way to do that sounds like an oxymoron: Limit the PAB bond award. Why would this work? To be eligible for the maximum amount of LIHTCs, a development needs to use PABs to finance at least half of its land and building costs. As such, if PAB bond volume is limited to 52 percent to 55 percent of these costs, then more bond cap will be available for other developments. Any additional amount of needed debt financing could be covered by taxable debt issued at the same time, known as a taxable tail.

Using the 4 percent LIHTC to finance the construction and preservation of existing affordable housing stock is a proven, effective way to use PAB allocations. While the housing affordability crisis among the most pressing public policy challenges we face, LIHTC funding is a proven way to not only increase the affordable housing stock, but to bring supplemental resources into play, providing even more benefit.

For more information, Novogradac offers a webinar and handbook on PABs. Also, our professionals are available to help.