Overall 2017 was a very robust year for income limits; more than 80 percent of areas (88 percent of the population) saw an increase in the 50 percent very low-income (VLI) limit used for Section 8 rental assistance and multifamily tax subsidy projects (MTSP) when compared to the 2016 VLI income limits. 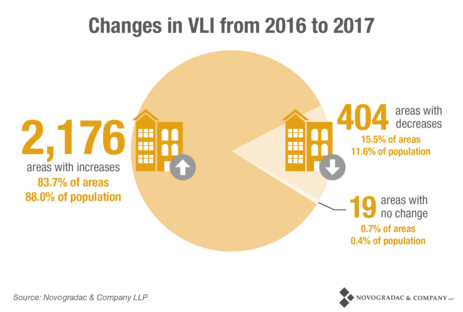 For many existing LIHTC properties, income limits will not increase once the hold harmless rule are factored in. Income and rent limits for low-income housing tax credit (LIHTC) properties are not allowed to decrease from year to year; this is referred to as the hold harmless policy. Generally speaking, the hold harmless period is determined for each property based on when it was placed in service. Therefore even though the income limit may have increased from 2016 to 2017, properties that are being held harmless may not see an increase in their income and rent limits if their hold harmless limit is greater than the 2017 limit. The following chart illustrates this concept–even though 2017 is greater than 2016, the income limit has not risen above its high-water mark of 2015 and therefore properties in service in 2015 or earlier would not have an increase in their limits.

Once the hold harmless and Housing and Economic Recovery Act (HERA) Special policies have been accounted for, almost half of the areas will not have an increase in their maximum income limit due to being held harmless at a higher income limit from prior years. Because this calculation is based on when a project is placed in service this analysis have assumed a placed- in-service date of Jan. 1, 2009, or earlier and compared the highest income limit for that county since 2009 vs the 2017 income limit: 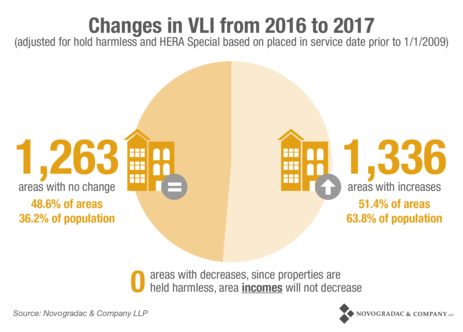 Even though income growth is increasing for many communities, income limits will still be flat for a vast majority of the LIHTC properties in the country.  Below is a comparison of when each area achieved its highest income limit: 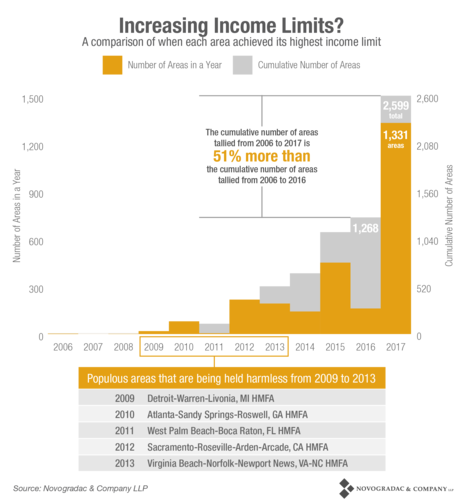 As can be seen from the graphic above, 20 percent of all areas have not had an increase in their income limits since 2013.

As was predicted in previous posts in this space, the national median income increased by 3.5 percent, so the cap on increases in LIHTC rent and income limits will be 7 percent.  Also, remember that since HERA Special does not have a cap on increases, there will be some areas that increase by more than 7 percent due to the HERA Special calculation.  According to HUD, 209 areas (11 percent of all areas) were capped at a 7 percent increase.  Conversely, decreases are still capped at 5 percent.  Eighty-nine areas had their decreases floored at 5 percent (3.4 percent of all areas).

As mentioned above, income limits trended up in 2017. See below for an analysis of the average change in income limits, including weighted averages based on population, households and renters. 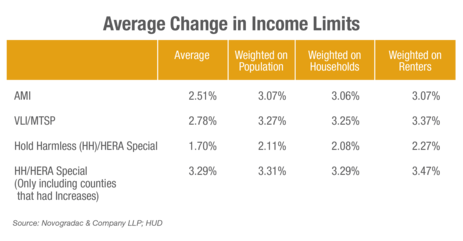 Because in all cases the weighted average is greater than the average, it appears that income limits generally had larger increases in the more populous areas of the country. Below is a chart of the changes in the 15 largest fair market rent (FMR) metropolitan areas. (Click here for a sortable excel sheet of all 2017 income limit changes.)

Please click here to see a table of the income limit changes in the 15 largest Fair Market Rent Metropolitan areas.

May 4, 2021: What CDEs and Qualified Businesses Should Be Doing Now to Prepare for the Next NMTC Application Round
Posted on May 4, 2021
April 27, 2021: Maximizing the Benefit of State and Local Tax Incentives and Exclusions for Renewable Energy Properties
Posted on April 27, 2021
April 20: 2021: Understanding Provisions of the Affordable Housing Credit Improvement Act of 2021
Posted on April 20, 2021
END_OF_DOCUMENT_TOKEN_TO_BE_REPLACED