More households are spending a greater percentage of their income on housing than they had previously, according to a U.S. Department of Housing and Urban Development (HUD) report.

HUD’s biennial Worst Case Housing Needs 2021 Report–released to Congress in July and to the public Sept. 30–found that 7.77 million renter households experienced worst case needs in 2019, slightly increased from 7.72 million in 2017, leaving less of their income for other vital expenses such as food and healthcare.

The report uses data from the 2019 American Housing Survey, which is sponsored by HUD and carried out by the U.S. Census Bureau every two years. The housing issues highlighted in the report are not new, and households have been facing affordability issues long before the onset of the COVID-19 pandemic. Though the data presented is from 2019, when the United States had a relatively strong economy, this data shows that low unemployment rates did not improve affordable housing issues.

Households who experience worst case housing needs are renters with very low incomes, which are households at or below 50% of area median income that do not receive any housing assistance from the government and spend more than 50% of their income on their rent and/or households who live in inadequate housing conditions. People experiencing homelessness and households receiving government housing assistance are not counted as having worst case needs for the purposes of this report. 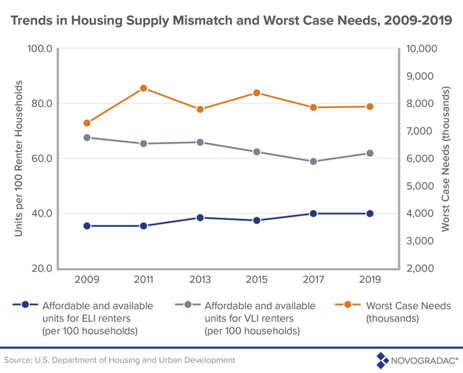 The report did not find a statistically significant change from 2017 to 2019 because the increase in number of households with worst case needs was due to the creation of more households because of a rising population. Out of the 7.77 million households, 2.27 million had children, 2.24 million were led by an older adult (an adult who is 62 years old or older), and 2.54 million were single adults. Thirteen percent of the total households had someone who was younger than 62 years old and had a disability. More households with older adults saw an increase of having worst case needs, but that is mostly due to the United States having an increasingly older population.

The 2021 report included a special addendum to account for the anticipated effects of the COVID-19 pandemic on worst case housing needs. While the report to Congress provided 2019 data, households experiencing worst case needs have been adversely affected by COVID-19. Though this special addendum only covers February 2020 through March 2021, the initial effects of the pandemic are evident. The next report, which will come out in 2023 using 2021 data, will be able to better illustrate the effects of the pandemic on worst case housing needs.

Two major topics were the pandemic’s effect on homeownership and unemployment. At the beginning of 2021, sales of homes and home prices were higher compared to the beginning of 2020 due to increased social distancing regulations and low mortgage rates during the pandemic, driving increased demand. During the height of the shutdowns in April 2020, the unemployment rate was 14.3% and many jobs, such as retail and manufacturing, could not convert to telework. The unemployment rate decreased to 6.3% at the beginning of 2021 due to fewer social distancing requirements as compared to April 2020, but 4 million people had also left the labor force during the pandemic, which contributed to lower unemployment. The loss of employment created uncertainties for many renter households, as many struggled to pay their rent and utilities. The high unemployment rate also affected landlords who lost rental income because many could no longer afford to make necessary renovations to their units or could not pay their mortgages.

Congress has passed multiple pieces of legislation during the pandemic to mitigate the effects of COVID-19. The CARES Act (H.R. 748), passed in March 2020, provided immediate relief to millions of people through stimulus checks of up to $1,200 for adults and $500 for dependent children and additional unemployment checks of $600 per week up to four months for states to allocate. It also provided $12.4 billion in funding to HUD programs. The Consolidated Appropriations Act of 2021 (H.R. 133) provided further pandemic relief, including $25 billion in emergency rental assistance and $600 stimulus checks for income-qualified taxpayers and qualifying children. The most recent pandemic relief legislation was the American Rescue Plan Act (H.R. 1319) which also provided an addition $21 billion in emergency rental assistance and $1,400 stimulus checks for qualifying individuals. This act also expanded the Child Tax Credit from $2,000 to $3,000 per child over the age of six and from $2,000 to $3,600 per child under the age of six for 2021. The money low-income families are receiving from this expanded Child Tax Credit have helped them pay their rent. Regulatory pandemic relief also included eviction moratoria which prevented landlords from evicting tenants for nonpayment of rent or other charges.

In August 2020, 6.5 million renter households were behind on their rent and that number increased to 7.8 million in January 2021. The report found that, overall, renters in single-family homes were more likely to be behind on rent compared to multifamily buildings, but it is not yet clear why this is and HUD will need more data to answer this question. However, the report did find that many who received stimulus payments used it for their rent and utilities and that worst-case needs would have increased further without these payments.

This addendum presents a preliminary view of the impacts of COVID-19 on worst case housing needs, but HUD will need more data to fully understand the pandemic’s impacts.

On Oct. 18, the Bipartisan Policy Center held a webinar to discuss the report’s findings and what they mean for affordable housing policy going forward. The webinar panelists included: Dennis C. Shea, executive director of the J. Ronald Terwilliger Center for Housing Policy at the Bipartisan Policy Center; Chris Herbert, managing director at the Harvard Joint Center for Housing Studies; Robin Hughes, president and CEO at Adobe Communities; and, Ann Oliva, vice president for Housing Policy at the Center on Budget and Policy Priorities. They discussed why this data is important to their research and advocacy and how they found it helpful in understanding the current housing affordability challenges on both supply and demand. The data shows how many households are not receiving federal housing assistance, such as Housing Choice Vouchers and emergency rental assistance, even though many are eligible. The conversation covered how the data also shows that the many factors that contribute to worst case needs are connected and that federal, state and local governments, along with advocates, need to work together to solve these challenges. The market is not producing enough affordable housing on its own, so the government needs to intervene.

One of the common themes discussed was that the high number of households with worst case needs shows the need for a more permanent solution, such as universal vouchers. Support for the Build Back Better Act (BBBA) was voiced, particularly the importance of retaining all the housing provisions included in the $3.5 trillion plan that came out of the House, which would address the shortage of affordable units and to work toward a permanent solution to the country’s housing issues. These provisions need to include increased rental assistance, investments in the National Housing Trust Fund, and an equitable system of dispersing these resources. They believe that it is imperative that federal dollars be provided to states so the states can address their own housing challenges and that any proposed solution needs to be equitable, otherwise it will not fully address worst case needs.

The panelists also mentioned that many initiatives in the BBBA’s housing agenda that will improve worst case needs have bipartisan support. They used the example of the low-income housing tax credit (LIHTC) and that expanding the LIHTC will increase the supply of affordable units. The Neighborhood Homes Improvement Act (H.R. 2143, S. 98) was also discussed as it would incentivize private investment to increase homeownership among low-income households who normally would not be able to afford a home.

Recommendations coming out of the webinar included increased reporting for the next report, to include information about households on housing assistance. While HUD does not count these individuals as having worst case needs for the purpose of this report, many of these households experience worst case needs if they live in poor-quality housing or live in a low-opportunity area. Further, the next report should discuss how climate change is affecting worst case housing needs and how it is expected to continue to do so.

While the report only mentioned the pandemic in its addendum, the panelists expressed that the pandemic has made worst case housing needs worse, mostly due to rising rent costs and because small landlords are deferring maintenance/selling their properties due to lack of rent payments.