When the 2017 low-income housing tax credit (LIHTC) tenant data report was released March 2020, the country was bracing itself for the unknown of the COVID-19 pandemic. The release of the 2018 LIHTC tenant data in April 2021 comes amid the backdrop of more than a year of the global pandemic, which has exacerbated the preexisting affordable housing crisis. Even worse, the most vulnerable populations that LIHTC serves across a diversity of income demographics have also been disproportionately impacted by COVID-19.

While it’s necessary to note that the 2018 LIHTC tenant data predates the onset of the pandemic, it’s more important than ever before to remind policymakers and the affordable housing community to fight against the perception that LIHTC only serves households earning between 50% and 60% of area median income (AMI). HUD’s LIHTC tenant data supports the reality that the LIHTC serves the most vulnerable households who need it. While many of the lowest income households also may depend on rental assistance to make the restricted rent of LIHTC properties even more affordable, it’s crucial that the LIHTC property exists to enable those lucky enough to have a voucher find somewhere to use it. The LIHTC and rental assistance are complementary housing policy tools, not substitutes for one another.

Under the Housing Economic and Recovery Act (HERA) of 2008, all state agencies are required to submit demographic and economic data on LIHTC tenants to the U.S. Department of Housing and Urban Development (HUD). The April 2021 release of  LIHTC tenant level data (the initial March release was revised to account for errors in data collection) is the sixth data release, and covers resident data of LIHTC properties placed in service (PIS) through Dec. 31, 2018. From May to August of each year, HUD updates the LIHTC placed in service database, by sending a survey to each state housing finance agency. Data from those state finance agencies is collected and a report is published the following year.

It should be noted that while the average income test (AIT) was enacted in 2018, very few, if any at all, properties that were placed in service in 2018 elected to use it, and therefore AIT did not substantively change the 2018 income data. Future HUD LIHTC tenant reports are likely to show more of an effect of the AIT option on tenant income data.  In 2020, the IRS proposed regulations implementing the AIT option. Depending on how those regulations are finalized, many more developers may elect to use the AIT option.

LIHTC tenant data was provided for nearly 2.3 million LIHTC homes in the 2018 report. Between 2017 and 2018, an additional 87,380 LIHTC homes were included in the HERA-mandated tenant data. The 2018 data highlights the similar trends that both 2017 and 2018 LIHTC residents follow in race, income, rental assistance received and disability status.

In 2018, the clear majority of LIHTC residents (71.5%) earn 40% of AMI or less–this majority illustrates that LIHTC homes are now more than ever continuing to serve the population it was created to serve. See the graphic below for the full breakdown of LIHTC residents by income.

The share of Black and White tenants in LIHTC homes has changed since 2015. In 2018, 38.4 % of LIHTC tenants were white (up from 2017’s 28.8%), and 27.5% were black (lower than 2017’s 30.8%). While these percentage changes may seem significant, the distribution in race remains about the same–the black and white populations make up the majority of LIHTC residents, with Hispanic tenants comprising the third largest category. Further, the 2018 data underestimates the extent that COVID-19 has impacted families of color, as the data predates COVID-19. The large numerical changes in demographics may be due to the substantial increase in the reporting of this data in 2018. In 2018, 14.7% of LIHTC properties did not report race and ethnicity, which is drastically lower than the nonresponse rate of 41.4% in 2015.  See the graphic below for a full breakdown of LIHTC residents in 2018 by race.

According to the report, the number of LIHTC residents with disabilities has increased from 2017 to 2018. In 2018, 91.6 % of LIHTC households provided disability information and 11.3 % of households had at least one member reported as disabled. The reporting percentage is higher than the numbers reported for 2017, when 83.5% of households reported disability information and 12.1% had at least one member reported as disabled. These numbers likely understate reality, as tenants are not required to respond to the question on disability status. See the table below to compare the disability status numbers throughout the years. 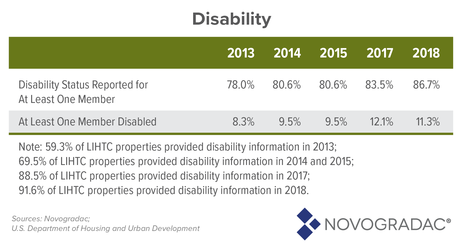 HUD’s LIHTC tenant is an important resource because it confirms that the LIHTC assists those it intends to serve, including the lowest income households. Since 2015, reporting has increased, and the small changes in demographics shows that the LIHTC is consistent each year at serving vulnerable populations–such as low-income households and those with disabilities. Data collection reports such as these are important, as they can and should be used to advocate for policies that will fortify and expand the LIHTC. LIHTC advocates will continue to push for policies such as a basis boost for extremely low-income households, which will facilitate even more deep income targeting as well as other provisions of the Affordable Housing Credit Improvement Act (AHCIA), which was reintroduced April 15.

Affordable housing advocates scored a major victory in December 2020 when the minimum 4% LIHTC rate was passed as part of year-end tax legislation. The enactment of the 4% floor will help tax exempt private activity bond- (PAB-) financed properties serve lower income households. The LIHTC is well positioned now and in the future to debunk the perception that it only serves families and households earning 50-60% AMIs – amid the effects felt of COVID-19, this debunking is timely. The reality is that LIHTC does indeed serve the most vulnerable families. The 4% floor and passage of the basis boost for extremely low-income household with other provisions of the AHCIA will ensure the LIHTC continues to provide affordable rental housing for low-income households, and will strengthen the LIHTC to serve even more of the lowest income households among hard to reach populations and communities.