Through October 2015, 185 Rental Assistance Demonstration (RAD) projects completed the funding process representing $2.5 billion in financing to convert 19,255 units from public housing to Section 8 contracts. As only $250 million in financing is from public housing funds, the leverage ratio of RAD projects is nearly 9:1. Most of those developments (63 percent) are being rehabilitated and others are being demolished and rebuilt, according to a recently issued interim report evaluating the U.S. Department of Housing and Urban Development’s (HUD’s) RAD program.  Another approximately 165,000 units are in the pipeline for RAD conversions.

Construction financing for RAD conversion properties came from a variety of sources, according to HUD’s interim report; the largest portion ($977 million) came from low-income housing tax credit (LIHTC) investors; $503 million from 4% LIHTC transactions and $474 million from 9% transactions.. In order, the next largest sources of RAD financing were:

It does not appear that the number of properties or units being converted through RAD has an effect on per-unit financing costs. While not an explicit goal of the RAD program, reducing costs in rehabilitating units undergoing the conversion process is laudable. Through October 2015, 12 states had 10 or more properties that had completed conversion; those states had an average amount of financing per unit of $73,626 to improve and replace public housing units, about $1,600 less than the average of those states with fewer than 10 properties undergoing conversion ($75,189). This indicates that the financing required does not appear to depend on the number of properties or units being converted. 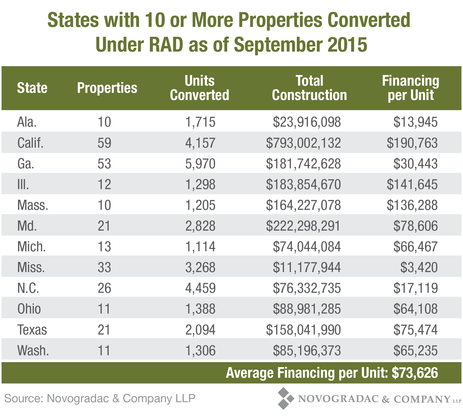 Unsurprisingly, the states requiring the most financing per unit are those with larger populations, more demand for housing and generally higher construction costs: Massachusetts, Illinois and California all required higher levels of financing than other states converting ten or more properties.

By contrast, 19 states had five or fewer properties having completed RAD conversion in October 2015; the financing per unit for those states was $76,911. This suggests that, at least for units converted in the years from the program’s inception through October 2015, the amount of financing per unit does not depend on the number of properties or units converted under RAD. 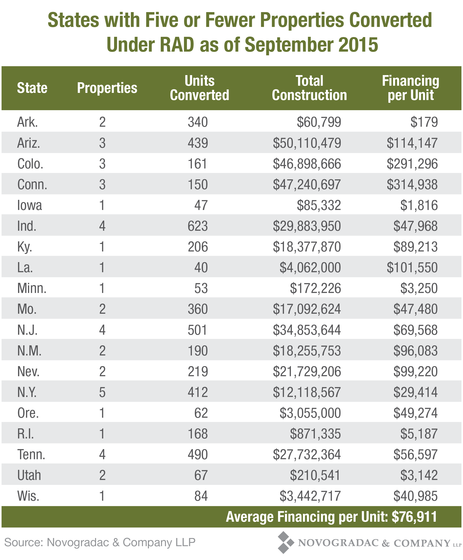 HUD’s next scheduled report, which is expected to examine the program’s second phase, is scheduled to be published in late 2018. In the meantime, RAD conversions continue–as of September 2016, more than 800 properties in 40 states with nearly 100,000 units are in the process of RAD conversion, and proposals for about 65,000 units are being evaluated by HUD.

Results from the first HUD report suggest that the cost of renovations using RAD is consistent across the range of inventory being financed, which is good news. The hope when RAD launched was that it would benefit all sizes of PHAs–and, ultimately, residents–without limitations to the number of units being upgraded. After the first HUD evaluation, that appears to be holding true.

In the long term, HUD would like to see the unit cap be taken out of the RAD program entirely, and this report is designed to help make the case to Congress to do so. However, in the near term, Congress is not likely to go along.  Instead, The FY 2017 omnibus appropriations bill is likely to include a provision increasing the RAD unit cap from 185,000 to 250,000 and providing $4 million to convert Section 202 Housing for the Elderly project rental assistance contracts (PRACs). Similarly, the LIHTC expansion legislation sponsored by Sens. Cantwell, D-Wash., and Hatch, R-Utah (S. 3237) contains several provisions, which if passed, could help facilitate RAD conversions in many ways.

May 4, 2021: What CDEs and Qualified Businesses Should Be Doing Now to Prepare for the Next NMTC Application Round
Posted on May 4, 2021
April 27, 2021: Maximizing the Benefit of State and Local Tax Incentives and Exclusions for Renewable Energy Properties
Posted on April 27, 2021
April 20: 2021: Understanding Provisions of the Affordable Housing Credit Improvement Act of 2021
Posted on April 20, 2021
END_OF_DOCUMENT_TOKEN_TO_BE_REPLACED