As more and more developers are exploring the average income minimum set-aside, one of the looming questions is how income limits should be calculated for units that are not using the 50 percent and 60 percent limit that are published by HUD for low-income housing tax credit (LIHTC) and tax-exempt bond developments.

Prior to the adoption of the average income minimum set aside, there were only three income limits applicable to LIHTC projects at the federal level: 60 percent, 50 percent and 40 percent (for the 40/60, 20/50 minimum set aside and deep rent skewed, respectively). Allocating agencies have historically had deeper restrictions but since those were state/allocating agency requirement; as long as the additional income limits were lower than the federal level, the agency had leeway on how it calculated its deeper targeted limits. 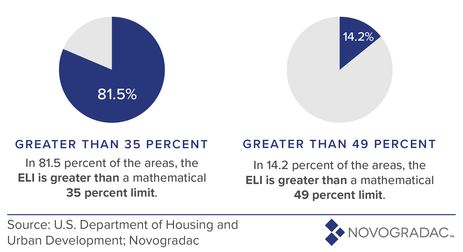 If ELI is used as the standard for the average income 30 percent units, it would mean that in 14.2 percent of the country a developer could identify a unit as a 30 percent unit for purposes of meeting the income average test and be able to qualify tenants and collect essentially the same rent as unit designated as a 50 percent unit. For example, take a 100-unit property in Talladega, Ala. comprised entirely of two-bedroom units. The development has 60 units at 80 percent and 40 units at 30 percent.

Using ELI would increase the monthly gross rent by 20 percent because the 30 percent units are allowed to charge a rent that is equal to 50 percent of median income. While some developers may welcome the extra cash flow, this seems to be incongruous with the intent of the average income minimum set aside.

For example, consider a 100-unit development in the Stamford-Norwalk, Conn. HMFA comprised entirely of two-bedroom units. The property has 60 units at 80 percent and 40 units at 30 percent.

Using LI results in a 19 percent reduction in the monthly gross rent for the project.

Unfortunately, developments utilizing the average income minimum set aside do not have clear guidance on what income limits to use. This can lead to uncertainty in setting income limits. Owners and managers should consult with their state agency, investor and tax professional before determining 30 percent and 80 percent income and rent limits for their property.

How OZs Can Support Affordable Housing Creation, Preservation
A Look at the LIHTC: Past Pricing Trends, the Current Market and Future Concerns
Is 2020 the Year to Pass Infrastructure Legislation that Includes Community Development Tax Incentives?
END_OF_DOCUMENT_TOKEN_TO_BE_REPLACED