Using the American Community Survey (ACS) and the Congressional Budget Office’s (CBO) CPI estimate Novogradac is able to estimate area median income and very low income for 2020 and 2021, and those estimates also provide some insight into overall income limit trends.

By contrast, in both 2020 and 2021 more than 30 percent of the areas for which Novogradac has estimates will have an increase of greater than 5 percent. The chart below shows the distribution of the estimated growth for 2020 and 2021. 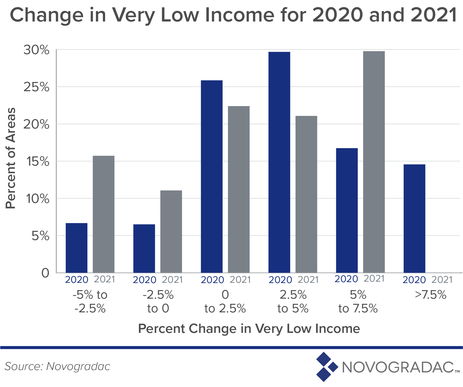 One thing to remember when estimating income limits is the impact that the CBO estimate of CPI has on the limits. The last few years, the CPI estimate has served as an accelerant to income limit grow. However, the CPI estimate from 2019-2021 results in flat multiplier. To examine the impact of this, assume that an area had an ACS median family estimate of $50,000 each year; in that case, the HUD published AMI for each year would have been as follows:

As this shows, even in an area with flat ACS data, in 2018 and 2019 the area had an increase in HUD AMI due to the CPI increases. However, because the CPI increase is basically flat from 2019-2021, the income limit also become flat. Consider how this would have impacted an area where the ACS increased by 2 percent a year.

In this example, in 2017 and 2017 the CPI worked as an accelerant to magnify the icreases. However, because the CPI is flat in 2020 and 2021 the income only grow at the underlying 2 percent in the ACS data.

What the slowdown of CPI means is that income limits will generally grow slower over the next two years. In addition, if CBO follows its normal release schedule, a new CPI estimate will be released in early 2020 that will impact the 2020 actual HUD limits. In addition, the CBO will release two additional CPI estimates prior to the HUD releasing the FY 2021 income limits. If the CBO has any major revisions to its CPI outlook, this could, (as always) have an impact on Novogradac’s estimates.

We can provide estimates for of AMI for most areas. However, there are some limitations on the data availability for 2021 estimates. First, the 5 year ACS data will not be released until December. The 5-year ACS data mainly affects smaller areas of the country that do not have a reliable one year estimate. The second limitation in data affects Novogradac’s ability to estimate the adjustments HUD applies to AMI to arrive at VLI (please see this blog post for more information on the adjustments). First, Novogradac has not found a reliable way to estimate state median income. In addition, we are waiting for the release of the 2021 fair market rents to estimate areas that have a high housing cost adjustment. Please see this website for information about order estimates and availability of areas.