About the National Pool

LIHTCs that are not allocated by states are added to a national pool and redistributed to qualified states that apply for the additional credits. Specifically, the unused housing credit carryover for a state for any year is the excess of the unused state housing credit ceiling for the previous year over the total housing credit dollar amount allocated for the current year.

Unused authority should not be confused for a general lack of demand. On the contrary, national demand for LIHTC remains robust. However, the allocation process sometimes results in small amounts of credits returned by affordable housing developments or otherwise remaining toward the end of the year that can’t be efficiently placed with new applications before the end of the year, despite tremendous demand for LIHTC in that state.

Rev. Proc. 2018-55 describes how the $2.69 million of unused LIHTCs in 2018 was distributed among the 32 qualified states and Puerto Rico. Amounts of reallocated LIHTC range from a low of $6,395 for Vermont to a high of $405,396 for California. The five states to receive the most unused LIHTC allocation from the national pool in 2018 are: 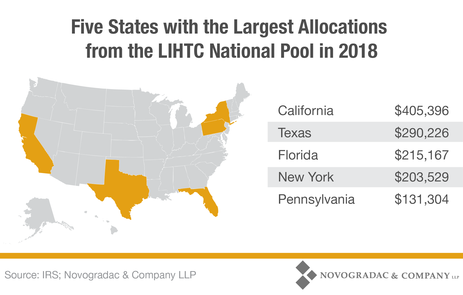 Four of the five states receiving the most unused LIHTC from the national pool in 2018 are the same as in 2017. Pennsylvania moved up one spot from last year to bump Illinois to the sixth position this year.

The relatively small size of the national pool compared to the amount of LIHTC authorized every year reveals that most states are consistently able to use all or most of their LIHTC allocations.

In light of ongoing tax reform efforts (and a 2014 proposal by former House Ways and Means Chairman Dave Camp to eliminate the national pool of unused LIHTC), it is important to emphasize that the national pool is a critical provision that rewards states with the greatest need, while giving an incentive to states to use their full allocation. Making the scarce LIHTC available to the states and territories that need it the most is a strong argument for retaining the national pool in the tax code.