IRS Announces 27 States to Share in $5.4 Million in Reallocated LIHTCs 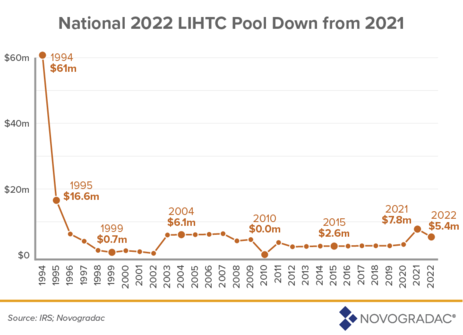 The carryover allocation is made up of LIHTCs that are not allocated by states but are added to a national pool and redistributed to qualified states that apply for the additional credits. To qualify for carryover allocation, a state must have allocated its entire LIHTC ceiling for the preceding calendar year. Carryover credits are often available because the allocation process sometimes results in LIHTC authority too small to be allocated to affordable housing developments.

While the total amount of pool allocation was higher than average, the number of states that received a carryover allocation was lower than average. In the past decade, the average number of states to receive allocation from the national pool is 32. The 27 states in 2022 to receive a carryover allocation is the fewest in any given year over the past 10 years. By comparison, 2021 had the second lowest number of carryover awardees at 29. Eight states (Arkansas, Idaho, Kentucky, Maryland, New Jersey, Oklahoma, Texas and Utah) that received credits in 2021 are not on the 2022 list and seven states (Illinois, Maine, Missouri, Montana, North Carolina, Ohio and Oregon) will receive pool credits in 2022 after not receiving them in 2021.

An important context for the carryover allocation: The national total of $5.4 million in carryover is less than 1% of the 2021 total allocation. More importantly: Unused authority should not be confused for a general lack of demand. National demand for LIHTCs remains robust.

To stay up to date on the latest LIHTC industry news, there is still time to register for the Novogradac 2022 Tax Credit Housing Finance Conference on Dec.1-2 in Las Vegas.