The shortage of affordable housing is well documented and there are many causes.

One cause commonly cited is the lack of construction of all homes, especially affordable ones. A recent article by the Harvard Joint Center for Housing Studies (JCHS) explores why supply hasn't kept up with demand. The article focuses on the relationship between housing permits issued and household formation, and the importance of keeping permit numbers higher than the number of households formed in order to ensure that housing needs of all households are met.

The recent production rate of homes is much slower than the historical norms. Starting in the mid-1970s, the housing construction industry has built on average 130 new units for every 100 households formed. This ratio has been used as the rule of thumb by the JCHS in determining the appropriate amount of construction required to ensure housing needs are met. This ratio is the rule of thumb to account for changes of population in markets, the natural amount of vacancy that is required for a healthy housing market and for the replacement of housing units that happens due to conversion or demolition. From 2010-2018, the actual ratio got smaller, as 8.35 million households were created during this time frame and only 8.35 million new housing units were built–including housing completions and placements of manufactured homes.

While a home was permitted for every household formed, the production level is not adequate based on the JCHS’ rule-of-thumb ratio. This low production level has put heavy pressure on housing markets across the country, but certain markets fare worse than others.

In the 19 markets where household growth exceeded new construction, nine of the 50 largest metro areas were included. The cities with the lowest household growth/permit issuances ratio include San Francisco (79 permits issued per 100 new households formed), Sacramento (88),  San Diego (94), Denver (97) and Phoenix (99).  See the bar chart below for an illustration of some Western and Southern market permit issuances against the 130 benchmark. 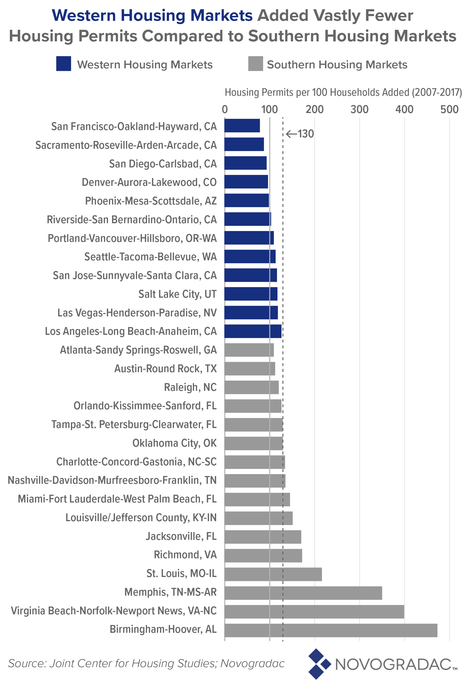 Vacancy Rates as a Reflection of Construction

The change in vacancy rates across cities can be an illustration of the level of difficulty the permit-obtaining process is in a particular  city. In markets that already had low vacancy rates, such as San Francisco, Boston and San Diego, supply was already constrained and became even tighter with new households. In 2007, the vacancy rate in those markets was between 7.4 and 7.8 percent, which sits below the top 50 average of 9.9 percent. By 2017, the vacancy rate of the San Francisco Metropolitan Statistical Area declined from 6.9 percent (2007) to 5 percent (2017), which exacerbated the problems caused by the shortage of available homes.

Markets that had flat vacancy rates (meaning little to no change in vacancy rates) were the markets in which household growth was met with a response of rapid new construction. New York is an example of a market where vacancy rates were low (6.5 in 2007) and remained low (6.9 in 2017), due to the response of numerous permits (182 permits for every 100 households). Other flat vacancy rate markets include St. Louis (where 217 permits per 100 households were added), Richmond (173), Jacksonville (171), Louisville (152), and Miami (146). The chart below highlights that the metros with little vacancy rate change often have the highest number of permits issued. 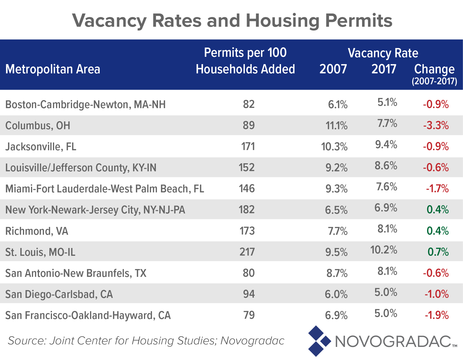 The implication that JCHS pulls from this research is that the ratio between household growth and housing permits issued is telling of how tight the housing supply is for that market. However, JCHS is quick to note that this simple ratio does not capture the full intricacies of housing market supply and demand. The 130-to-100 rule of thumb ratio will not apply to all markets, as vacancy rate, quality of stock and number of units in need of replacement vary by metro. Household permits do not necessarily equate to new supply because they exclude manufactured housing and not all units that are permitted are built. Lastly, household growth can be partially stifled by the inability of the market to deliver new housing supply, meaning it is not a perfect metric of housing demand.

However, this JCHS article reinforces research and editorials that have discussed the positive impacts easing permitting requirements would have on the construction of homes. Overly restrictive regulations have been found to stifle home construction. Relaxing some of these burdensome regulations would reduce the amount of development time for developers, which in turn would significantly lower costs, making it more feasible for developers to charge rents affordable to more households. Lowering development costs would also allow states to use the same amount of LIHTC allocation to produce more affordable rental homes.

The Affordable Housing Credit Improvement Act (AHCIA, H.R. 3077, S. 1703) has provisions that would encourage the removal of certain restrictive regulations that sometimes impede the development of LIHTC properties, such as the provision to prohibit local approval and contribution requirements.

The AHCIA also encourages more LIHTC development by increasing the available allocations. For example, one such provision would expand bond recycling, which would allow more bond cap to be devoted to multifamily production. Other provisions would increase per-capita and small state minimum allocation by 50 percent, and set a permanent minimum 4 percent rate for low-income housing tax credits used to finance the acquisition of property or generated by tax-exempt private activity bonds.  Enacting these provisions would increase affordable rental housing production and help address the imbalance of permits to households formed in many communities.