You have to go back to the early days of the low-income housing tax credit (LIHTC) to find a year when the amount of carryover LIHTCs allocated to states was larger than it is for calendar year 2021.

The Internal Revenue Service released Revenue Procedure 2021-44 Monday, allocating nearly $7.8 million in carryover LIHTC allocation to 29 states for calendar year 2021. That amount is the highest such allocation since 1995–the second round of LIHTC carryover allocation–and is roughly three times the average allocation amount for the past decade. The COVID-19 pandemic presumably played a major role in that increase, making this level of carryover unlikely to be duplicated anytime soon. 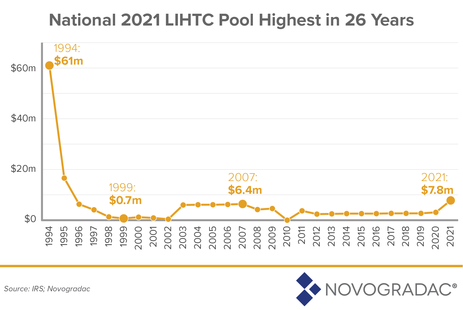 The carryover allocation is made up of LIHTCs that are not allocated by states but are added to a national pool and redistributed to qualified states that apply for the additional credits. Those credits are often available because the allocation process sometimes results in LIHTC authority too small to be allocated to affordable housing developments. The COVID-19 pandemic in 2020 likely also resulted in larger amounts of returned credits, some of which were not reallocated.

As noted above, the 2021 amount is the most such carryover since 1995, when $16.6 million was allocated. That was the second year in which carryover LIHTCs were allocated, following the 1994 total of $61 million.

After the first two years, the volume of carryover credits dropped significantly, generally amounting to about $5 million per year until plummeting to virtually zero in 2010 during the Great Recession. Over the past decade, the annual carryover amount has ranged between $2.4 million and $3.7 million–until 2020 ended with $7.8 million in carryover LIHTCs for calendar year 2021. 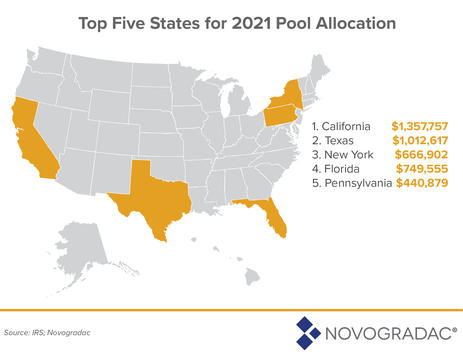 While the total amount of pool allocation was higher than normal, the number of states was fewer than normal, which makes sense because in order to qualify for carryover allocation a state must have allocated its entire LIHTC ceiling for the preceding calendar year. In the past 10 years, the average number of states to receive allocation from the national pool is 32. The 29 states in 2021 is the fewest since 2011, when 27 states and the District of Columbia received carryover credits. Seven states (Arizona, Illinois, Maine, Missouri, Montana, North Carolina, North Dakota) that received credits in 2020 are not on the 2021 list and three states (Arkansas, Indiana, Utah) will receive pool credits in 2021 after not receiving them in 2020.

An important context for the carryover allocation: The national total of $7.8 million in carryover is less than 1% of the 2020 total allocation. More importantly:  Unused authority should not be confused for a general lack of demand. National demand for LIHTC remains robust, but the pandemic in 2020 resulted in a unique year.