The low-income housing tax credit (LIHTC), continues to serve the nation’s most vulnerable households, according to “Understanding Whom the LIHTC Program Serves: Data on Tenants in LIHTC Units as of December 31, 2015,” a U.S. Department of Housing and Urban Development’s (HUD) report released March 20, 2018. The report provides insight into households in LIHTC rental homes including information about race, ethnicity, family composition, age, income, use of rental assistance, disability status, and monthly rental payments.

There are several caveats to consider about HUD’s data. First, not all data reported by housing finance agencies (HFA) are collected in a manner consistent with HUD’s demographic data collection standards. Second, what’s reported does not capture all LIHTC households because some HFAs did not submit 2015 data. In addition, the information is requested at the household level or for individual household members, but reporting is not consistent. Still, the data submitted is significantly large enough to be a representative sample and provides useful information about the economic and demographic profiles of households residing in LIHTC properties.

As was the case in 2014, the reported 2015 vacancy rate was approximately 4 percent. Taken together with the 5 percent in 2013, the reports confirm consistently low vacancy rates, strong property performance, and high demand for LIHTC housing.

Though their share of all LIHTC tenants decreased in 2015, extremely low-income tenants (ELI), those making 30 percent or less of the area median income (AMI), still accounted for a large share of the tenants served. The percentage of tenants earning between 30 and 40 percent of AMI remained unchanged in 2015 at 18.2 percent. The other categories, tenants earning from 40 percent of AMI and up, all increased in 2015.

The increases in households earning more than 30 percent of AMI in 2015 can be explained by the fact that tenants are permitted to remain in LIHTC homes even as their incomes increase over time and exceed the maximum qualifying limits at move-in.  Allowing tenants to remain in-place, even as their incomes increase, gives them the sense of security and steadiness that comes from having affordable housing. The opportunities provided by stable housing, like improved job and health prospects, are some of the additional benefits of the LIHTC. 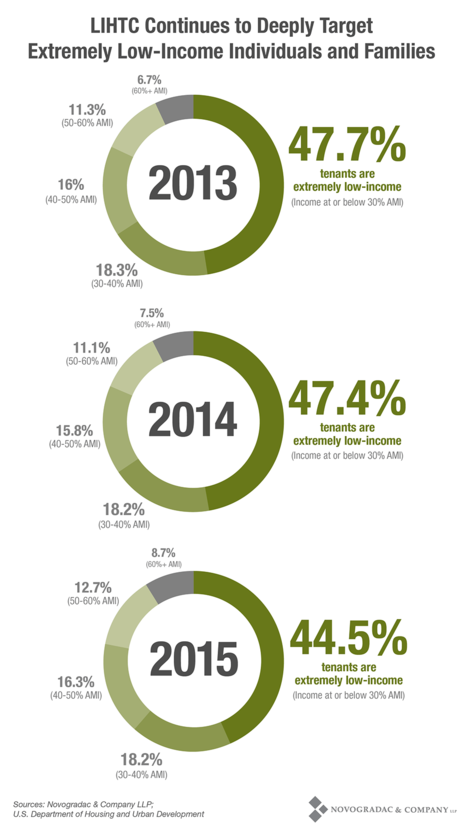 A 1997 report from the U.S. General Accounting Office (now Government Accountability Office (GAO)) provides a means to compare the tenant data from 1997 to data from the 2015 report.

For example, the 1997 report shows that 39 percent of households received rental assistance. The percentage hovered around this same level in 2013, 2014 and 2015. Rental assistance was slightly lower in each of the three most recent years than in 1997; in 2013, 35.9 percent of households received assistance, and in 2014 and 2015 the percentage was slightly higher at 37.8 percent and 37.9 percent, respectively.

However, given the increase in percentage of extremely low-income households in LIHTC properties since 1997, it’s possible to conclude that LIHTC properties are more deeply targeting the lowest income renters.  In 1997, GAO found that the average income of LIHTC tenants was 37 percent of AMI; however, in 2015 this number was estimated at about 30 percent of AMI. 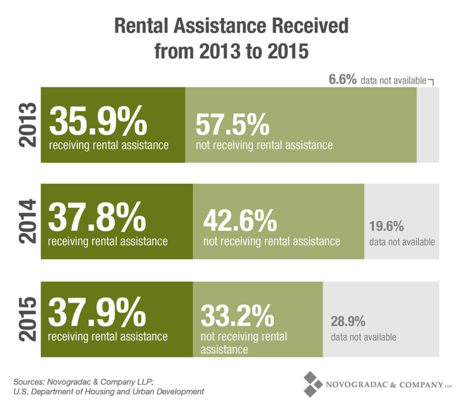 Shifts in Race and Ethnicity of LIHTC Households Reported 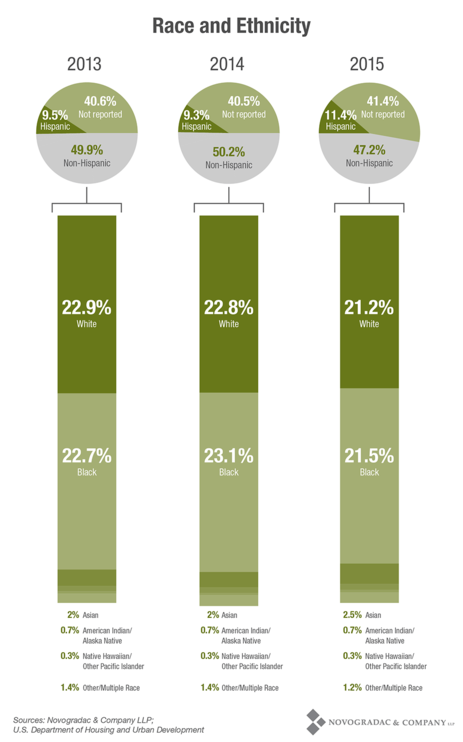 In 2015, there was no change in the percentage of households providing disability information. The 2015, and 2014 numbers represented an increase over 2013 when the percentage was 78.0 percent. There was also no change in the percentage of households that reported at least one disabled member. In 2013, the figure was 8.3 percent, 1.2 points lower than the 9.5 percent reported in 2014 and 2015.  As noted in this space last year, this figure is only what’s reported; LIHTC properties may serve materially more persons with disabilities than indicated.

Tenant data reported by HUD indicates the LIHTC continues to serve those most in need of assistance, namely ELI households and the disabled. The reduced rents provided by the LIHTC, coupled with rental assistance from federal and state programs. The report’s findings illustrate the continued success and necessity of the LIHTC.