LIHTC Housing Past Year 30: What this Means for Decision Makers

Housing stakeholders often have difficult choices to make due to various constituent needs, housing policy directives, and limited resources with which to work. As 2020 approaches, another issue is looming on the horizon:  low-income housing tax credit (LIHTC) properties that will start to reach “year 30,” the year in which some LIHTC properties are no longer obligated to adhere to income and affordability requirements.

In “Balancing Priorities: Preservation and Neighborhood Opportunity in the Low-Income Housing Tax Credit Program Beyond Year 30,” the National Low Income Housing Coalition (NLIHC) and the Public and Affordable Housing Research Corporation (PAHRC) describe the challenges facing stakeholders who must decide whether to direct limited resources to the preservation of LIHTC housing, or enhancing mobility options of low-income households. There is plentiful research on properties reaching year 15, known as the compliance period, so this effort by NLIHC and PAHRC to shine a light on the implications of projects approaching the end of the year 30 “extended use period” is to be commended. By their calculations, as many as 8,420 LIHTC properties with more than 486,000 affordable units will reach year 30 between 2020 and 2029. The report’s preservation conversation follows two fronts in terms of housing nearing year 30 – maintaining the affordability of LIHTC housing at risk of being converted to higher, market rental rates (an issue for units usually found in desirable neighborhoods), and physical preservation of those properties that may not be at risk of leaving the affordable housing pool, but are in need of improvements and lack the resources to make necessary repairs.  As part of an overall housing policy discussion, LIHTC production is also a factor, with the authors providing recommendations on where production efforts should be targeted.

In detailing the preservation problem, the authors categorize properties by location, labeling neighborhoods as desirable or areas of opportunity (these area descriptions are also used when talk turns to where to target new LIHTC housing production). Neighborhood desirability is defined by the preference to locate there and the quality of the neighborhood, while areas of opportunity present households with access to those things (transit, jobs, quality education) thought to enhance economic mobility. LIHTC housing targeted for preservation would be those properties located in areas that the authors rate as high or very high for desirability and opportunity, housing located in gentrifying areas, and housing in areas that while not desirable, by the report’s measures, are areas of opportunity.

In labeling neighborhoods in such a manner and then applying those labels to the housing located therein, leads to a somewhat familiar characterization of the LIHTC program as one where housing units are located in high poverty, inferior neighborhoods.  Compared to all housing or even all rental housing this argument can be made, but a more nuanced discussion is required to understand LIHTC siting patterns. Time and again evidence has been presented to counter misleading research that paints the LIHTC program with a broad brush and the questionable methodology used to arrive at their conclusions.  While the year 30 report does not go as far as other recent research, the authors do state that there is a “historical pattern to of subsidized housing being located in racially segregated and higher poverty neighborhoods,” though they add that LIHTC properties are better sited than public housing.

In previous blog posts Novogradac has questioned the methodology used to arrive at the conclusion that there is a connection between increased poverty rates and the location of LIHTC developments. To accurately present conclusions about the siting of LIHTC housing certain factors have to be accounted for, like the differences between allocations for new construction versus those for acquisition and rehabilitation. In evaluating whether the LIHTC is contributing to racial or poverty concentration, it is crucial to focus on new construction developments, especially those financed by 9 percent LIHTC, where state LIHTC allocating agencies have a direct role in siting developments. In addition, when comparing the siting of LIHTC housing one must also be sure to compare it to other multifamily rental housing, and not all rentals (which is predominantly composed of 1-4 unit family properties) or all housing.

In addition, research has found that over time, LIHTC properties may actually aid in the reduction in poverty rates in neighborhoods considered high-poverty. New York University research found that not only do LIHTC properties not contribute to segregation, but increased LIHTC use is associated with declines in racial segregation.

One other assertion made in the year 30 report that should be addressed is the claim that there is limited year 30 property data available. The authors highlighted the need for additional data on LIHTC housing and while increasing the amount and types of data collected about LIHTC properties is always a goal, it’s important not to downplay the data that is available. The report specifically calls out the HUD LIHTC database and housing finance agency (HFA) monitoring, emphasizing the lack of information on LIHTC properties beyond year 30. The authors suggest data provided by HFAs to HUD should not only include LIHTC affordability requirements, but also tenant characteristics and more on how properties’ ownership structures may change over time.  HFAs should be reporting this, and any other pertinent data they have, to HUD for inclusion in the database, but it’s worth noting there are sources for compliance period information. The National Council of State Housing Agencies’ (NCSHA) The State HFA Factbook: 2016 NCSHA Annual Survey Results (2016 Factbook) contains data to indicate which state agencies require tax credit allocatees to maintain affordability past year 30, and the percentage of units with extended use agreements longer than 30 years.

As detailed in the 2016 Factbook there are 14 states that require developers to maintain the affordability of housing past the LIHTC program’s combined 30 year compliance and extended use periods. In addition, there are another 14 states that award points or have some other incentive or requirement for developers to extend affordability. The report’s authors stated that they reviewed the qualified allocation plans from all 50 states and the District of Columbia, finding nine with extended affordability requirements. Their calculations did not include any other state and local incentives as this was beyond the scope of their report.

The table below lists those states that either require or incentivize the affordability of LIHTC housing past year 30 and the percentage of units that fall in each category, as reported in the 2016 Factbook. 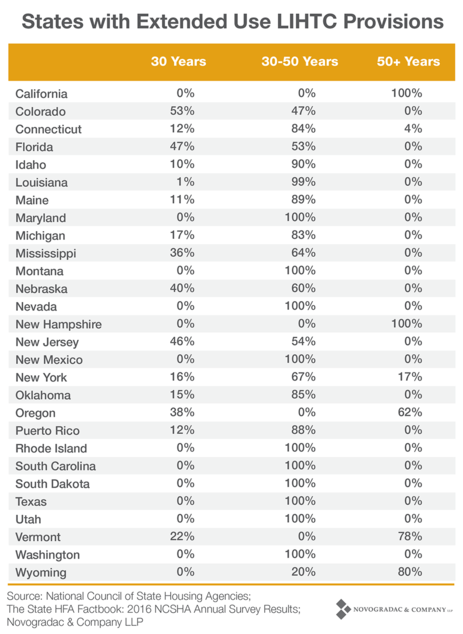 The policies of the 28 states listed above can provide other states with examples of how to enact extended use requirements and otherwise entice developers to keep LIHTC housing affordable past year 30.  These policies should be highlighted, studied and shared throughout the affordable housing community.

Ways to improve the LIHTC

Undoubtedly, policy makers have tough choices to make: Do they strive for an housing policy that emphasizes providing households with access to opportunities such as transit, jobs and education, or one in which the main goal is to strengthen communities and promote housing stability? If the former is the main objective, then maintaining the affordability of LIHTC housing in neighborhoods found to be desirable and/or areas of opportunity and steering new production to these areas would be the goal. The promotion of Housing Choice Vouchers would also be a tool to help move households to these “better” neighborhoods.  In the case of the latter, LIHTC housing would be preserved, no matter its location.

With more than 3 million housing units produced since its inception, the LIHTC is the most successful affordable rental housing production program in the country. Still, there are tweaks that can be made to the program, most notable those outlined in the bipartisan Affordable Housing Credit Improvement Act (AHCIA) introduced by Sens. Maria Cantwell, D-Wash., Orrin Hatch, R-Utah, and Reps. Carlos Curbelo, R-Fla., and Richard Neal, D-Mass. The bills are mentioned in the year 30 report and contain provisions that would enable the LIHTC to access higher opportunity areas and enable very low-income households to access those areas, the very goals the Year 30 report hopes to encourage. The NLIHC/PAHRC report  goes a step further, suggesting changes to the fundamental way in which the LIHTC is allocated, who should be involved, and dictating which affordable housing units are more deserving of protection, based on decision-makers’ priorities. The report highlights several recommendations:

There are certainly controversial aspects of the recommendations made by the report. Changing the allocation of credits in the manor outlined in the report would mean that some states would lose credits, making it difficult to garner support for such a measure.  And the promotion of non-profit over for-profit owners not only implies that all, or even most, for-profit owners are looking to remove housing units from the affordable stock, but it also downplays the public-private aspect of the LIHTC incentive.  Whether any of these recommendations ultimately prove feasible, it is commendable that there are researchers looking for ways to improve the LIHTC, improve households’ access to better transit, schools and job centers, and highlight the tough choices that need to be made when housing resources are limited.

Those advocating for the preservation of LIHTC housing also have numerous provisions of the AHCIA at their disposal such as: making permanent a minimum 4 percent LIHTC rate; clarifying the ability to claim housing credits after casualty losses; modifying rights related to building purchase; modifying the ten year rule; the inclusion of relocation expenses in rehabilitation expenditures; allowing states to award a basis boost to housing bond-financed developments; and increasing the population cap for difficult development areas. Promoting the enactment of these provisions would help to ensure LIHTC housing remains affordable and funds would be available to repair and preserve existing housing.