A change in a 30-year-old statutory provision for tax-exempt private activity bond (PAB) financing for affordable rental housing could result in hundreds of thousands of additional homes being built or preserved over a decade–a change that could also rescue some properties whose construction is endangered by the COVID-19 pandemic.

The increase in homes built or preserved is the chief conclusion of “Analyzing the Impact of Lowering the 50% Test for 4% Tax-Exempt Bond Financed Properties,” an analysis conducted by Novogradac for the National Council of State Housing Agencies (NCSHA). The study forecasts the outcome from a reduction in the percentage of aggregate basis required to be financed by PABs for affordable housing properties to be eligible for the full amount of 4 percent low-income housing tax credits (LIHTCs). Depending on several factors–the new percentage, whether all “freed” PAB cap would be used for residential rental housing and how scalable gap financing is presumed to be–the estimated number of additional units that could be created or preserved over a decade range from 177,665 to 1,421,320. 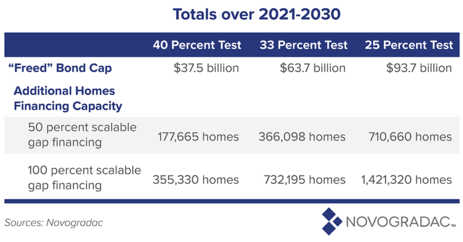 The NCSHA-Novogradac study was commissioned before the COVID-19 pandemic disrupted American life and caused a likely recession, but the presumed post-pandemic recession makes the need for affordable housing even more pressing and heightens the value of a statutory change that could result in a boost for construction of affordable homes. Some properties currently under construction or preparing for construction are in danger of failing to meet the required standard of PAB financing because of pandemic-driven cost increases and deadline extensions. A change in the statute could preserve those properties.

Under current law, if at least 50 percent of a rental housing property’s aggregate basis (land and building) is financed by PABs, the property is eligible to receive the full amount of 4 percent LIHTCs.

Historically, properties are allocated PABs in excess of 50 percent to ensure they don’t fail the test, since not receiving the full amount of 4 percent LIHTCs could render a property financially infeasible. The common practice is to finance 52 percent to 58 percent of the aggregate basis with PABs.

Some states have a lot of bond cap available, but others are at or are nearing the annual cap. The number of bond-cap-constrained states is likely to increase in coming years.

The number of states reaching their PAB cap increased in recent years–at the same time the percentage of national PAB issuance devoted to residential rental real estate increased. Over the past decade, states have increased their focus on using PABs for rental housing: According to annual reports by the Council of Development Finance Agencies (CDFA), the percentage of PAB issuance to residential rental real estate didn’t surpass 40 percent until 2012 but has been above 60 percent each year since 2016.

Each state receives an annual amount of PAB cap to be used for a variety of purposes–including residential rental real estate. Some states (California, Colorado, Massachusetts, New York, Tennessee, Washington) allocate nearly all PAB cap for housing, while others use little to none. States reflect the national emphasis on housing; in 2018, 24 of the 51 agencies reported to CDFA that at least half of their PAB issuance was used on residential rental.

Simultaneously, the use of bonds is increasing. A key takeaway from the most recent CDFA report is that the carryforward amount for states–the amount of unused PAB issuance to the state over the previous three years–dropped from $62.4 billion to $51.1 billion during 2016-2018, a decrease that shows no signs of abating.

Decreasing the threshold for the percentage of aggregate basis for PAB-financed properties to be eligible for LIHTCs is one way to stretch the resource.

Different Scenarios, but All Show Increase

Novogradac analyzed the impact on affordable housing production and preservation under various scenarios for changing the PAB 50 percent test. The study looked at the implications of reducing the required amount of aggregate basis to be financed by PABs to 40 percent, 33 percent and 25 percent. Novogradac examined how much bond cap would be “freed” by such moves–since less cap would be required to finance the same number of homes. The study also considered two scenarios for gap financing–if gap financing in the scenarios was scalable at 100 percent or at 50 percent, the latter of which would obviously result in fewer homes being built.

There are multiple ways to increase the number of affordable apartments for Americans, including establishing a minimum 4 percent LIHTC floor (which would add equity) and increasing the annual 9 percent LIHTC allocations.

Reducing the threshold for PAB financing would have a dramatic effect–and it wouldn’t be the first time the issue was addressed. In 1990, the threshold was lowered from 70 percent to 50 percent to make many more PAB-financed developments financially feasible.

A change to the threshold for the aggregate basis required to be financed by PABs could be enacted as a response to COVID-19 or in other legislation. Regardless of how it was done, such a move could free up billions of dollars of bond cap and allow tens of thousands–potentially hundreds of thousands–of affordable rental homes to be financed every year.