Until 2015, operating expenses for low-income housing tax credit (LIHTC) properties grew at a fairly consistent pace. And while there was growth in 2015, year-over-year change was much slower than in years past, increasing just 1.3 percent. Then, in 2016 there was a 3.8 percent increase in total operating expenses, according to the Novogradac 2018 Multifamily Rental Housing Operating Expense Report-Survey and Analysis of LIHTC Properties reports a.

While year-over-year growth rates of total median expenses varied in 2015 and 2016, compounded annual growth from 2010, the first year for which survey data was collected, to 2016 was 2.7 percent, and more in line with previous rates of expense growth. Furthermore, the two-year average of 2015 and 2016 expense growth (2.5 percent) is very close to the year-over-year growth seen in prior years. That the two most recent operating expense surveys of LIHTC properties have revealed changeable rates of expense growth, begs the question: Will the consistency seen in the initial years of the survey return or will growth rates continue to fluctuate? 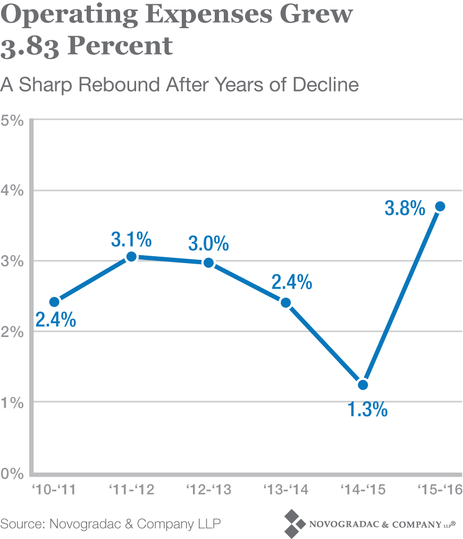 About the Novogradac 2018 Operating Expense Report

Novogradac’s 2018 operating expense report analyzes expense data on nearly 1,700 properties, with more than 190,000 affordable rental homes, from across the country. Each year, more properties and units are added to Novogradac’s database of multifamily properties and a survey is conducted to derive expense trends. While this dataset does not represent the entire LIHTC universe of properties, the expense trends described therein are largely representative of the industry as a whole.

Why Did Expense Growth Double in 2016?

So, what might explain the fact that overall operating expenses grew at nearly twice the pace in 2016 as they did in 2015?

First, changes in individual expense categories may help to explain the faster rate of growth seen in 2016. As in previous years, Novogradac’s 2018 report found that repairs and maintenance, utilities, and payroll were the largest expense categories, accounting for more than 60 percent of total expenses. Repairs and maintenance had the largest year-over year change in expenses from 2015 to 2016, a 6.8 percent increase. Other categories with relatively large increases include management fees and operating expenses (comprised of extermination, trash and security, among other things).

From 2015 to 2016, property insurance, management fees, utilities and operating expenses all saw an increase from 2015 to 2016, where from 2014-2015 those expenses had decreased. Compounded growth in these categories from 2010 to 2016 was more consistent, ranging from 1.7 percent to 3.3 percent. While it remains to be seen if the fluctuations in year-over-year growth in these categories will effect compounded annual long-term growth, they do help to explain the varied rates growth rates realized in 2015 and 2016.

While changes in individual categories of expenses is the main factor in the faster growth rate reported in the 2018 report, the sample used as the report’s basis may be a factor; California has a large representation in Novogradac’s dataset. In 2015, the state had a slight increase in expenses of 0.2 percent, the same year the overall dataset had the slowest rate of growth in the report’s history. In 2016, however, California saw a 4.5 percent increase in expenses; total operating expenses for the entire dataset increased at a faster pace as well, growing 3.8 percent.

That said, it should also be noted California’s compounded annual growth rate from 2010 to 2016 was 2.6 percent, similar to the 2.7 percent growth rate reported for the entire dataset during that timeframe. Other similarities between California and the entire dataset include expense category growth.  From 2015 to 2016 the expense category with the largest growth in California was repairs and maintenance as it was for the larger dataset, with an 11.6 percent increase. As the largest state, it stands to reason that California’s operating expense trends foretell the country’s operating expense trends.

Finally, last year Novogradac surmised that the growth rate of operating expenses slowed in 2015 as property owners may have been more conscientious about spending. The quickening pace of growth seen in 2016 may have been a course correction as LIHTC property owners returned to normal spending habits or perhaps was the beginning of a trend of increased spending.

Read more about the cost of operating LIHTC properties and learn what to expect in different situations with the Novogradac 2018 Multifamily Rental Housing Operating Expense Report. Additionally, Novogradac will continue to monitor operating expense trends throughout the year, so watch this space for further analysis.