Median Operating Expenses in 2017 Grew at 2.3 Percent, in line with Previous Norms

After some volatility in 2015 and 2016, the year-over-year change in overall expenses for low-income housing tax credit (LIHTC) properties in 2017 was more in line with the previous norms: an increase of 2.3 percent, according to according to the Novogradac 2019 Multifamily Rental Housing Operating Expense Report-Survey and Analysis of LIHTC Properties. Including this growth, LIHTC operating expenses grew at a compounded annual rate of 2.6 percent from 2010 to 2017. 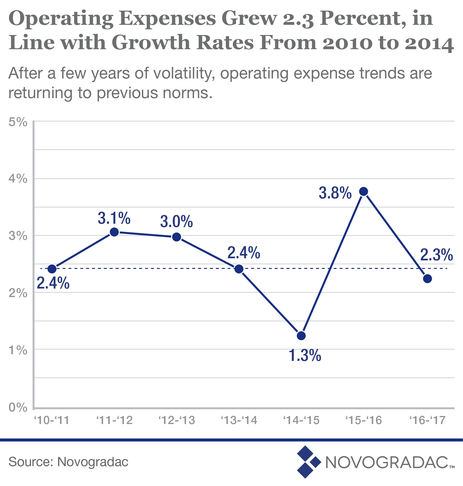 About the Novogradac 2019 Operating Expense Report

Novogradac’s 2019 operating expense report analyzes expense data on nearly 1,700 properties, with more than 190,000 affordable rental homes, from across the country. Each year, more properties and units are added to Novogradac’s database of multifamily properties and a survey is conducted to derive expense trends. While this dataset does not represent the entire LIHTC universe of properties, the expense trends described therein are largely representative of the industry as a whole.

Looking at Growth in 2017 and Over Time

Last year’s report theorized that the low rate of increase seen from 2014 to 2015 could be the result of property managers being more conscientious about cutting costs and the 2016 data may have represented a return to normal spending habits, resulting in a large year-over-year increase. The volatility in the year-over-year change during the couple of years notwithstanding, the relatively stable compounded annual growth of operating expenses at LIHTC properties may provide a more accurate picture. That said, it is still too soon to tell if expense growth is returning to previous norms.

From 2011 through 2015, operating expenses grew, but at a rapidly decreasing rate.  In that regard, 2017’s 2.3 percent increase in expense growth may be a good sign for the affordable housing community. The benefit of relatively stable growth rates for LIHTC properties’ operating expenses is that they are predictably consistent.

So, if 2017 represents a return to previous norms, overall expense growth has been relatively consistent. The Novogradac 2019 Multifamily Rental Housing Operating Expense Report-Survey and Analysis of LIHTC Properties also considers this growth in context by comparing it to other economic growth measures.

Read more about the cost of operating LIHTC properties and learn what to expect in different situations with the Novogradac 2019 Multifamily Rental Housing Operating Expense Report-Survey and Analysis of LIHTC Properties. Additionally, Novogradac will also share further analysis from this year’s report in this space in the coming weeks.