This data and analysis is welcome for the affordable housing community because understanding the market is a key component to the decision of developing affordable housing in this region. That said, this data is no surprise. Novogradac recently completed several market studies in West Virginia, which is within the rural Middle Appalachia area. Some of the findings from those market studies underscore the need to be diligent and cautious when analyzing similar markets that may not be keeping pace with national norms.

Based on Novogradac’s extensive market analysis experience within the rural Middle Appalachian study area, one of the important characteristics of the local economy is the uneven nature of employment change. 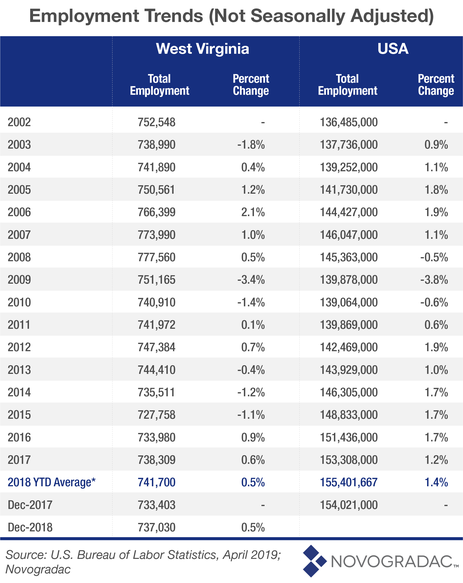 Prior to the Great Recession, West Virginia grew but moderately lagged the national economy. This changed rather dramatically with the Great Recession. Clearly, this employment change in light of national trends is reason for concern and a deeper look.

When a developer, underwriter, investor or market analyst is evaluating similar markets, it is important to dig deeper to understand population, employment and income trends. Growth, stability or contraction in these markets is often uneven and localized. On Oct. 3, 2018, in remarks at a statewide Economic Outlook Conference in Charleston, W.Va., John Deskins, an economist and director of West Virginia University’s Bureau of Business and Economic Research, called West Virginia “a picture of an uneven economic recovery.” The state is projected to lose population overall in the coming years. Yet, pockets of growth exist. The Eastern Panhandle benefits from being in the Washington, D.C., metropolitan statistical area (MSA) and is experiencing population growth as commuters search for affordable housing options. The northern portion of the state benefits from several unrelated growth opportunities: its location near the Pittsburgh primary area MSA; the university campus in Morgantown, W.Va.; the recently more healthy coal mining industry; and the surge in non-traditional gas extraction methods.

The table above illustrates the importance of mining within West Virginia. For example, a quick look at job numbers illustrates a long decline in mining employment across the entire Middle Appalachian region. This has reversed by a small margin in 2016 and 2017. However, the reversal has not been uniform. This unevenness has a geological explanation. There are two types of coal: thermal and metallurgic. Thermal coal is used to generate electricity and demand for thermal coal has not seen growth because natural gas is more economical. Metallurgical coal (a.k.a. coking coal) is a key ingredient in steel, which natural gas cannot replace.  As such, certain coal fields may sit idle as others seek workers. This may put pressure on workers to move, because these fields are often too far from each other to commute.

The advent of fracking was a welcome jobs boost for the northern reaches of the study area but decreased as commodity prices drove infeasibility between 2014 and 2018. However, new pipelines and export potential are offering hope in this natural resource extraction industry. Again, the mining industry provides a good example of the importance of truly parsing what the aggregated numbers could mean for a local economy.

West Virginia’s population declined for the fifth straight year in 2017, according to the West Virginia Economic Outlook 2019-2023, published by the Bureau of Business & Economic Research, College of Business and Economics, West Virginia University. Further, the study reports that 45 of 55 counties lost residents between 2016 and 2017. However, not all population trends are the result of economic trends; tragically, the report says, “…the rate of decline has increased sharply in recent years as death rates among several age groups has surged, due in large part to the dramatic increase in drug overdose deaths.”

When viewing other demographic shifts, aging population is another common theme in market study work that resonates with the Freddie Mac’s analysis. The median age in West Virginias is 42.5 years old while the median for the nation is 38.  However, this may not translate to full senior properties. Many senior apartment properties in stagnant, no-growth markets have higher-than-normal vacancies. While many seniors are reluctant to leave geographies they have known a lifetime, it is clear many seniors are forced to leave by life circumstances. This not only affects younger generations, but property managers for senior developments also report that many older West Virginians are moving to be closer to their adult children who have established themselves in larger metropolitan areas outside of Middle Appalachia.

However, while the state population growth lags national levels it also illustrates general stability in the overall number of residents. Clearly, economic hardship does not uniformly correlate to declining populations or empty multifamily properties. For example, in a recently completed market analysis in Fayette County, W.V., local employment levels were found to be in the midst of an eight-year decrease. Meanwhile, population and household levels in Fayette County are constant over the same period. At the same time, apartment vacancy in the area is approximately 10 percent, which is high by national standards but only moderate when considering the stable population and declining employment options. An example of a more stable market would be in Fairmont, W. Va., where the federal government is a major employer. Employment growth has been inconsistent, with employment rates declining in three of the past seven years. Over the same period, population and household growth has been positive. Income levels in Fairmont are above the state median, and area median gross income (AMGI) growth has been positive over the period with only one negative year. The apartment properties in the Fairmont market report more robust rent levels and occupancies at approximately 95 percent.

As illustrated by these examples, market analysis in Middle Appalachia is challenging and very localized. Therefore, scrutiny of economic indications such as job growth, type of job development, income growth and age of population are all factors on which many local developers place a premium. This more robust understanding may aid the area in focusing efforts in areas of need. This may help alleviate some of the barriers to development in the region.