More than $12 Billion in LIHTC Provisions and Nearly $6 Billion for Neighborhood Homes Tax Credits in Nov. 3 Draft of the Build Back Better Reconciliation Bill Would Finance Close to 1 Million Affordable Homes Over 2022-31

Nearly 1.9 Million People Could be Affordably Housed as a Result of the Primary LIHTC Unit Financing Provisions of the Nov. 3 BBB Reconciliation Bill

Based on research conducted by the National Association of Home Builders, Novogradac estimates the 811,900 homes financed by the primary LIHTC unit financing provisions could house nearly 1.9 million low-income people. The financing of these homes would also generate over a decade:

That tax revenue generated is $34.7 billion more than the estimated $12.7 billion in federal cost, according to the Joint Committee on Taxation. Through the financing of these additional affordable homes, the reconciliation bill would go a long way in assisting the millions of low-income households who are cost burdened, cannot find affordable housing, or are experiencing homelessness.

The estimates presented in this post are part of Novogradac’s ongoing analysis of rental housing provisions included in proposed legislation to enhance and expand the LIHTC and private activity bond (PAB) rental home financing. For each estimate detailed below, several steps were taken to arrive at the additional affordable rental homes projected to be financed. In the case of each set of estimates, certain provisions provide the foundation upon which additional analysis is based. For 9% estimates, the analysis assumes the 2021 amounts, as adjusted by the temporary 12.5% allocation increase enacted in 2018 and expiring at the end of 2021 is the baseline from which the three years of allocation increases are applied. Additionally, all of the estimates assume that gap financing is scalable with the increased availability of LIHTC equity and PAB debt, which seems a reasonable proposition, given the more than $156 billion in U.S. Department of Housing and Urban Development, U.S. Treasury’s Community Development Financial Institutions Fund, and U.S. Department of Agriculture rural housing supplemental funding available in the housing and community development spending portion of the Nov. 3 BBB reconciliation bill. The scalability of gap financing applies more so to 4% LIHTC properties than to the 9% LIHTC properties in the analysis that follows, because the 4% LIHTC is a shallower subsidy than the 9% LIHTC.

The reconciliation bill would temporarily reduce the tax-exempt PAB financed-by threshold from 50% to 25% for buildings financed by obligations issued in calendar years (CY) 2022-2026, but not obligations issued prior to CY 2022 or after CY 2026. Novogradac estimates lowering the threshold from 50% to 25% could generate an additional 714,400 affordable rental homes financed by 2022-2026 multifamily PAB issuances. This estimate is updated by the recent 2020 Council of Development Finance Agencies 2019-2020 National Private Activity Bond Volume Report.

The 2025 estimated amounts are based on the 2017 baseline as adjusted annually for inflation during 2018-2024 before the 12.5% allocation increase was enacted in 2018 (and is scheduled to expire at the end of 2021). Novogradac estimates these increases could finance 43,900 additional affordable rental homes over 2022-2031. This estimate excludes units in 9% LIHTC properties receiving the 50% extremely low-income (ELI) basis boost described below.

Novogradac estimates that 9% unit financing would decrease during 2025-2031 as compared to current law because both the 12.5% allocation increase from 2018 and the three annual 10% plus inflation increases during 2022-24 would expire in 2025 but the ELI set-aside described below would continue during 2025-2031.  Because units underwritten for ELI households generally have more 9% allocation per unit than non-ELI units, Novogradac estimates about 9,000 fewer 9% units will be financed during 2025-31.

The reconciliation bill would provide a permanent maximum 50% basis boost for units serving ELI tenants if needed for financial feasibility that Novogradac estimates could finance an additional 53,600 affordable rental homes in 4% and 9% LIHTC properties over 2022-2031. This estimate includes ELI units in 9% properties not accounted for under the 9% allocation increase estimate above. The reconciliation bill states that not more than 92% of 9% LIHTC allocations can be for buildings that reserve less than 20% of their units underwritten for ELI households. ELI households are those earning at or below the greater of 30% of the area median income or the federal poverty line. To qualify for the proposed 50% basis boost, at least 20% of the units in the property would have to be underwritten and set aside for ELI households and the increased boost is available only for those units set aside for ELI households. The reconciliation bill further limits the availability of the 50% ELI basis boost to no more than 13% of 9% LIHTC allocations or properties financed by no more than 8% of each state’s PAB volume cap.

Given the deep subsidies required to make rental homes affordable to ELI households, additional tools—such as the targeted maximum 50% basis boost proposed—are needed to make properties financially feasible. The purpose of the 50% ELI basis boost is to reduce hard debt as much as possible to offset for the reduction in income generated by the lower rents charged to the ELI rental homes.

Novogradac estimated the number of rental homes that could be financed with the increased equity and lower debt service. In the case of 4% LIHTC properties, the ELI basis boost would likely be used in properties financed under the Rental Assistance Demonstration program, with its focus on preserving public housing properties by leveraging private investment, or other federally assisted properties serving ELI households.

The reconciliation bill would designate Native American areas as difficult development areas, as proposed by the reconciliation bill, would help to alleviate one of the difficulties specifically related to development in these areas. Because land belonging to reservations cannot be used to collateralize a loan, and also cannot be sold, it is difficult to obtain conventional debt for properties in Native areas. The additional LIHTCs that would result from this particular basis boost would help to address affordable housing needs on tribal lands by reducing the amount of debt a development would need to take on, thus also reducing the risk to the lender. Native American LIHTC properties also tend to have lower LIHTC equity pricing, thereby reducing the amount of equity available. As with the similar proposals in AHCIA, the basis boost provisions included in the reconciliation bill would expand upon existing boosts already allowed under current law. Basis boosts increase a property’s maximum LIHTC allocation, thus allowing that property to generate more LIHTC equity. This increase in equity makes new construction or rehabilitation of an existing property more financially feasible. The additional LIHTCs would help address that issue as well. This provision is effective for properties placed in service after Dec. 31, 2021. 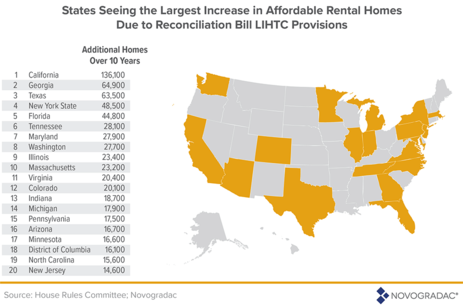 In addition to these major unit-financing provisions analyzed above, the reconciliation bill would also:

The House is scheduled to consider the legislation the week of Nov. 15 after the rules for considering the bill on the House floor were approved Nov. 5. The House is not in session the week of Nov. 8, as it often does not schedule votes during the week of Veteran’s Day (Nov. 11). The passage of House floor rules for the legislation was made possible by an agreement between House moderate Democrats, especially those in the Problem Solvers and Blue Dog caucuses, and House progressive Democrats. That agreement also allowed the Infrastructure Investment and Jobs Act, the bipartisan infrastructure legislation to be voted upon Nov. 5 and subsequently pass the House toward enactment after President Biden signs the bill as expected.

One key component of the agreement was the importance of the forthcoming score of the legislation by the Congressional Budget Office, which may or may not confirm the cost estimates provided by the White House. However, even the cost estimates differ, House moderate Democrats pledged to work with leadership to resolve these differences and consider the legislation. Such a resolution may postpone House consideration of the bill until the week of Thanksgiving.

If the bill passes the House before Thanksgiving, the Senate is expected to take up the legislation directly on the floor the week of Nov. 29.  Before it can be voted upon, the Senate Parliamentarian must review the entire bill for compliance with the Byrd Rule governing budget reconciliation bills in the Senate.  Such a review may lead to certain proposals being dropped and other changes being made. If so, the House would need to consider the bill again if the Senate passes such a revised bill. It may take until Christmas or New Year’s before final legislation could be enacted. Stay tuned.

ESG Investing: Where it is Now; Where it’s Headed; What to Do
Everything You Need to Know about State LIHTCs in 2022
Knowing What Makes a Property Unique, Distinct is Vital in the Preservation of Affordable Housing
END_OF_DOCUMENT_TOKEN_TO_BE_REPLACED