The Council of Development Finance Agencies (CDFA) reports that in 2019 housing finance agencies issued a record $16.4 billion in multifamily private activity bonds (PABs), a $1.69 billion or11.5% increase from 2018. Furthermore, $9.48 in single family mortgage revenue bonds were issued, a $2.12 billion or 22.4% gain from 2018. A combined $25.9 billion in multifamily and single-family housing bonds were issued; while this was a $3.81 billion increase in numeric terms, it was a reduction as a proportion of total PAB issuance ($30.8 billion), falling from 91.5% in 2018 to 84.1% in 2019. Six states reported no multifamily PAB issuance (another two states failed to report), repeating 2018’s historic low. This number has been trending down since 2011 when 32 states issued no multifamily PABs. 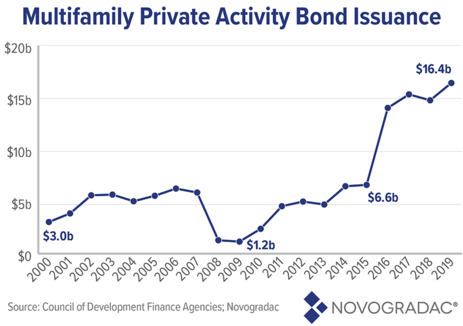 The annual private activity bond cap available for 2019 was $37.4 billion, a modest increase from $37.1 billion in 2018. On top of the new 2019 bond cap available, there was an another $50.2 billion in existing carryforward allocation, resulting in a total national volume cap of $86.3 billion available.

At the state level, California reported a new single state issuance record, at $5.38 billion, while Texas, Georgia, Washington, Florida, Massachusetts, Virginia and Colorado all set new state records as well; Texas, New York and Georgia all issued in excess of $1 billion in PABs, with Texas and Georgia crossing the $1 billion threshold for the first time. Six states issued no multifamily bonds, the same number as 2018, and a dramatic decrease from the 2011 high, when 32 states failed to issue any multifamily bonds. No state failed to report its 2019 multifamily housing bond issuance.

In the period from 2016-2019 where multifamily issuance has recently expanded, more than 84% of national multifamily PAB issuance came from just 15 states. This marks a broadening in the number of states issuing multifamily bonds; if 2019 is eliminated from the range, only 11 states accounted for more than 75% of issuance. 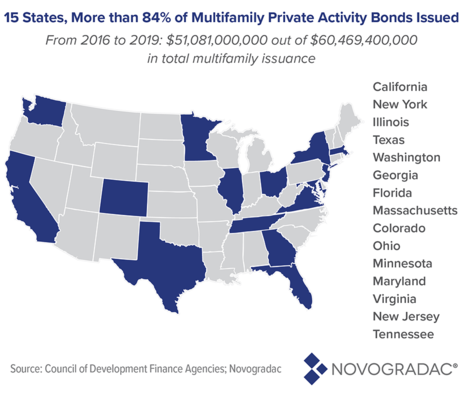 In line with averages from 2000-2019, the three states with the most bond issuance were California, New York and Texas. Georgia was fourth in terms of multifamily bond issuance, well ahead of its eighth highest average ranking over 2000-2019. Notably, multifamily issuance alone in California and Washington was in excess of 100% of their PAB caps. When considering all PAB issuance, California, Georgia, Kansas, Maryland, Massachusetts, Mississippi, Nebraska, Nevada, New Mexico, North Dakota, Ohio, Rhode Island, Tennessee, Washington and Washington D.C. all issued more than their annual cap. In the long run, this issuance in excess of annual cap is not sustainable. These states would benefit from reducing PAB “financed by” test (better known as the 50% test) for PAB-financed properties to qualify for the maximum amount of 4% low income housing tax credit to 25%, enabling a more efficient use of PABs for LIHTC properties. Additionally, revising the existing authority to recycle multifamily bonds to allow recycled proceeds fund single-family mortgage revenue bonds would enable more new PAB cap to be used for multifamily bonds and thus generate 4% LIHTC. The Affordable Housing Credit Improvement Act (AHCIA, H.R. 2573, S. 1136) contains both proposals. 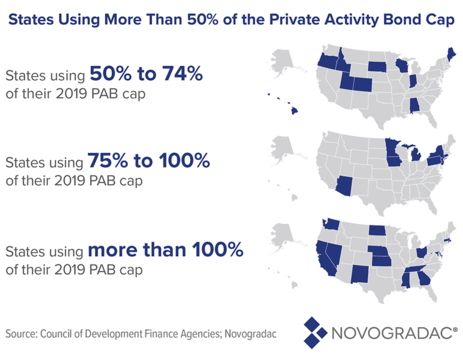 The 2019 data continue a trend of increasing multifamily bond issuance. As detailed in a previous Notes from Novogradac post predicting the surge in multifamily bond issuance was sustainable, from 2000 until the financial crisis of 2008, issuance rose steadily – after a slower 2008 and 2009, the market rebounded (the sharpest gains happening from 2015 to 2016 when issuance more than doubled), with 2019’s $16.4 billion in issuance a record high. While a reduction in multifamily bond issuance for 2020 appears likely as a result of COVID-19, the enactment of the 4% floor, as part of the fiscal year 2021 omnibus bill, is expected to lead to a resumption in growth for PAB issuance in 2021, with the possibility of attaining record highs.

When a state receives its annual cap, it may carry the cap forward for three years before it expires. When reporting carryforward, states specify their use and cannot use that cap for another purpose (e.g., a housing bond cannot be used for industrial development purposes). So, the less annual cap a state issues in a given year, the more it will carryforward. Following a long period of growth in the amount of PAB cap carryforward, reaching $62.4 billion in 2016 and 2017, 2019 continued the decline that began in 2018, with a carryforward of $39.9 billion. This represents a 21.9% decline from the previous year. Six states (Connecticut, Massachusetts, New Mexico, New York, Utah and Washington) carryforwarded into 2020 less than 50% of their 2019 cap. Six states and Washington, D.C. did not report their carryforward into 2020 (pandemic-related effects negatively impacted reporting), while all states that did report had some level of carryforward, which is down from three states reporting no carryforward in 2017 and 2018. Overall, states carried forward 107% of their annual cap, a 31% reduction from 2018. Given that states are using more of their cap, with less carryforward than previous years, it is now likely that lowering the 50% test will produce significant benefits for cap-constrained states. 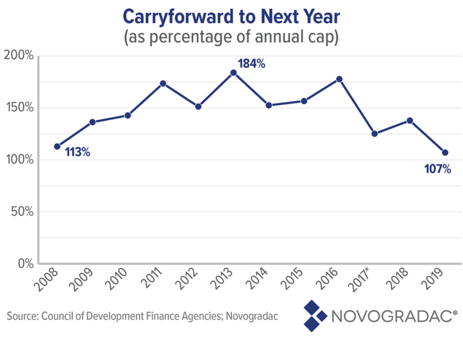 Abandoned carryforward (which grew from 2000-2014) continued to decline in 2019, as it has since its peak of nearly $12 billion in 2014, with CDFA reporting $3.55 billion for the year. In fact, 23 states reported no lost cap, the highest such number since 2009, when the fallout from the recession led to more states losing PAB cap. 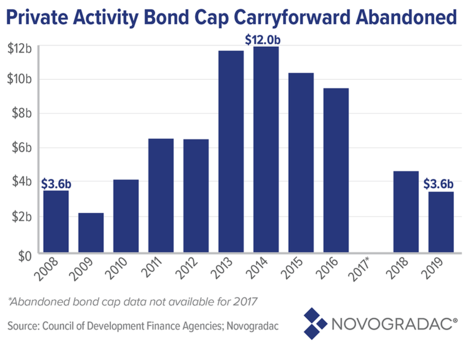 CDFA reports that $3.55 billion (9.5% of the total cap) in PAB cap was abandoned in 2019, a 25.2% reduction from the $4.75 billion abandoned in 2018. This likely represents a significant improvement in the efficiency with which states are able to utilize their PAB cap. Abandoned bond cap was not reported by Alaska, Arizona, California, Florida, Iowa, Mississippi, Missouri, New Hampshire, New York or Tennessee, one fewer than the 10 states who failed to report in 2018. However, there is a good chance that many of these states (particularly California, New York and Tennessee) lost little or no PAB cap.

In 2019, CDFA reported record high multifamily and total PAB issuance; though a brief dip is expected due to the impacts of COVID-19, the trend of increased multifamily issuance will likely continue. Yet as states continue to report declining carryforward, paired with an ever more competitive market for bonds, the expansion of issuance may be counteracted to some extent. This could mean there will befewer PABs available for multifamily housing over the next several years, unless Congress acts. Provisions in the Affordable Housing Credit Improvement Act of 2021 (AHCIA, H.R. 2573, S. 1136), which would lower the 50% test to 25% and expand recycling of multifamily bonds, could be included in infrastructure reconciliation legislation, and such reconciliation legislation is likely to be considered by Congress in the next few months. If passed, such legislation will significantly expand the availability of PABs for multifamily housing in the coming years.