Households earning minimum wage increasingly are priced out of apartments all over the country, as reported in the National Low-Income Housing Coalition’s (NLIHC) annual “Out of Reach” report.  In this context, the Department of Housing and Urban Development’s (HUD) recent announcement of Housing Trust Fund (HTF) allocations is welcome news.

By contrast, the administration has proposed reducing and even zeroing out other HUD programs. The HTF is in a better position than those because it is not subject to appropriation. Instead, Fannie Mae and Freddie Mac fund the HTF, and the amount depends on the volume of their business. (See the April 2015 issue of Novogradac’s Journal of Tax Credits for additional background and specifics.)

Income Limits and Minimum Wages
Another crucial distinction between the HTF and other activities is who it serves: By law HTF beneficiaries must have incomes below the poverty line or 30 percent of the area median (whichever is greater). The latter is known as being extremely low income (ELI). As NLIHC explains in its Out of Reach report, this population faces great difficulty finding reasonably priced places to live.

But will the HTF help address the problem? The disappointing answer is not always. Many ELI households have workers earning the minimum wage, and despite being employed, still are in significant need of affordable housing.  Depending on the specifics, it’s possible for minimum wage earners to exceed HTF income limits.

The chart of 51 example metropolitan areas below illustrates this scenario. A hypothetical family of four with two members each working 37 hours for 48 weeks (1,776 hours over 12 months) makes too much in all but a couple of cities, one being San Francisco. The balance tips at five people, who could move into an HTF apartment in 32 of the 51, and single individuals qualify in all but a dozen areas. 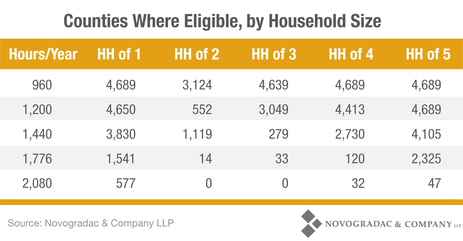 Nationwide the picture is similar. The matrix below shows in how many counties a household would be eligible when two people (one for a single person) each earn the state’s minimum wage for the number of hours listed.

While it doesn’t sound logical, the reality is one could legally not make any less per hour but still be paid too much to occupy affordable housing.

Permanent Supportive Housing
Another reality is that not everyone is able to fully participate in the workforce: Many thousands of people are homeless and/or receive Supplemental Security Income (SSI) because of a disabling condition. The current SSI payment standards are $8,831 for an individual and $13,245 for a couple. SSI is below the HTF income limits in all counties.

As is true for ELI households overall, the supply of safe, decent, affordable places for the homeless and persons with disabilities to live is woefully inadequate. Therefore, between this need and being income eligible, permanent supportive housing (PSH) is a natural HTF program activity. NLIHC reviewed states’ allocation plans and found more than half explicitly include building PSH to serve these populations. Doing so involves various practical and legal considerations, but fortunately there are several examples of successful state programs.

Financial Underwriting
One of the most important considerations when developing HTF apartments is what funding sources are necessary; for at least two reasons HTF alone almost never will be enough.  First, without additional capital, most states’ entire allocation is inadequate to build even a 24-unit property.

The other reason is financial underwriting. While the specifics are complex and will vary, approximate national averages paint a fairly clear picture:

One solution to the expense/revenue dilemma is to have a mix of targeting, where rents paid by higher-income households effectively subsidize the HTF apartments. Such an approach means additional funding sources, including the low-income housing tax credit (LIHTC).

Using LIHTCs
Combining HTF with LIHTCs has great promise, and would be even more effective upon enactment of the Affordable Housing Credit Improvement Act (AHCIA). The legislation was introduced earlier this year by Sens. Orrin Hatch, R-Utah, and Maria Cantwell, D-Wash. and Reps. Pat Tiberi, R-Ohio, and Richard Neal, D-Mass.

AHCIA has two provisions which would help develop properties with HTF apartments. The income averaging option would allow occupancy by households with incomes above 60 percent of the area median (the current LIHTC maximum) so long as the overall property average was at that level. For example, there could be three units at 80 percent for every two at 30 percent (ELI). Such a mix would help generate the necessary cash flow.

The other AHCIA provision that hold promise for HTF development is a proposed 50 percent boost in eligible basis for ELI units. Having more basis means being able to generate additional LIHTCs, which enhances a property’s financial feasibility.

Conclusion
The HTF is a crucial tool in responding to the nation’s affordability crisis. While the program does face some implementation issues, they can be overcome by careful planning and execution by program administrators.