As illustrated in the chart, 2012 and 2011 LIHTC allocations are noticeably lower than 2010’s allocation level of $937 million. LIHTC Allocations in 2010 were substantially higher than 2012 and 2011 because a much larger aggregate amount of returned, carryover, national pool and Gulf Opportunity (GO) Zone and disaster recovery tax credits. 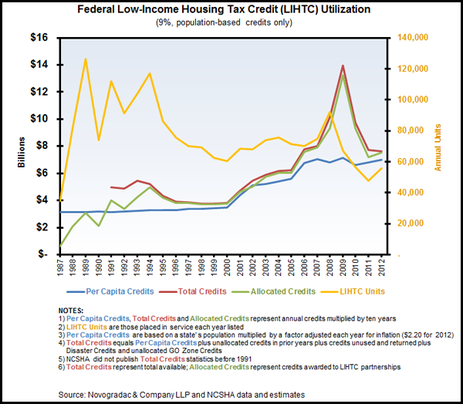 In terms of what this means for housing production, NCSHA reports that 2012 per capita LIHTC allocations supported the creation or preservation of 55,925 additional affordable rental housing units, which is 8.35 percent more than the 47,664 affordable rental housing units created or preserved by LIHTCs in 2011. It’s worth noting that in 2011, 9,361 units with LIHTC awards from earlier years also received an additional 2011 tax credit allocation. Similarly, 2010 saw 13,551 units with LIHTC awards from previous years receive 2010 allocations. Nonetheless, the number of affordable housing units created or preserved in 2012 nearly exceeded the 56,614 low-income rental units financed with LIHTCs in 2010. 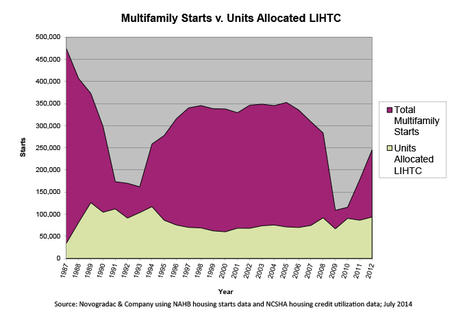 But the more significant trend is that the LIHTCs per unit ratio has declined significantly since 2010. By comparing total LIHTC allocations to total LIHTC units created or preserved, we find that in 2010 each unit was allocated an average of roughly $16,550 tax credits. In 2011, each LIHTC unit was allocated an average of roughly $15,100 credits. In 2012, the amount of tax credits allocated per LIHTC unit dropped to approximately $13,500. Between 2010 and 2012, the amount of tax credits allocated per LIHTC unit dropped about 18 percent. One factor that helps explain the decrease in LIHTCs allocated per affordable rental unit is the upward trend in tax credit equity pricing. As the equity pricing per credit increases for investors, developers can raise the equity they need with fewer credits. The average credit price, according to Novogradac & Company’s LIHTC pricing data, was around $0.71 in 2010, $0.84 in 2011 and $0.92 in 2012. This represents an increase of almost 23 percent equity prices for LIHTC between 2010 and 2012, indicating that the recovery in equity pricing (caused by a variety of factors, including increased economic growth after the Great Recession reviving tax appetite) helps explain the decline in credits allocated per unit.

The more level stream of tax-exempt bond utilization and housing production is due in part to the manner in which tax-exempt bond authority is allocated among various uses within a given state. As mentioned in the July 29, 2104 Tax Credit Tuesday podcast, three states generally make up about 70 percent of this market. To the extent tax-exempt bond allocations to rental housing remain fairly constant, the corresponding level affordable rental housing production will remain constant. It is also worth noting that the tax-exempt bond financing structure is more heavily influenced by market interest rates than a 9 percent LIHTC transaction is, and less influenced by tax credit equity pricing, because debt financing is the largest financing source in a tax-exempt bond transaction and tax credit equity plays an essential, though smaller proportionate role than in a 9 percent financing structure.