Nearly 73,000 Affordable Rental Homes Over a Decade Could be Financed with 30% LIHTC Rural Basis Boost Proposal

As many as 72,558 additional affordable rental homes in rural areas could be financed over 2022 through 2031 if a 30% rural basis boost was enacted for the low-income housing tax credit (LIHTC), according to Novogradac analysis. These homes would go a long way toward addressing the often-underappreciated need for affordable housing in rural communities.

In the United States, the affordable housing crisis is often portrayed as an urban issue where city and even suburban households are used to exemplify the country’s affordable housing supply and demand imbalance. Discussions about the lack of affordable rental housing often focus on the challenges in big metropolitan areas, especially on the coasts like New York City, San Francisco, Los Angeles and Boston, long known for their housing unaffordability.

While the cost of housing in rural areas may be comparatively lower than that in most urban areas, the low median incomes in rural communities make it very difficult to develop housing without significant subsidies. According to the recent release from Harvard University’s Joint Center for Housing Studies (JCHS), America Rental Housing 2022, though approximately 56% of rentals in rural areas rent for less than $600, median incomes in rural areas are less than in urban and suburban communities, resulting in rent burdens are often higher in rural areas. For example, 38% of rural renters were moderately cost burdened in 2019 and 19% were severely cost burdened. (A new Notes from Novogradac post details how all renters have fared.)

Research conducted by the U.S Department of Agriculture (USDA) Economic Research Service in 2020 shows that 80% of the nation’s high poverty counties are in rural areas, and such high poverty counties often have rental housing affordability challenges. This represents one out of every four rural counties, compared to one in 10 urban counties. Further, the 2021 edition of Rural America at a Glance, reported that 85% of persistent poverty counties were in non-metropolitan areas. JCHS found that the largest share of cost burdened rural renters (44%) could be found in the Northeast, followed by the West (39%), the South (38%) and the Midwest (37%). High construction costs, particularly in the Northeast, the cost of transporting materials to rural areas, challenges in finding skilled labor in rural communities, low median incomes in these rural areas, and the difficulties that raises for developers who want build there, makes it essential that provisions are enacted to make more development financially feasible. 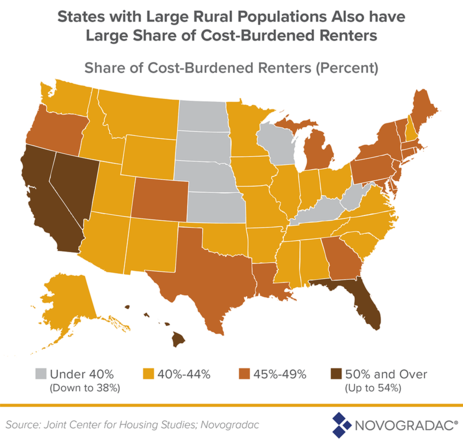 Targeted funding that keeps pace with increasing capital costs is needed to maintain the already limited rental housing options in rural areas, which is decreasing as homes deteriorate to the point of not being habitable and housing reaches the end of its affordability period. The condition of rural housing also often presents a problem as renters in rural areas are also more likely to live in substandard housing and have fewer rental options. A USDA study found that $5.6 billion will be needed for rural rental housing capital needs over the course of the next 20 years, in addition to existing capital reserves to cover capital costs of aging rental homes in their portfolio. Rural housing supply is also affected by the loss of federally assisted rural rental housing due to owners opting to leave the USDA Section 515 program.

Because it is so difficult to develop rural rental housing, it will take a number of measures working in tandem to make development feasible. The passage of the 4% LIHTC floor in December 2020 helps to enhance the feasibility of some rental housing in rural areas, but this is not enough. Low median incomes in rural areas and increased development costs in many rural markets makes it difficult to support debt and additional equity is needed. To ensure the financial feasibility of the developments, additional rural provisions are critical. The example pro forma below combines the effects of the already enacted 4% LIHTC floor, with a 30% rural basis boost. The analysis shows that 23% less equity is available without a rural basis boost. Potential developments in rural areas would be more financially feasible with the introduction of a targeted basis boost. 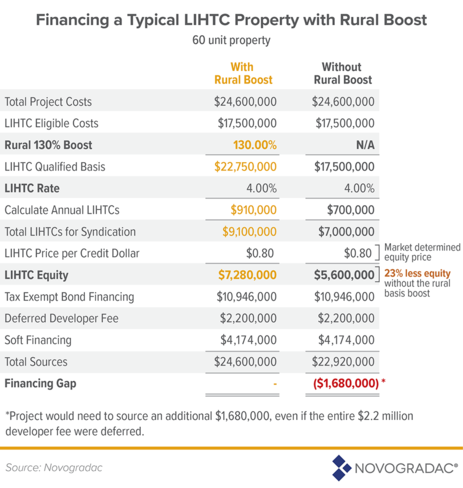 Section 520 of the Housing Act of 1949, which defines the eligibility of U.S. Department of Agriculture (USDA) rural housing programs, defines rural areas as non-metro counties and areas in metropolitan counties of a rural nature. The Office of Management and Budget’s (OMB’s) focuses rural areas just on non-metro counties; According to OMB, a metropolitan statistical area (MSA) is one where the core population threshold is greater than 50,000 and includes the counties whose residents have a clear economic relationship with that core population center. Where these two definitions do not overlap is OMB’s not accounting for rural portions of metropolitan areas. While OMB’s definition of non-metro is more restrictive, many do in fact use it as a proxy for rural; the Joint Center for Housing Studies (JCHS), whose research is quoted below, defined rural areas as nonmetropolitan places.

Renters in need of affordable housing options in rural communities are difficult to serve. Drilling down to even harder to serve households, a white paper released in December 2020 by Freddie Mac examined the use of the LIHTC in rural persistent poverty counties (PPC), those counties where low population density coupled with low income levels make it difficult to develop affordable housing. A low pool from which to select eligible renters could give investors pause when considering investing in rural developments given their fears that such properties may have trouble leasing up, even if there is a lack of affordable housing in the area. The Freddie Mac paper found that the LIHTC supported 40.1% of the multifamily rental housing market in rural PPCs, which is three times the national average and 1.5 times greater than its use in all rural areas.

The Sept. 10 version of the Build Back Better Act (BBBA) included a maximum 30% basis boost for properties in rural areas. That provision would have defined as nonmetropolitan counties and areas in metropolitan counties of a rural nature, as defined by section 520 of the Housing Act of 1949, which determines the eligibility of USDA rural housing programs. This provision would have been effective for buildings placed in service after Dec. 31, 2021 (section 135504 of reconciliation bill). At the time, the Joint Committee of Taxation scored the provision at more than $2.65 billion over 2022 through 2031.

A similar basis boost provision was also included in the Affordable Housing Credit Improvement Act (AHCIA) reintroduced April 2021 (H.R. 2573/S. 1136); the BBBA drew heavily from the AHCIA and as well as other previously introduced housing legislation.  The 2021 AHCIA includes two provisions specifically directed towards enhancing affordable rental housing production and feasibility as harder to reach communities need additional attention. These provisions were also included in previous versions of the AHCIA.

Standardize income eligibility for rural properties by conforming the income limit rule for tax-exempt bond-financed developments to that of allocated LIHTC to facilitate more rural LIHTC development. Measures to expand the LIHTC would provide benefits that reach all areas of the country, rural communities included. The following provisions of the BBBA from the Senate bill, would be complementary to efforts to support rental housing development in rural areas:

As part of its analysis of the BBBA, Novogradac estimated the Senate draft of the BBBA could finance 819,900 affordable rental homes over 2022 through 2031 as a result of the bill’s primary LIHTC unit financing provisions. This is in addition to the homes that would be financed through other provisions that are aimed at expanding the supply of affordable housing. It should be noted the basis boost provisions included in the reconciliation bill would expand upon existing boosts already allowed under current law. Novogradac’s analysis did not include a possible rural basis boost as this provision was removed from the more recent drafts, but were a 30% rural basis boost be enacted, Novogradac estimates it could finance 72,558 additional, affordable rental homes from 2022 through 2031.

Advocates continue to look for legislative vehicles to which measures to expand the LIHTC can be attached. Expanding the LIHTC in ways that would address the country’s 2 million rural renters and the unique challenges they face, is an important part of these efforts.

Though Congress is currently focusing its attention on near-term priorities, such as passing a fiscal year 2022 omnibus spending bill, discussions on BBBA continue behind the scenes.