The Rental Assistance Demonstration (RAD) program has “accomplished its principal statutory goals of leveraging private and other sources of capital, preserving affordable housing by addressing projects’ short-term capital needs and financial viability, and mitigating effects on tenants in terms of relocation.” according to an evaluation of the program released by Econometrica in partnership with the Urban Institute. The report delves into great detail about the first of two components that comprise the RAD program and discusses the financing of RAD developments, the performance of the property post-conversion, the effects of RAD on tenants, and more. The report also makes recommendations on how to improve the program.

Background of RAD and How it Works

Enacted by Congress in 2011, the RAD program was created to improve the public housing properties that were in need of serious repair by providing needed missing capital. The program has two components. Under RAD Component 1, public housing can be converted to project-based voucher (PBV) properties or project-based rental assistance (PBRA) programs. The report’s evaluation focuses solely on RAD Component 1. Conversion allows public housing agencies (PHAs) to address their immediate short-term capital needs so that housing can be preserved long-term, while protecting renters’ rights. PHAs can acquire capital by leveraging their property’s PBV or PBRA subsidies to finance debt and access other external funds, such as the low-income housing tax credit (LIHTC) equity. Currently, the RAD program is capped at 455,000 units. See the line graph below for visual representations of various trends since the program’s inceptions, including the HUD, number of units closed, and numbers currently in the rehabilitation process. 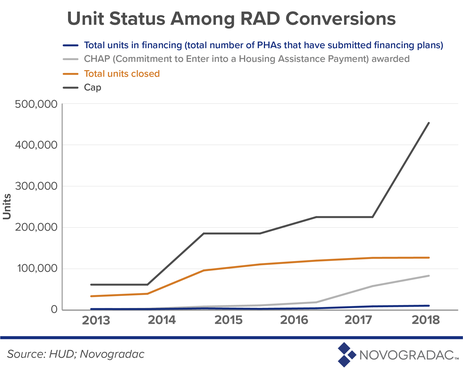 Some trends that are noted in this evaluation include the following:

How Does RAD Preserve Affordable Housing?

The Econometrica/Urban Institute  evaluation calculated that since 2012, 956 public housing conversions have been completed through October 2018. The RAD properties raised $12.6 billion in funding for 103,268 affordable housing units, which average $121,747 per unit. Costs per unit are expected to increase, as the first PHAs to participate in the program had more capital. PHAs that have more need for capital are beginning to participate in the program, so being aware of the different funding sources to use are instrumental for success for PHAs.  RAD conversions use a combination of funding sources, including LIHTC funding and public housing capital funds. See the pie chart below for a breakdown of how many funds came from the most popular sources of funding.

The report found that the RAD program is efficient in leveraging the funds. The ability to leverage additional funding beyond the amounts provided through HUD’s public housing program (which the evaluation calls “Public Housing Appropriated Funds”) can be demonstrated through their leverage ratios. See the chart below for the graphic demonstrating the leverage ratios for each funding source.

One frequently cited concern with the RAD program is that the program may force tenants to relocate. Most rehabilitation developments will involve relocation of some type and to make potential relocation easier for residents, RAD has implemented policies to mitigate the potential for harm imposed on tenants. To assess how the program affects tenants overall, the evaluation team surveyed the tenants of 19 RAD properties on a variety of issues. Through these 19 RAD properties, the evaluation team was able to study large, medium, and small sized PHAs. A total of 298 tenants completed the survey. Out of all respondents, 82 percent remained in the same property throughout the conversion process. Post-conversion, 75 percent were back in their original unit, and 92 percent were in the original property.

The RAD program serves vulnerable populations (very low-income residents, disabled residents, and seniors), and because of this, the conversion process’ effects on resident health was measured. The redevelopment and potential relocations has the potential to affect resident’s health and well-being. Certain aspects of the program where many PHAs felt they excelled included installing new accessibility features for people with disabilities and the remediation of certain health hazards, such as the elimination of lead-based paint and asbestos hazards. Some of the other property qualities the PHAs were able to address include, but are not limited to:

Feelings of safety were also measured. Most respondents did not feel that there was an overall change in safety since before RAD. However, of those that felt there was a change, 22 percent felt safer, and only approximately 12 percent felt less safe.

This evaluation of the RAD program demonstrates the strengths of the program such as the creativity available in financing the properties, and the relief from public housing regulations. The evaluation also demonstrates that the RAD program is working efficiently and effectively to preserve and improve affordable homes. Although more than half of RAD conversions use LIHTC, it is a financing tool that all PHA’s could benefit from, especially if they learn how to avoid the potential pitfalls of RAD.

Those interested in using RAD should keep special track of the Affordable Housing Credit Improvement Act (AHCIA), as passage of this bill would have serious implications on the RAD program. Certain provisions of the AHCIA have been enacted, such as the average income tests, which has already been benefitting RAD deals. Other provisions in the AHCIA that would benefit RAD deals include the basis boost for serving extremely low-income households. This boost and others (such as the basis boost to bond investments) would improve the financial feasibility of bond-financed developments, as it would enable RAD properties to have greater equity.  This greater equity is critical, as it allows the properties to better serve extremely low-income households as their incomes are too low to cover debt service. These basis boost provisions would especially help some of the larger urban PHAs that historically struggle to raise enough capital to rehabilitate the oftentimes severely distressed housing. The proposed minimum 4 percent rate would bring in substantially higher amounts of equity. More than two-thirds of RAD properties using LIHTC financing are completed as 4 percent deals. These provisions are just another reason why the AHCIA should be passed - to help the RAD program become even more efficient in affordable housing preservation.