In 2020, the nation’s 11 Federal Home Loan Banks (FHLBanks) helped house about 40,000 low-income and moderate-income households, including about 21,600 very low-income households through the distribution of about $392.7 million in Affordable Housing Program (AHP) funds.

According to the Federal Housing Finance Agency’s (FHFA’s) report on 2020 activities, the 2020 Low-Income Housing and Community Development Activities of the Federal Home Loan Banks, the amount of AHP funds the FHLBanks distributed in 2020 was 14% lower than the previous year because the banks had received lower smaller net earnings compared to 2019.

The Housing and Economic Recovery Act of 2008 established the FHFA, which oversees the 11 FHLBanks. AHPs are required by each member bank under the Federal Home Loan Bank Act and these banks must set aside 10% of their net earnings for their AHP. The AHPs are funded through these set-aside net earnings from the preceding year. Since there was a decrease in overall net earnings in 2019, there were fewer funds for 2020’s AHPs, thus resulting in less overall investment. These funds can be used for the construction, purchase, and/or rehabilitation of owner-occupied housing or affordable rental housing.

The FHLBanks offer two programs: the mandatory Competitive Application and the discretionary Homeownership Set-Aside Program. The former provides grants or advances to member institutions, but mostly grants, with a reduced interest rate and the latter gives grants to low-income households looking to purchase a home. After receiving these funds in the set-aside program, these households can use these funds for a variety of related costs, including down payments, closing costs, counseling, or for rehabilitating the home they purchased.

CIP is a statutorily required program mandated by the Federal Home Loan Bank Act while CICA is a voluntary program. Data from this report and from other recent reports show that investment in CIP is falling while that in CICA is rising. 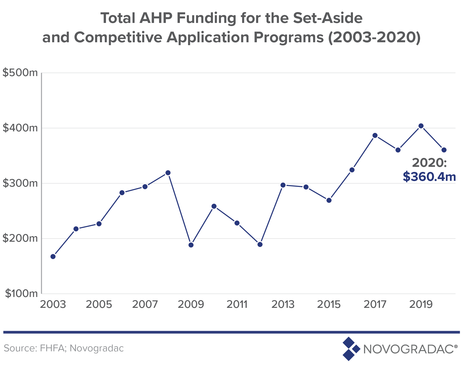 In 2020, the FHLBanks disbursed about $392.7 million AHP funds. Again, this was 14% lower than the previous year. These funds had a significant impact. They helped house about 40,000 low-income and moderate-income households, including about 21,600 very low-income households. Under the AHP, the total funding given for the competitive application programs was $291.7 million and the total funding for the set-aside programs was $101 million. Both of these funds supported 40,399 housing units.

The graph below details the amount of AHP funds each FHLBank awarded in 2020.

Overall, FHLBanks’ AHP funding decreased from 2020 compared to 2019. Since 1990, the overall funding for AHP has been trending upwards with various peaks and valleys. One of the largest valleys in the data was between 2008-2009. 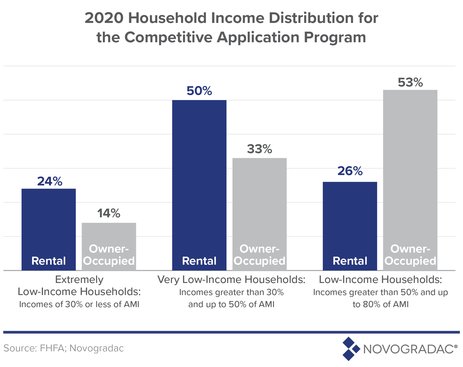 More than 50% of the 251 AHP-assisted developments also received the low-income housing tax credit (LIHTC). Figure 1 below shows the number of developments that received other forms of federal housing funding along with AHP funds. Combining different federal housing programs will give developers more incentives to build and rehabilitate more affordable housing, thus increasing its supply to better meet the demand.

Though commitments have been uneven, CIP and CICA funnel millions into housing developments

While CIP is statutorily required, fewer FHLBanks participate in this program compared to CICA and this has been an ongoing trend. This is, in part, due to CICA having less restrictive income requirements for their developments compared to CIP. The banks’ commitments to economic development projects through CIP decreased from $90.5 million in 2019 to $43.8 million in 2020. CIP housing funding also decreased by $372 million, to approximately $2.9 billion in 2020, compared to 2019. While the report did not give any specific reasons for these large decreases, it stated that the decreases may be due to changing community needs in the banks’ districts and changing broad economic dynamics. However, CIP letters of credit increased to $473.4 million in 2020 compared to $294.7 in 2019.

While CICA is voluntary, participation in this program grew in 2020 from 2019. The advancements this program gives out can be used for housing developments, mixed-use projects, and for economic development. The grants CICA gave out for these different types of developments totaled $8.1 million, which was slightly less than in 2019. CICA also offers letters of credit, but their letters of credit decreased from $18.5 million in 2019 to $12.1 million in 2020. CICA funded projects mostly focus on economic development.

The AHP, CIP and CICA programs are all important for increasing the amount of affordable housing available and for investing in community development initiatives. In May, Rep. Ritchie Torres, D-New York, and Sen. Catherine Cortez Masto, D-Nevada, introduced legislation that would increase the banks’ ability to support affordable housing. This legislation, known as the Federal Home Loan Banks’ Mission Implementation Act (S. 1684, H.R. 3323), would double FHLBanks’ AHP investments if passed. It would also let the FHLBanks give advances secured by the loans that are guaranteed by the Small Business Administration and loans given out to mitigate the effects of COVID-19 would be insured or guaranteed by the federal government.

The latest version of the Build Back Better Act (BBBA), if passed, would require the FHLBanks to allocate 15% of their net annual income for the AHP from 2022-2027 instead of the current 10%. This, along with the LIHTC, private activity bonds, and housing spending proposals will help address the affordable housing crisis by financing more than 1 million affordable homes to low-income families. The BBBA would be a vehicle for the passing a version of the Federal Home Loan Banks’ Mission Implementation Act. At the time of this writing, the BBBA was pending in the House, but appeared to have a good chance of passing and being considered in the Senate. It is unclear whether the proposal will remain in legislation once evaluated for compliance with the Byrd Rule.

What You Need to Know About 2022 DDAs and QCTs
Tax Credit Equity Pricing– What Does the Future Hold?
WHEDA Aims to Boost Social Equity Across Wisconsin with New Strategic Market, Tribal Liaison
END_OF_DOCUMENT_TOKEN_TO_BE_REPLACED