Yesterday, a bipartisan, bicameral  group of lawmakers introduced legislation to make permanent the 9 percent tax credit percentage floor for the low-income housing tax credit (LIHTC) as originally but temporarily authorized by the Housing and Economic Recovery Act of 2008 (HERA). The legislation would also extend the same policy to 4 percent allocated housing tax credits (but not 4 percent LIHTCs generated by tax-exempt bond financing).

The current 9 percent LIHTC floor expires for developments placed in service after December 30, 2013. However, because properties financed with housing tax credits generally take up to two years to develop, many investors, syndicators, and state allocating agencies will likely need to underwrite allocations using the floating rate starting in 2012; for December 2011 that floating rate is 7.47 percent, that is 17 percent less than the 9 percent rate.  For developments that have no excess eligible basis at the 9 percent floor rate, this would translate into a 17 percent loss in tax credit equity! (See the calculation below, highlighting the loss in equity at a 7.25 percent credit percentage and $0.83 credit price.) 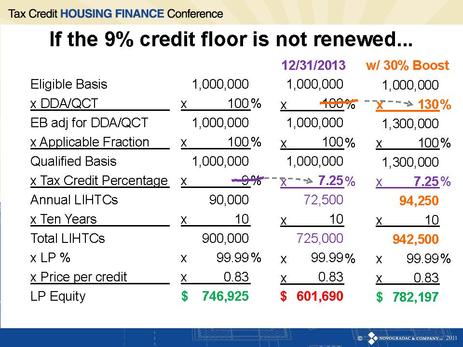 The significance of the 17 percent reduction in credit percentage and corresponding tax credit equity is exacerbated by the deep cuts Congress has already made to gap financing sources for affordable housing.  Allowing this provision to expire would be an even more damaging blow to this crucial source of funding for the creation of affordable housing for the nation’s workforce, as well as its seniors and disabled citizens.

Now that the legislation has been introduced the affordable housing supporters’ next goal is to secure as many cosponsors for the proposal as possible in the House and Senate. The best way to do that is often to contact your federal representatives and seek their support for this proposal and the LIHTC in general. For this proposal to gain momentum, it’s essential for industry practitioners to participate in these efforts. There are several tools available to assist the affordable housing community in promoting and supporting the housing tax credit, such as the Housing Advisory Group’s advocacy toolkit.