Some believe the affordable housing crisis is an urban or even inner-city problem, but new research from the Housing Assistance Council (HAC) highlights the fact that there is a crisis in rural America as much as there is for urban American. Furthermore, HAC’s research shows that not only has the low-income housing tax credit (LIHTC) proven instrumental in creating affordable housing but it has also created this housing in rural parts of the country where the need for such housing is greater than many imagine.

With the release of HAC’s report Rental Housing For a 21st Century Rural America: A Platform for Preservation, yet more evidence is provided that illustrates the LIHTC’s ability to provide housing in varied communities. Providing affordable rental housing in major cities like New York, Boston or San Francisco often dominates the conversation but rural communities not only suffer from the lack of affordable housing but the housing they do have is often older and in poor condition, exacerbating the need for recapitalization or new construction to replace obsolete housing. Add to this the economic challenges faced by these areas and addressing their affordable housing needs becomes that much more difficult. To shed light on the issues facing rural America, HAC examined the U.S. Department of Agriculture’s (USDA) portfolio of multifamily rental housing.

Since its inception in 1986 the LIHTC has funded the creation and rehabilitation of more than 3 million affordable rental homes and is the major source of financing for affordable rental housing nationwide. Not surprisingly, the HAC report found that nearly half the units in the USDA’s Section 515 housing portfolio are LIHTC-financed. The percentage of Section 515 units with LIHTCs rises to approximately 73 percent when looking at 515 units created after 1988. 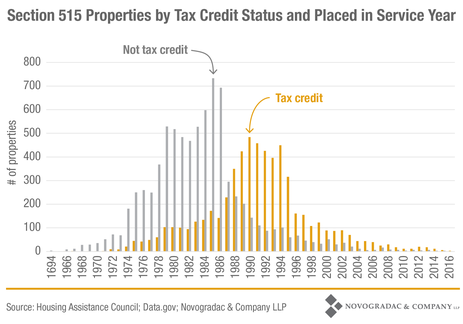 To understand the significance of the impact of the LIHTC one must know where Section 515 housing is located and whom it serves. Section 515 properties can be found in 87 percent of all U.S. counties and is predominantly located in the South and Midwest regions of the country. As the name implies, three-fourths of all USDA properties are located in rural and small town areas with urban and suburban areas make up the remaining 25 percent. The report also found that the tenancy in rural LIHTC-financed homes was more varied than that of all units, with higher percentages of single-parent households, seniors, people with disabilities and minors, the very type of households in most need of housing assistance. The average annual income of tenants in Section 515 rentals is just $13,600 and 80 percent of tenants receive some form of rental assistance.

Among other available tools like rental assistance, the report stresses the importance of the LIHTC in meeting rural housing needs. The preservation of affordable rural rental housing is particularly important. Not only has USDA funding of new Section 515 properties dropped to zero in recent years, the program is losing units—there has been a 7 percent decline in the number of Section 515 properties since 2006. Then there are the properties with mortgages nearing maturity that can choose to opt out of the program once the mortgage is paid off. HAC projections estimate that 74 properties per year (1,788 homes annually) from 2016 to 2027 will leave the program. Couple the loss of affordable homes with the market conditions in which affordable housing stakeholders must operate now, and repeated attempts by the administration to cut USDA and HUD funding to programs and agencies that provide or support affordable housing efforts, and the LIHTC is more important than ever.

There is no argument that the preservation of existing rural housing is essential, but the HAC report also speaks to the need for new construction to address the affordable housing needs of rural America. At its peak, the Section 515 program financed nearly 30,000 affordable rental units per year, but as mentioned above, there have not been any Section 515-financed new construction units in years. The Section 538 program, which offers shorter-term loans at market interest rates, can be used for rural construction but rents at these properties are often higher than what would be affordable to lower-income rural households.  As in other parts of the country, the lack of other financing options means the LIHTC will be instrumental in financing new, affordable rural rental housing.

While the report does point out the difficulty of obtaining credits and the stiff competition faced, even going as far as to state that in a perfect world cheaper financing may be preferable to tax credit equity, the fact still remains that there is no other funding source that is as plentiful or as successful as the LIHTC in financing affordable rental housing. No program is perfect and there are steps outlined in the report for making the LIHTC even more responsive to the needs of rural states’ affordable housing needs. The authors highlight states that have set aside LIHTCs for preservation efforts and suggests more can be done on this front. Also, provisions of the Affordable Housing Credit Improvement Act—such as the standardizing rural income limits and encouraging housing development in Native American communities—would make it even easier for the LIHTC to address rural housing and preservation needs. In the end, the LIHTC is a powerful tool in the arsenal of affordable housing stakeholders and advocates that must be preserved and strengthened to address the housing needs of communities located throughout the country.