NMTC CY 2020 Allocations Include Most First-Timers, Highest Average Award Since 2015-2016 Round 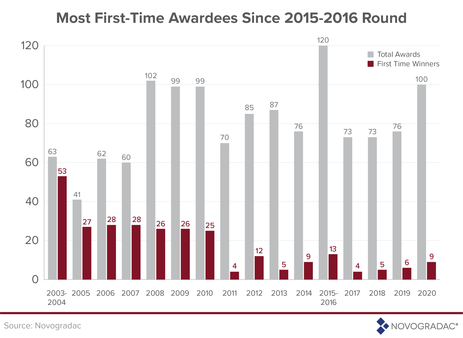 The CY 2020 round was the first of at least six-consecutive $5 billion rounds, the next five made possible by legislation late in 2020 that extended and expanded the NMTC. With an additional $1.5 billion in allocation authority (since 2010, rounds have generally been $3.5 billion, with the exception of the combined $7 billion 2015-2016 round), the CDFI Fund awarded allocation authority to 24 more CDEs than in the CY 2019 round.

The 48.1% success rate among the 208 applicants (who requested approximately $15.1 billion in allocation authority) was also higher than the past three years, when the success rate varied between 31.8% and 36.9%. The increase in the success rate is largely due to the CDFI Fund maintaining a similar average award size as prior rounds even though there was $1.5 billion more in allocation authority available.  This seems to corroborate what the CDFI Fund has been saying over the past couple of years about how competitive the applications have become and that more and more are highly qualified. It’s likely that fractions of a point in the scoring process can be the difference between winning an award and being left out.

The CDFI Fund’s NMTC Program Award Book for the allocation round provides some other highlights:

With every $1 invested in the NMTC program generating more than $8 of private investment, the NMTC remains a crucial incentive for development in low-income communities. Through the CY 2020 round, the CDFI Fund has made 1,354 allocations with $66 billion in tax credit authority.

Highlights of the CY 2020 allocation round are the focus of the Sept. 7 Tax Credit Tuesday podcast. The CY 2020 allocation and other issues concerning the NMTC world will discussed at the Novogradac 2021 Fall New Markets Tax Credit Conference, Oct. 28-29 in Austin, Texas. The CY 2021 application round is expected to open soon and the Novogradac Top 10 Tips to Gain an Advantage in the Upcoming $5B NMTC Round webinar is available on demand.

Novogradac Top 10 Tips to Gain an Advantage in Upcoming $5B NMTC Round Webinar
June 18, 2020
More Information >>