NMTC Demand in 12th Round Exceeds Supply by Nearly 4:1

Here’s a look at how this round’s demand compares to the historical NMTC applications and allocations: 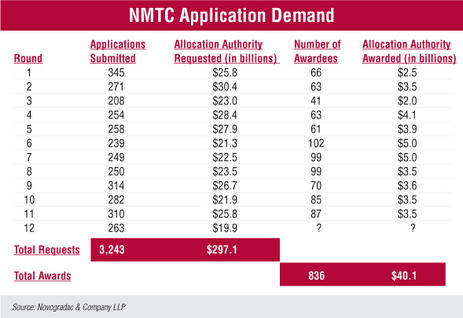 While demand for the 12th round is appears lower than that for the 11th round, this is in part because the 11th round was originally opened as a combined allocation application round for calendar years 2013 and 2014 for as much as $8.5 billion in allocation authority, pending congressional approval. Demand in the 11th round at the time of the application deadline outstripped supply by a ratio of 3 to 1.

Because Congress only extended the NMTC for 2013, a new NOAA was issued for the calendar year 2014 round for which as much as $5 billion in allocation authority will be awarded, pending congressional approval. Demand for the 12th round exceeds supply by nearly 4 to 1.

To prepare for the next NMTC allocation round, join us at the Novogradac New Markets Tax Credit Conference on Oct. 23-24 in New Orleans.