No More “More of the Same”: Exploring a New Proposal to Address Housing Underproduction

While federal support through Congressional action is vital, a new report also draws attention to the importance of state and local governments taking action on the country’s affordable housing crisis. Up for Growth, a nonprofit organization working to tackle the housing crisis through data-driven research and evidence-based policies, offers a solution in its recently released report, Housing Underproduction in the United States 2022. The report highlights A Better Foundation, a framework developed based on a new way of addressing the nation’s housing supply problems.

The Up for Growth researchers reported there was a deficit of 3.8 million homes in the United States in 2019, compared to 1.65 million homes in 2012. By breaking down the housing deficit by metropolitan regions, the framework seeks to provide local stakeholders with the tools needed to make decisions that not only address the housing deficits in their communities, but also generate better financial outcomes for their cities and towns. Its supporters say the Better Foundation framework aims to reverse systemic policies that perpetuate housing unaffordability, exacerbate racial disparities and create inequitable access to economic opportunities.

What Makes Up for Growth’s Plan Unique?

The researchers attribute the nation’s housing crisis to exclusionary and discriminatory land-use and zoning policies that artificially restrict housing production at the local level. They say a host of policies and practices–a preference for single-family detached zoning, minimum lot size requirements, unpredictable and lengthy permitting processes–limit the availability and affordability of homes in high-opportunity neighborhoods, places usually rich in jobs, transportation, infrastructure and community assets, based on the report. While these factors affect everyone, they are particularly burdensome for working families, low-income and Black, Indigenous and people of color (BIPOC) households.

The proposed framework offers a solution to the nation’s “more of the same” policies and practices. Proponents say the framework will address the housing crisis by not outwardly expanding housing across geographical regions, but rather increasing housing availability within existing spaces and places. This would be accomplished by identifying the best locations to build housing, appropriate density increases for each site and determining the optimal housing mix in each area. Up for Growth also emphasizes opportunity mapping, a process by which areas considered to have economic opportunity, community assets and social networks are identified, along with segregation analysis that shows how households may be prevented from accessing these areas. Up for Growth says a Better Foundation framework used in conjunction with opportunity mapping, can propose new housing based on where it is most socially, economically, fiscally and environmentally beneficial for jurisdictions to create more homes.

Besides building enough housing to address the 3.8-million-unit nationwide shortfall, Up for Growth’s analysis suggests this increase in production could mean a $209 billion increase in the gross domestic product nationally versus the more of the same approach. They say use of the framework could also produce $250 million in additional state and local revenues, and $110 million more in federal revenue than methods currently employed, resulting in as much as $4.3 billion in approximately 30 years.

It should be noted that the “more of the same” hypothetical assumption, consistent with existing policies and past patterns, used by the authors as a comparison to their new framework both produce the same type and number of homes. Both options produce single family-detached, missing middle, medium-density and high-density homes. Up for Growth says the difference is that A Better Foundation promotes more missing middle and moderate-density housing, as these housing types are less expensive to build and provide more affordable housing options. Also, A Better Foundation focuses on building in areas with better access to necessities to reduce household costs, which together with the economic benefits enumerated above, provides local decision makers with a framework that goes beyond just addressing housing shortages in their eyes.

Underproduction is More Than Just a Housing Issue

Rising inflation and historically high rents, coupled with the expiration of federal COVID-19 relief protections and direct payments, which helped households cover housing and other costs throughout the pandemic, could lead to increased housing insecurity. In its 2022 State of the Nation’s Housing, Harvard’s Joint Center for Housing Studies (JCHS) reported on complex housing challenges many lower-income households face, including being cost-burdened, which is when a household spends 30% or more of their income on housing costs, possibly causing them to forego other necessities. These factors leave lower-income households vulnerable, raising housing insecurity fears, including the possibility of homelessness. This housing insecurity is evidenced by the first substantial increase in the last 10 years in housing cost burdens. Nearly one-third of all households were cost burdened in 2020, according to JCHS. Included in that number are the 14% of households that are severely cost-burdened, paying more than 50% of their income towards housing costs. Lower-income households, renters and BIPOC households are disproportionally represented among the ranks of cost burdened Americans. It is these households that Up for Growth hopes to assist with its new framework.

Up for Growth researchers note that housing issues are also economic, social and environmental issues. For instance, limited access to housing could make for longer commutes to work, school and needed services, which has a negative impact on the environment. On a larger scale, as these housing-related issues persist, they will play a significant role in rising inflation. Housing accounts for more than one-third of the market basket of goods and services the Bureau of Labor Statistics uses for the Consumer Price Index, a key component in the inflation calculations. Inflation has been a constant topic of conversation during recent congressional hearings, with members acknowledging the need to quickly address housing in order to contain inflation. These interconnected challenges created by an affordable housing deficit can lead to a lower quality of life for lower-income households, increased environmental harm and larger economic issues.

By Any Measure, the Country Faces a Housing Supply Crisis

Annual housing underproduction increased from 1.65 million in 2012 to 3.79 million in 2019, according to Up for Growth’s analysis. Up for Growth calculates underproduction by taking the difference between the target number of housing units for a location (total of households and missing households, defined in the report as households that may not have formed due to lack of availability and affordability) minus the units that are renter- or owner-occupied (total housing units minus second and vacation homes and uninhabitable homes). 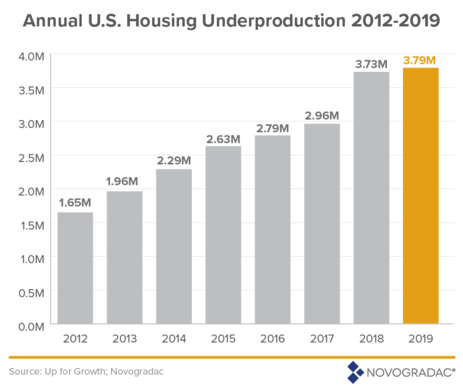 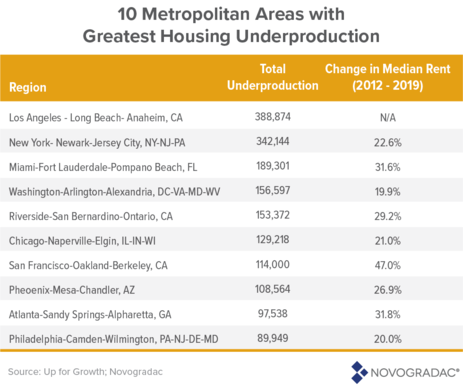 In the graphics below, those metropolitan areas with positive production numbers indicate that enough, or even a surplus, of housing was available. Merced, California, and Bend, Oregon, for instance, each went from having a surplus of housing in 2012 to having some of the largest housing deficits in 2019. 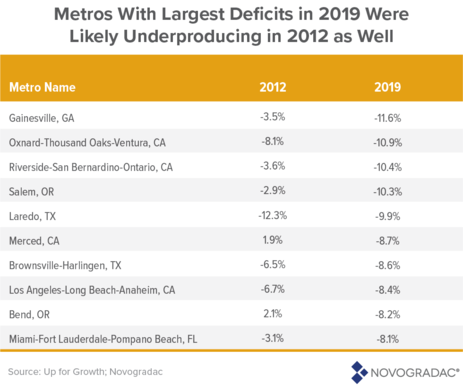 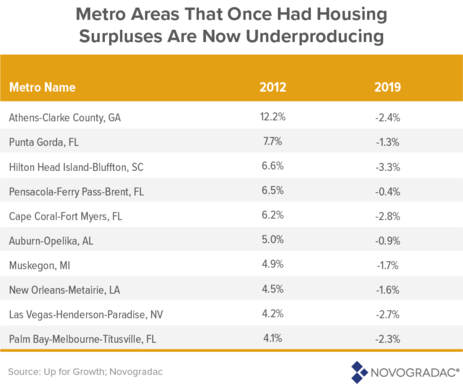 Up for Growth details its methodology and explains that if any region in a state was found to be underproducing housing, then that state is considered to have an underproduction problem. It explains that examining the problem of underproduction on a sub-state level provides a more accurate assessment as housing markets within a state behave differently and could require different solutions. The shortfalls in supply were fueled by uninhabitable units, a lack of new housing creation and a lack of household formation (these are considered missing households and they are considered when figuring the total number of homes needed) in many cities and towns. Up for Growth found that 47 states and the District of Columbia are considered underproduced, with California having the largest deficit.

Another oft-cited source of housing supply need is the National Low Income Housing Coalition’s (NLIHC’s) annual report The Gap: A Shortage of Affordable Housing. This report quantified the shortfall in homes that were affordable and available to renter households, finding extremely low-income renters, households with incomes that are at or below the poverty guideline or 30% of their area median income, have the most difficulty finding housing they can afford. The 2022 report found a deficit of 7 million rental homes affordable and available to extremely low-income renter households, nearly double the 3.8 million underproduction figure reported by Up for Growth. While NLIHC focuses on the housing needs of renter households, especially the lowest income households, Up for Growth is looking at the entirety of housing need for renters and owners at all income levels, which include a much larger universe of households than the lowest income renter households. Another difference between the two reports is that the NLIHC looks beyond the need for physical units to the affordability and availability of rental housing for the neediest households. Further, Up for Growth focuses on the construction of new housing and, through its proposed framework, how localities can better tackle their underproduction issues.

Reform and Congressional Action are Required Under New Plan

Addressing housing underproduction could deliver tangible economic and fiscal benefits, not only for individuals by increasing access to homes and jobs, and services and amenities, but also for the broader economy at the local, state and federal levels because of significant fiscal advantages through taxable personal income and reductions in infrastructure maintenance and operating expenses.

Beyond its sizeable negative impact on overall economic output, housing underproduction is also found to lock in geographic inequality through exclusionary housing policies. Up for Growth, in detailing these issues, says it’s time to try something new. Its A Better Foundation framework, coupled with regional-level data, provides quantifiable insight into how complex the United States’ housing needs are and informs policymakers on how to productively address these issues in new and productive ways. Up for Growth notes that its A Better Foundation framework allows flexibility when addressing housing because each community is unique and the framework could reveal many inequities that exist within community policies that several stakeholders never knew existed. Proponents say implementing of A Better Foundation could improve the personal income of Americans by $111 billion over 30 years of consistent housing production, potentially resulting in widespread, positive outcomes throughout the nation.

Though Up for Growth’s analysis has shown that underproduction has worsened over 2012 to 2019, the good news is that the housing crisis has attracted increasing national attention. Proposals to increase housing production have been included in major legislation and been the topic of recent congressional hearings. Expanding the low-income housing tax credit (LIHTC) and enacting the Neighborhood Homes Investment Act, which would create a neighborhood homes tax credit (NHTC) to help finance more affordable owner-occupied housing in distressed communities, were included in the reconciliation bill formerly known as the Build Back Better Act passed by the House last fall, and both tax incentives were praised during recent hearings on housing convened by the House Ways and Means Committee and the Senate Finance Committee.

With the status of the reconciliation bill uncertain, the attention being paid to housing by the tax-writing committees in Congress hopefully means the LIHTC and NHTC proposals could find their way into year-end tax legislation. The recent release of President Biden’s Housing Action Plan, shows the administration still considers housing supply and affordability issues to be priorities. Reports like Up for Growth’s add to the already substantial body of research and helps to keep the spotlight on the severity of the nation’s housing crisis, calling for swift action from all levels of government.

Help Rewriting QAPs Provides Opportunity for Clarity, Simplification
Rising Stars: Novogradac Spotlights Younger Leaders in Community Development
ESG Investing: Where it is Now; Where it’s Headed; What to Do
END_OF_DOCUMENT_TOKEN_TO_BE_REPLACED