Based on the U.S. Securities and Exchange Commission (SEC) 2020 filings of Fannie Mae and Freddie Mac released this week, Novogradac estimates that 2021 allocations for the Housing Trust Fund (HTF) and Capital Magnet Fund (CMF) will total more than $1 billion, more than doubling the allocations from 2020.

The Federal Housing Finance Agency (FHFA) is expected to transfer 65% of this amount, nearly $690 million, to the U.S. Department of Housing and Urban Development (HUD) for the HTF, and 35%, about $370 million[KD1]  to the Department of the Treasury’s Community Development Financial Institutions (CDFI) Fund for the CMF by March 1. On Feb. 27, 2020, FHFA released $327 million to HUD for the HTF and $176 million to the CDFI Fund for CMF.

Why the major increase? The SEC’s filings of Fannie Mae and Freddie Mac indicate they purchased nearly $2.5 trillion in single-family mortgages for the year, nearly two-and-a-half times the slightly more than $1 trillion they purchased in 2019. This is because households that did not suffer from job loss due to the COVID-19 pandemic purchased single-family homes and refinanced their single-family mortgages in record numbers, given the historically low interest rates. Mortgage refinancing volume was particularly notable. Of Fannie’s $1.4 trillion in 2020 single family purchases, nearly $950 billion was for refinanced loans.

Housing government sponsored entities (GSEs) Fannie Mae and Freddie Mac are required annually by the Housing and Economic Recovery Act (HERA) of 2008 to contribute to the HTF and CMF. The GSEs’ annual contributions to the HTF and CMF are based on 4.2 basis points of annual new business purchases. HTF allocations specifically address housing for very low-income households, and when the overall available amount is less than $1 billion, funding is reserved for extremely low-income households (households earning no more than the greater of 30% of the area median income or the federal poverty line). HUD is expected to announce HTF allocations to states by around April 1.

HUD distributes HTF funds based on the HTF specific formula measuring the need for affordable housing of the lowest income households to each of the 50 states, Washington, D.C., and U.S. territories. Once states have received their HTF allocations, such funds will be distributed to recipients according to each state’s HTF allocation plan, likely in the second half of 2021.

CMF allocations finance the preservation, rehabilitation, development or purchase of affordable rental housing or owner-occupied housing for low-income populations and communities as well as up to 30% for economic development and community services facilities like workforce development centers and health care clinics developed in conjunction with the affordable housing. The CDFI Fund holds a competition among affordable housing developers and CDFIs annually for its distribution of CMF funding. We expect CMF awards from the 2020 round to be announced soon. 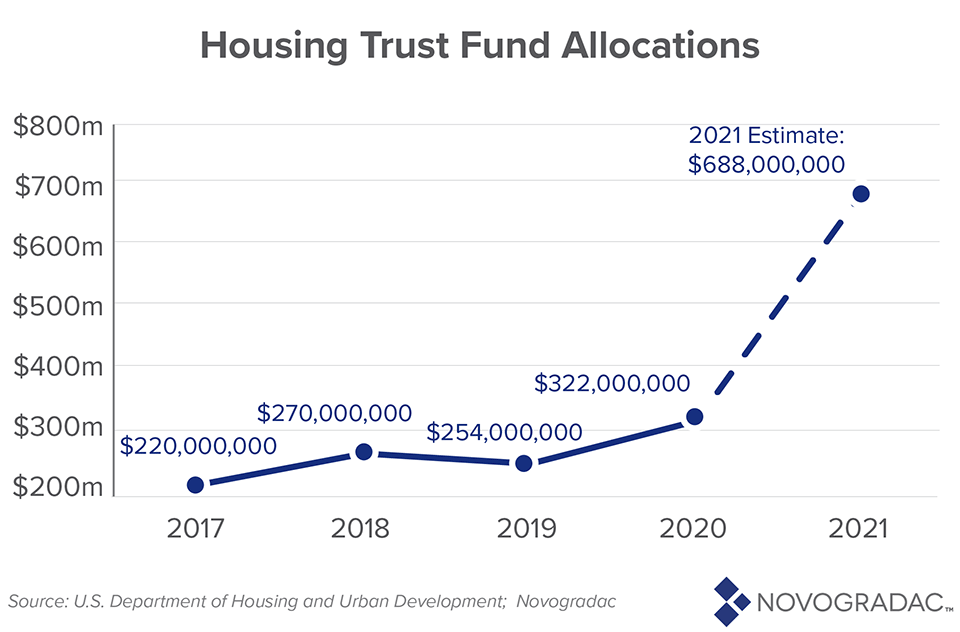 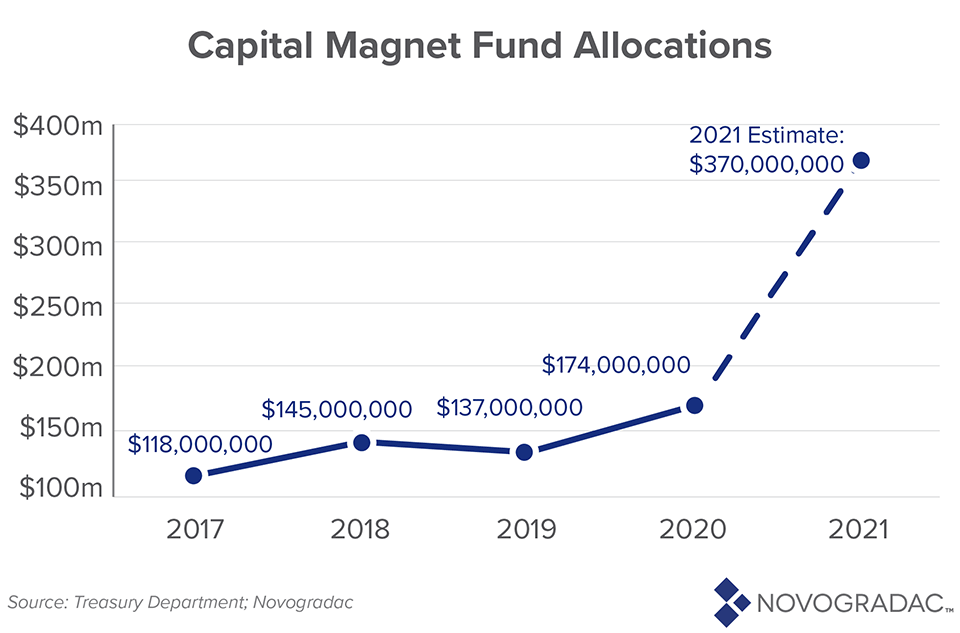