Just as the nation was beginning to recognize the toll the COVID-19 pandemic would take, investment in qualified opportunity funds (QOFs) reached a notable fundraising milestone. This is good news, as opportunity zones (OZs) are an economic tool poised to play a key role in post-pandemic recovery.

Investment in QOFs tracked on the Novogradac Opportunity Funds List has surpassed $10 billion–and the total invested in all QOFs is likely significantly more than that. Nearly all of the $10 billion-plus was raised before March 13, the date President Donald Trump declared a national emergency to combat the spread of COVID-19 in the U.S. Anecdotal evidence since March 13 suggests QOFs are seeing a pause in new investment as the nation struggles to react to the pandemic.

“We’ve never seen what we’re seeing now,” said John Lettieri, president and CEO of Economic Innovation Group, a bipartisan public policy organization that champions the use of the OZ incentive. “It’s hard to see past it, but when [the pandemic] ends, there’s a number of reasons investors might look to opportunity zones to help rebuild the economy by investing in areas that need it most.”

Lettieri cited the tax advantages of OZ investment, an expected investment in construction and the fact that there is an opportunity to invest in OZs at a time of low prices.

Steve Glickman, co-founder of EIG and now the CEO of leading OZ advisory firm Develop LLC, agreed. Glickman cited the prevalence of distressed assets in OZs, a downward pressure on construction prices, a low interest-rate environment and a lack of other attractive investment options.

“All those things will conspire to create an interesting next 18 months or so,” Glickman said. 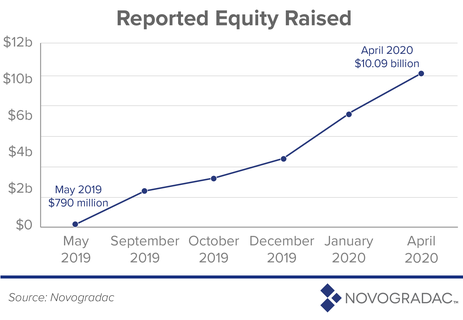 Funds on the Novogradac Opportunity Funds List report having raised $10.09 billion. That is an increase of $3.37 billion (50 percent) over the $6.72 billion reported in early January–and continues a steady increase in equity reported raised since Novogradac began tracking investment activity 11 months ago.

Some of the anecdotal evidence of a slowdown in investments in QOFs since the national emergency declaration may be due to the difficulty of completing investments while in the midst of social distancing interventions. To help address the difficulty of investing during a pandemic, the IRS included in Notice 2020-23 issued April 10, guidance that allows taxpayers a 180-day capital gains OZ investment deadline of July 15 if their investment deadline falls on or after April 1 and before July 15. Many in the OZ community welcomed the extension, but sought a more flexible extension period, along with other OZ-related COVID-19 pandemic tax relief. The Opportunity Zones Working Group sent a letter to Treasury seeking extensions and regulatory changes to help investors, QOFs and qualified OZ businesses deal with the challenges presented by COVID-19, as did the Economic Innovation Group.

Investment in the QOFs on Novogradac’s list continues to grow.

The information for the rolling survey comes from QOFs voluntarily providing information or from other public sources, including press releases. The Novogradac list doesn’t include proprietary or private funds owned and managed by their principal investors. 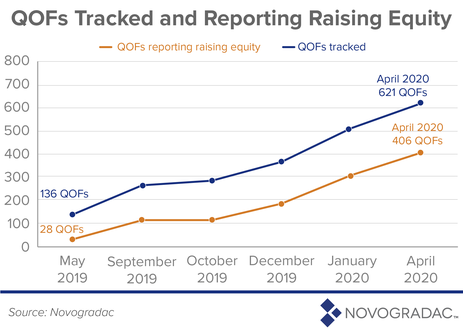 The number of QOFs on the list grew from 502 in January to 621 and the number of QOFs that reported the amount of equity they have raised increased from 292 to 406. The average equity raise for those QOFs is $24.9 million. Twenty-two of the QOFs report having raised at least $100 million, an increase from 12 in December 2019.

The total raised by QOFs is undoubtedly higher than the reported $10.09 billion, because the Opportunity Funds List is a voluntary rolling survey and many QOFs being tracked haven’t revealed their fundraising levels. There are also QOFs that are not part of the survey, as well as private QOFs formed by high-net-worth individuals, corporations and others. It’s reasonable to estimate that the actual dollars raised to date are double or triple $10.09 billion.

That’s significant because the federal government’s original estimates were that OZs would attract roughly a combined $10 billion to $13 billion for the two years, 2018 and 2019. OZ investment has clearly exceed original expectations.

How will the pandemic affect future investment? The COVID-19 pandemic resulted in broad shelter-in-place orders by late March, leading to significant drops in the stock market, record unemployment and a unique slowdown in American history. A key question is how much an impact the decline in the stock market will have on capital gains invested in QOFs since there are fewer unrealized capital gains, which decreases the potential amount to be recognized and invested. However, the selloff created the unplanned recognition of capital gains for many, with many of those investors facing a decision as to whether to pay the full taxes or invest in OZs and defer payment while also helping distressed areas.

As they have since Novogradac began tracking the information, QOFs with a focus on residential and commercial OZ investment have raised the most equity. 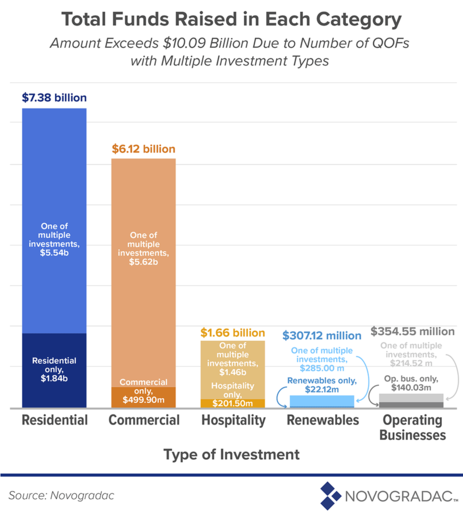 Funds with a commercial-only focus have raised $499.9 million, but those whose focus includes commercial have raised $6.12 billion, which is 60.7 percent of the total.

(Due to the number of QOFs with multiple areas of focus, the percentages add up to more than 100.)

The latest data shows that QOFs with a sole focus on operating businesses have raised $140.0 million and those with at least a partial focus on operating businesses have raised $354.5 million–or 3.5 percent of the total. That percentage is steady since early January, but an increase from 2.6 percent in October 2019 and 3.2 percent in December 2019.

Glickman is bullish on OZ operating businesses as an investment.

“Real estate has a natural cap on returns, making it unlikely for funds to have more than a two to four times multiplier over 10 years,” he said. “That’s not the case for operating businesses. This may be the heyday for operating business investment. We’re already seeing a movement toward that.”

QOFs on the listing with a nationwide focus for investment have raised $2.38 billion, which is 29.5 percent of the total of equity raised by QOFs that have revealed their geographic focus. 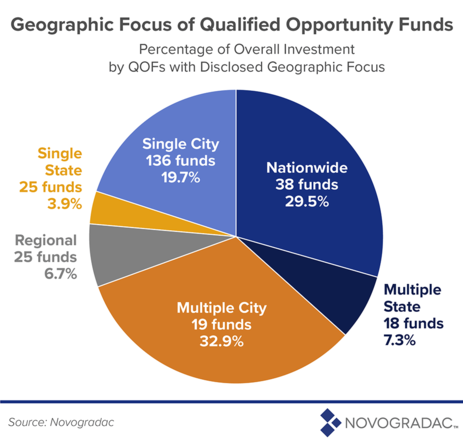 There are fewer QOFs with a multi-state, single-state or multi-city focus, but the 19 multi-city QOFs have raised $2.65 billion, which is 32.9 percent of the total for the QOFs that have disclosed their geographic focus.

As the nation emerges from the pandemic, there is optimism among many that the OZ incentive will be a key tool in the recovery effort.

“The expectation from a lot of observers is that this recession is going to happen, but it’s not structural, it’s circumstantial,” said Glickman. “We’re going to see a lot [of investment] go into private equity assets.”

To have information about your QOF included in the Novogradac Opportunity Funds List, email [email protected].