The National Park Service recently released its Annual Report on the Economic Impact of the Federal Historic Tax Credit for FY 2018. In partnership with Rutgers University, the report analyzes where federal historic tax credit (HTC) investments are located, who benefits from them, and what tangible economic impacts those investments have on communities. The report highlights a variety of HTC case studies including local movie theaters, historic hotels and many mixed-use spaces.

Brief Overview of the Historic Tax Credit and the Study

Administrated jointly at the federal level by the Department of the Interior’s National Park Service (NPS) and the Department of the Treasury, the HTC is a 20 percent federal tax credit that incentivizes the rehabilitation of historical structures, as determined by the NPS and meeting the Secretary’s rehabilitation standards. The HTC also promotes the economic revitalization of communities that are often older, smaller and more rural in nature as compared to communities generally. The economic analysis performed by Rutgers utilized the Preservation Economic Impact Model (PEIM), a tool developed at the university that analyses the influence of the HTC on a number of areas the most relevant to the study: jobs, income, wealth, output and taxes.

The economic returns of the HTC are multi-faceted, but job creation is a frequently highlighted benefit. Jobs were measured by the study as, “employment, both part- and full-time, by place of work, estimated using the typical job characteristics of each industry.” According to the report, in fiscal year (FY) 2018, 129,000 jobs were created as a result of the HTC. This exceeds the amount of jobs created in 2017 (107,000) by more than 20,000. The states that saw the largest job creation in 2018 include New York (15,452 jobs), Ohio (14,755), and Texas (10,054). This is similar to the 2017 trend, when New York and Ohio were in the top two, although in 2017 Louisiana was third (6,814 jobs). Most of the jobs created were in the construction, manufacturing and services sector. 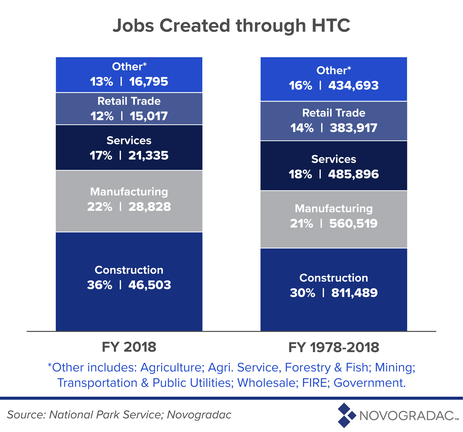 Other Benefits and Return on Investments

Beyond job creation, the HTC increases the gross domestic product (GDP), income, output and tax base of the communities in which it is used.

NPS reports that in 2018, historic rehabilitation expenditures resulted in $5.4 billion in income, $14.4 billion in output, $7.4 billion in GDP, and $2.0 billion in taxes. The chart below shows the 2018 impacts compared to the cumulative impacts. 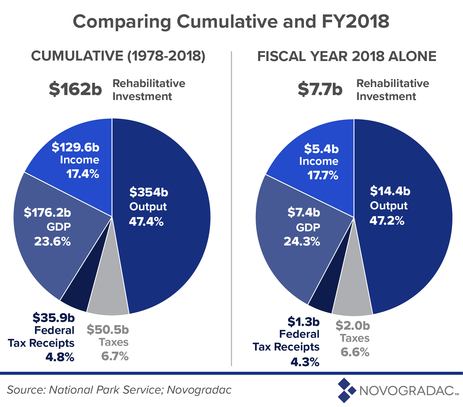 The cumulative outlay to the federal government (in 2018 dollars) is $30.8 billion in tax credits allocated by the Treasury. The HTC was found to yield a net benefit to the Treasury, as it has generated $35.9 billion in federal tax receipts over the life of the program. The graph below shows 2018’s GDP broken down by sector from federal HTC investment. Construction, manufacturing, and services continue to dominate. Similar trends are found when looking at income created by sector from HTC investment. 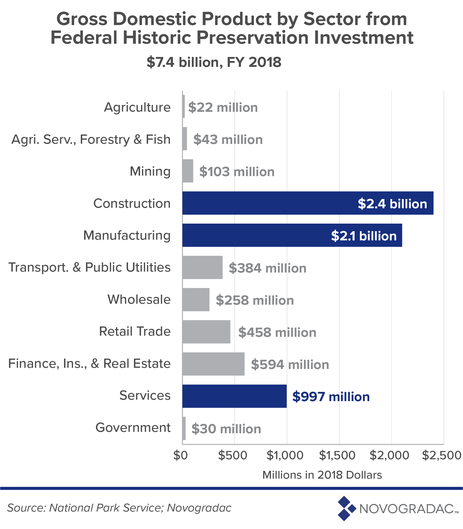 A common misconception is that the HTC only goes to large, expensive development projects in big cities, but the data reveals that this is not the case. The HTC is implemented frequently in smaller communities for smaller rehabilitation projects. Out of all the projects in FY 2018, 46 percent were less than $1 million and 18 percent were less than $250,000. NPS reports that smaller communities also benefit the most, as 82 percent of HT projects serve communities with a population of 500,000 or less. Further still, over one-third of all federal HTC projects were in communities with fewer than 100,000 residents. The graphic below shows the dispersion of projects in 2018 dependent on the size of the community. 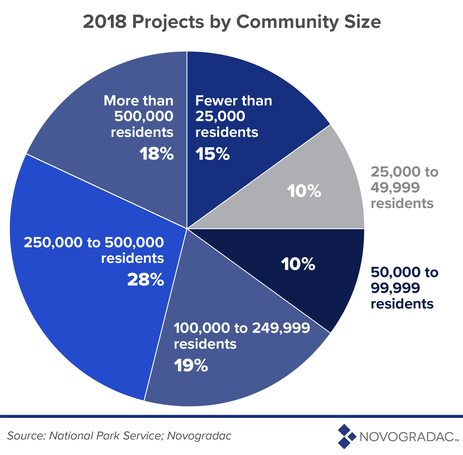 NPS’s annual report continues to demonstrate the value of the historical tax credit. Much like the low income housing tax credit, the HTC is a strong tool to encourage investment in areas that need it, and it has a multiplier effect. The HTC can also be paired with other tax incentives, such as opportunity zones and the new markets tax credit.

There are efforts underway to strengthen the incentive. In October, Sens. Bill Cassidy, R-La., Ben Cardin, D-Md., Susan Collins, R-Maine, and Maria Cantwell, D-Wash., introduced S. 2615, the Historic Tax Credit Growth and Opportunity (HTC-GO) Act. This bill would expand the HTC and encourage development of smaller, income-producing properties. A major provision of the bill is the elimination of the HTC basis adjustment requirements, which means the HTC would no longer need to be deducted from a building’s basis at the time of transfer. This change alone would place the HTC in line with other development credits and make it easier to use with low-income housing tax credit and Opportunity Zones. The Senate bill would also increase the HTC from 20 percent to 30 percent for properties with rehabilitation expenses of less than $3.75 million, making it easier for developers to meet the substantial rehabilitation test and creating greater flexibility for nonprofits to partners with developers. The HTC-GO Act is a companion to H.R. 2825, a similar, though not identical, bill introduced in May by Reps. Earl Blumenauer, D-Ore., Darin LaHood, R-Ill., Terri Sewell, D-Ala., and Mike Kelly, R-Pa.  H.R. 2825 includes all of the provisions of S. 2615 as well as another provision to allow certification of HTC for small transactions. If enacted, more HTC developments would become financial feasible, especially in small rural towns.

How and Why to Qualify HTC Development as Phased Rehabilitation
Keys to a Successful HTC Closing: Plan the Exit, Assemble a Good Team
African American Preservation as an Economic Development Tool
END_OF_DOCUMENT_TOKEN_TO_BE_REPLACED