NPS Report Finds Historic Tax Credit Contributed to $7.3 Billion in Investments in FY 2020, Provides Evidence How HTC Could be Made Even More Impactful with Legislation

In fiscal year (FY) 2020, the historic tax credit (HTC) created 122,000 jobs across the country, contributed $7 billion to the GDP, and generated $1.8 billion in tax revenue at the federal, state and local levels, according to the U.S. Department of the Interior’s National Parks Service (NPS) “Annual Report on the Economic Impact of the Federal Historic Tax Credits for Fiscal Year 2020,” a report that details the impacts of the HTC in FY 2020 and since the tax incentive’s enactment in 1979. The NPS partnered with the Rutgers University Center for Urban Policy Research in producing the report.

The many positive economic and preservation impacts of the HTC can be experienced by more communities if Congress passes legislation expanding the incentive.  In 2021, the House introduced the Historic Tax Credit Growth and Opportunity Act of 2021 (HTC-GO, H.R. 2294/S. 2266). The House version of the bill proposes temporarily increasing the HTC percentage to 30% for five years and phasing down for several years thereafter. Both House and Senate versions propose permanently increasing the HTC percentage to 30% for small projects, eliminating the HTC basis adjustment, lowering the substantial rehabilitation test to 50% instead of 100%, and amending the disqualified lease rules to make it easier for nonprofits to access the HTC. A permanent 30% HTC for small projects would be particularly beneficial to rural towns, since the fixed costs of HTC developments often make small projects financially infeasible with only a 20% HTC. While the NPS reported some small projects in FY 2020, many other smaller projects would have benefited from an increase to 30%. More details on this bill can be found in this previous Notes from Novogradac post.

The HTC provides owners of historic buildings a 20% federal tax credit if they undertake a substantial rehabilitation of a certified historical building and the structure is used for business or income-producing purposes while maintaining the original character of the building. Administered by the NPS with the help of the State Historic Preservation Offices, the HTC helps to revitalize historic communities across the country, including rural areas, and has had many positive economic impacts.

While the historic tax incentive was first adopted in 1976, it did not become a tax credit until 1979, as it functioned as an accelerated depreciation from 1976 to 1978. The 20% tax credit can be claimed ratably over five years as long as the certified historic building undergoes a substantial rehabilitation that keeps elements of its original character as defined by the Secretary’s standards and the building generates income.

Many states also have state HTC programs in addition to the federal HTC that are tracked by Novogradac. As under the federal HTC program, owners of historic buildings must complete a certified or qualified rehabilitation of the building to receive the state credits.

The HTC in 2020 had numerous positive economic benefits, as seen in the chart below. The HTC has also generated many positive impacts throughout its history: 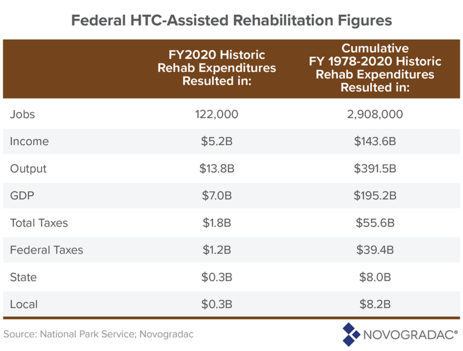 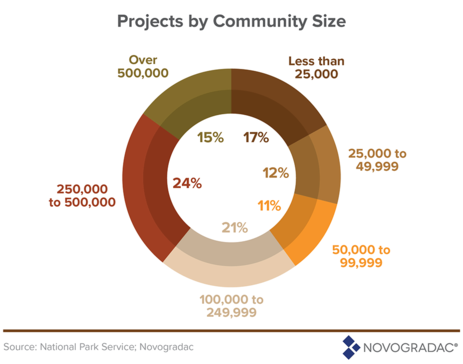 The HTC supports both large and small projects, as close to half of HTC-assisted projects cost less than $1 million, but projects under $250,000 are often difficult to pencil:

In FY 2020, the HTC had the largest positive impact on the construction sector, as the incentive helped to create 42,084 jobs, generated about $1.9 million in income and contributed about $2.3 million to the GDP. Manufacturing and services were the next two most impacted sectors while the agriculture, government, and agricultural services, forestry, and fishing sectors were the least impacted.

The HTC has had profound economic impacts since its inception. The NPS has certified more than 46,000 HTC projects since 1976 and the HTC has generated $181 billion in total rehabilitation investment. Its total positive economic impacts for 1978-2020 are highlighted below: 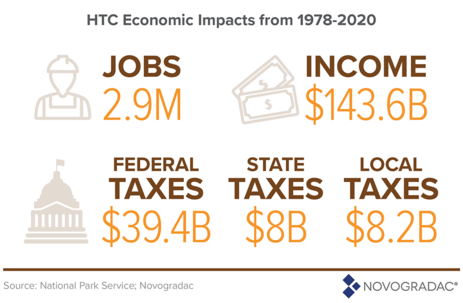 The impacts of the HTC in FY 2020 varied by state, for some states saw high levels of HTC-assisted investment while others did not see any. The report provided HTC investment data for the 50 states and Washington, D.C. 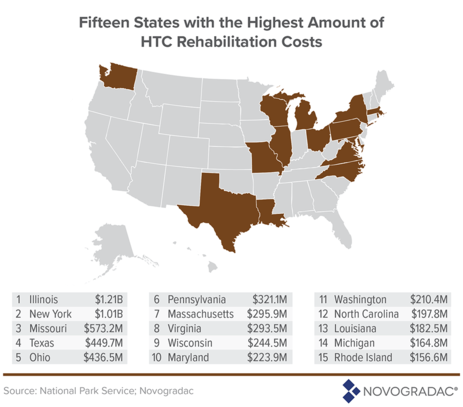 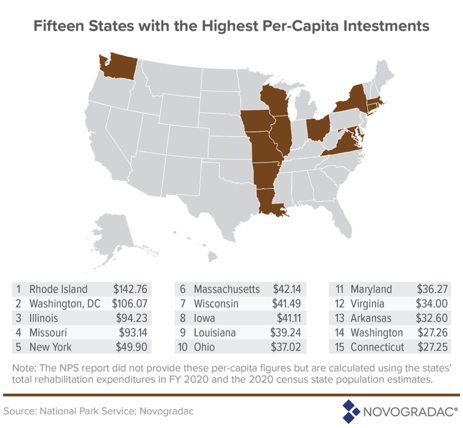 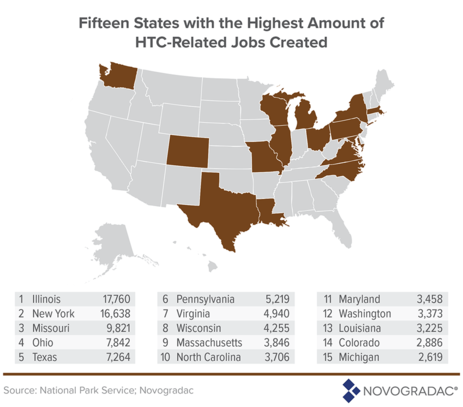 Though the version of the Build Back Better Act (BBBA) approved by the Ways and Means Committee in September 2021 included all of the HTC-GO proposals and included the Rehabilitation of Historic Schools Act (H.R. 4086), the version passed by the House (H.R. 5376) Nov. 19, 2021, did not include these provisions. More details about the provisions from the Ways and Means Committee-approved version of BBBA can be found in this Notes from Novogradac post.

While the BBBA is currently stalled in the Senate due to Sen. Joe Manchin, D-West Virginia, withholding support for the bill, it is still possible some HTC provisions may be added back to the BBBA, and a pared down version of BBBA could pass Congress in 2022. As Congress continues to negotiate on the BBBA and works to finalize FY 2022 spending after the current continuing resolution funding the federal government expires Feb. 18, there are opportunities for HTC provisions to be passed, either as part of a revised BBBA or in other tax legislation that could advance HTC provisions.