An observational study Novogradac & Company is conducting suggests anticipation of a reduction in the corporate tax rate has already reduced production of affordable housing by approximately 11 percent.

In December 2017, after passage of the tax bill, Novogradac estimated that a reduction in the corporate rate to 21 percent, along with other changes, would cause a reduction in value of the credit of about 14 percent.

The analysis is ongoing, but in reviewing comparative 2015 and 2017 data from 10 states, some clear trends have developed. This ongoing analysis will further refine the range estimates, but are not anticipated to alter the broader trends identified. Because calendar year 2017 has just ended, more complete analysis must await additional data from numerous states. 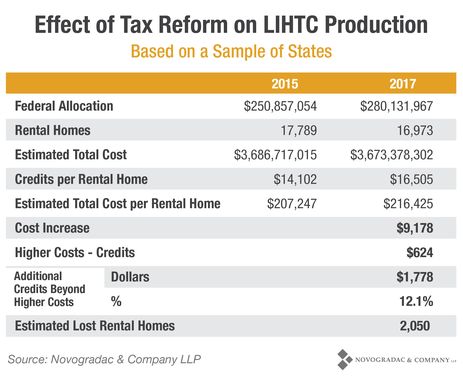 Novogradac’s analysis estimates the amount of additional tax credits, on average, that was awarded per unit of affordable housing in 2017 increased compared to that amount in 2015. Conceptually, this increase can be caused by a variety of factors, most notably an increase in construction costs and a reduction in the value of the tax credit. 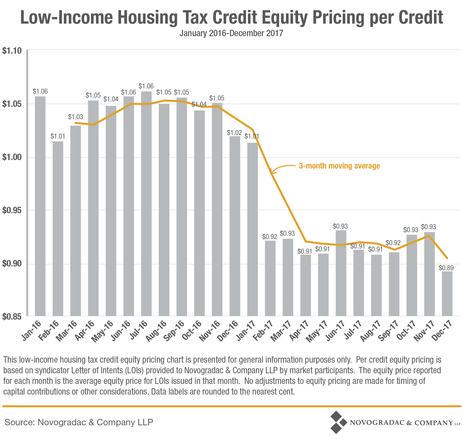 Preliminary results indicate that the aggregate loss of unit production due to the decline in the anticipated corporate tax rate for the states sampled is about 2,000 units, or from about 19,000 units down to about 17,000, a loss of about 10.5 percent.  This initial observational result is consistent with Novogradac’s earlier estimates.  Note, this data is a subset of states and a subset of credit activity within the states, excluding tax-exempt bond tax credit projects, for instance.  More specifically, tax credit allocations, per unit of affordable housing in our sample between 2015 and 2017 increased about 16 percent -to 17 percent, with the increase in tax credits attributable to higher costs in the range of 4 percent to 5 percent, and the increase in credits attributed to the decline in tax credit equity pricing estimated at about 12 percent.

This increase in allocation of tax credits per unit due to a decline in the value of the tax credit translates into a loss of about 11 percent of the number of affordable housing units produced or renovated and preserved. This initial observational result is consistent with Novogradac’s earlier estimates.

Because 2017 tax credit equity pricing was widely based on a 25 percent corporate tax rate underwriting assumption, Novogradac & Company anticipates the enacted 21 percent will lead to an additional decline of about 3 percent in affordable rental home production and preservation. The aggregate decline of housing production and preservation per dollar of tax credits attributable to the decline in the corporate tax rate is anticipated to be about 14 percent.

How OZs Can Support Affordable Housing Creation, Preservation
A Look at the LIHTC: Past Pricing Trends, the Current Market and Future Concerns
Is 2020 the Year to Pass Infrastructure Legislation that Includes Community Development Tax Incentives?
END_OF_DOCUMENT_TOKEN_TO_BE_REPLACED