With a potential investment deadline looming, funds formed to invest in opportunity zones (OZs) report having raised nearly $4.5 billion, according to the Novogradac Opportunity Funds Listing. The nearly $4.5 billion is 40 percent higher than Novogradac’s last report, about 50 days ago.  In terms of investment focus, residential continues to lead the way, and nearly 50 percent of capital raised is in funds with a national geographic focus.

The survey of investments in QOFs seeking capital from third-party investors is tracking 366 QOFs (27 percent more than the last report in late October), 184 of which have report having raised $4.46 billion at the time of this writing. There is success at the top: 12 QOFs on the Novogradac list report having raised at least $100 million each. Those top 12 funds report about $2.15 billion raised.

The information for the rolling survey comes from QOFs voluntarily providing information or from other public sources, including press releases. The Novogradac list doesn’t include proprietary or private funds owned and managed solely by their principal investors.

The actual dollars raised by QOFs are likely substantially higher than $4.46 billion. That’s because Novogradac’s Opportunity Funds Listing is a voluntary rolling survey and nearly half the QOFs being tracked haven’t disclosed their fundraising levels to us. There also are funds raising capital from third parties that are not part of the survey and the survey doesn’t include private QOFs formed by high-net-worth individuals, corporation and the like. It’s reasonable that the actual dollars raised to date are perhaps double or triple the $4.5 billion reported to date.

Treasury Secretary Steven Mnuchin said in 2018 that Treasury anticipated $100 billion in private capital, and revenue estimates from the Joint Committee on Taxation and the Office of Management and Budget imply investment of about $8 billion to $10 billion of capital gains in 2019.

As investors await the publication of updated Treasury guidance and the Dec. 31 deadline nears for investments to receive the maximum tax benefit under current regulations, investor appetite appears to be increasing.

In the October update of the Novogradac Opportunity Funds listing, residential and commercial investment were the top two areas in terms of equity raised. That hasn’t changed. 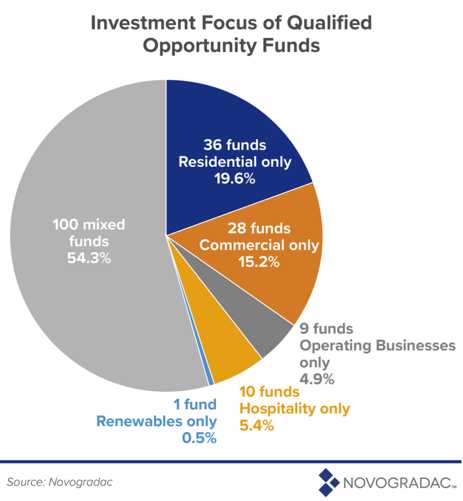 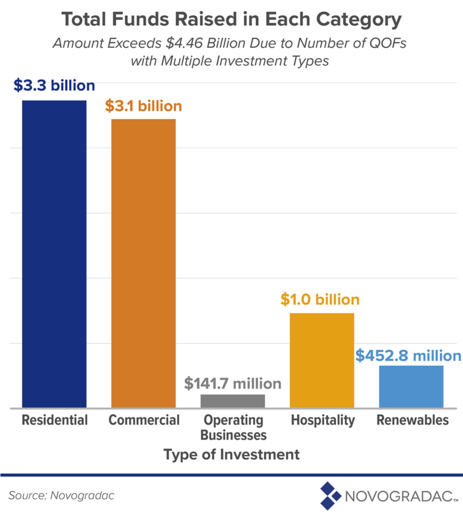 QOFs supporting operating businesses continue to lag in raising funds, as those with that as a singular or shared focus have raised just $141.7 million, or 3.2 percent of the total. That’s slightly better from the 2.6 percent in October.

The continuing low totals for operating businesses is a disappointment, although that is the only investment category that enjoyed a jump in percentage of the overall total since the October report.

Forty-seven of the 184 QOFs on the Novogradac list did not disclose their geographic focus. 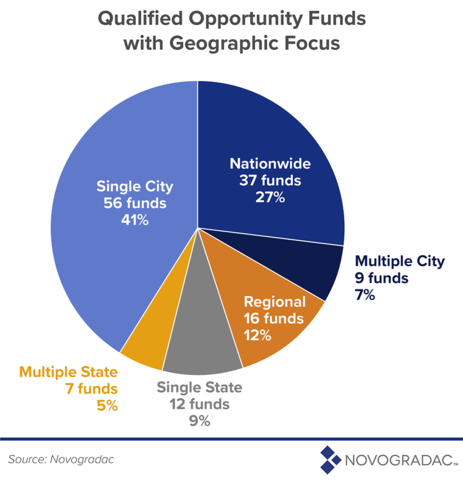 Supporters of the OZ incentive insisted early on that investment would be a boon to local communities. A breakdown of the cities targeted by the QOFs suggests that population isn’t the main driver (although New York City and Los Angeles hold the top two spots for amount of funds raised for a targeted city). Twenty cities will benefit from targeted QOFs that have raised at least $10 million each for investment.

Among states that benefit from QOFs with single-state emphasis, Maine is second–a state that ranks 42nd in the nation in population.

In addition to the single-city and single-state QOFs, nine QOFs focus on multiple cities and seven focus on multiple states. Neither of those groups of QOFs have raised more than 17 percent of the equity target.

The Treasury Department on Friday sent updated OZ guidance to the Office of Information and Regulatory Affairs, which will update and combine the first and second tranche of guidance. That review is expected to take three to six weeks before release by Treasury to the public.

The legislation requires investments to be made by Dec. 31, 2019, to be eligible for the maximum 15 percent reduction in capital gains for holding investments seven years (the legislation that created OZs requires that deferred gains be recognized by Dec. 31, 2026), so there will likely be significant end-of-year activity for many investors.  Under current proposed regulations some capital gains can’t be invested until Dec. 31, 2019, which means that there is the potential for a flurry of investments on the final day of the year, a Tuesday.

The next Novogradac Opportunity Zones Conference is April 23-24, 2020, in Long Beach. It will include information on QOFs and the updated Treasury guidance.

The information contained on this page is for informational purposes only and does not constitute an offer to sell or solicitation of an offer to buy securities. Novogradac does not provide investment advice and the information on this page is not to be construed as a recommendation to engage in any specific transaction. Readers are urged to consult with their own professional advisors if they are considering investing in a QOF.