Past Performance is no Guarantee of Future Results, but Maybe…

The COVID-19 pandemic will almost certainly result in an economic recession, although the magnitude is unclear. Conventional wisdom suggests that owners of low-income housing tax credit (LIHTC) properties will face a decrease in occupancy rates and rental income.

However, a look at the Great Recession of 2007-2009, America’s biggest economic slowdown since the Great Depression of 1929-1939, brings reason for cautious optimism concerning the ability of LIHTC properties to withstand a significant economic downturn. During the nation’s most recent major economic slowdown, affordable housing occupancy rates and rental income remained relatively stable and recovered more quickly than other real estate categories. That meant that despite the widespread economic difficulties, low-income tenants could remain in affordable housing at restricted rents.

The related optimism is not to suggest that this recession will be exactly like the last (perfect comparisons do not exist), but a look back is informative.

Following is information about occupancy rates before, during and after the Great Recession for the nation, based on Novogradac’s proprietary database of operating results from surveys of affordable and market properties. For more detailed information, including an analysis on rent, see Novogradac’s special report, “LIHTC Lessons from Great Recession: Data Shows Occupancy Rates, Rental Income for Affordable Housing Properties Were Steady During Economic Downturn.” The special report provides greater detail than this blog post, including rent levels and occupancy rates for specific metropolitan statistical areas during the period.

The surveys from which the data comes are for Novogradac’s core market study and appraisal practice. The database was implemented in 2005 and contains more than 100,000 individual properties.

National Occupancy: A Dip, then Growth 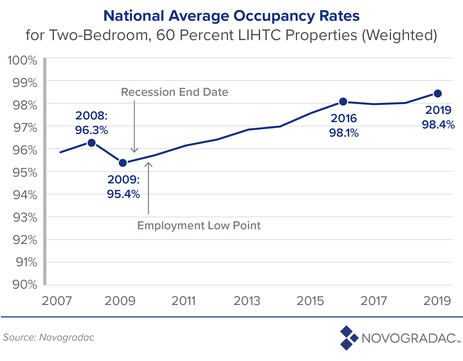 The national occupancy rate for two-bedroom, 60 percent area median income (AMI) LIHTC properties dipped slightly during the Great Recession, but began a rebound after 2009. In 2008, the occupancy rate was at 96.3 percent and the rate dropped less than 1 percentage point during the slowdown, slumping to 95.4 percent in 2009 before beginning a gradual increase through 2019.

As the nation faces a likely economic recession related to the COVID-19 pandemic, there is reason for optimism for LIHTC residents, developers and investors. A look back at America’s last great economic crisis shows that the effects on LIHTC properties were milder than for most parts of the economy and the impact didn’t last long.